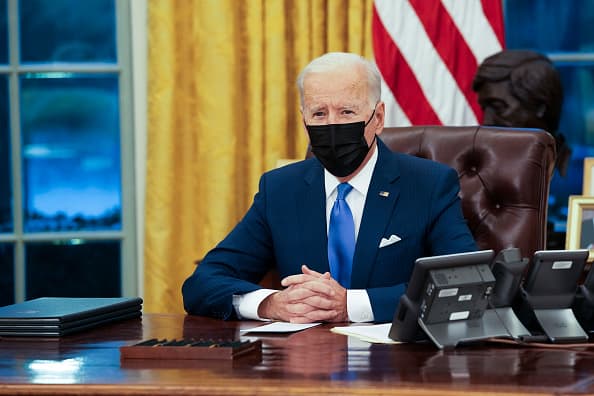 President Joe Biden makes brief remarks before signing several executive orders directing immigration actions for his administration in the Oval Office at the White House on February 02, 2021 in Washington, DC.Doug Mills | Getty ImagesPresident Joe Biden is expected to announce Thursday that his administration has secured deals for another 200 million doses of Covid-19 vaccine, the Washington Post reported Thursday, citing three sources.Biden is expected to make the announcement while on a tour at the National Institutes of Health later Thursday, according to the Post. The White House and the NIH didn’t immediately respond to requests for comment. The president arrived at the U.S. agency mid-afternoon Thursday.The new deals would bring the total number of doses to 600 million, enough to inoculate 300 million people. Both Pfizer’s and Moderna’s authorized vaccines require two doses given about three to four weeks apart.Biden is trying to pick up the pace of vaccinations in the U.S. after a slower-than-expected rollout under former President Donald Trump’s administration. Roughly 34.7 million out of some 331 million Americans have received at least their first dose of Pfizer’s or Moderna’s two-dose Covid-19 vaccines, according to data compiled by the Centers for Disease Control and Prevention. And 11.2 million of those people have already gotten their second shot.States have complained that demand for the vaccines is outpacing supply.This is breaking news. Please check back for updates.