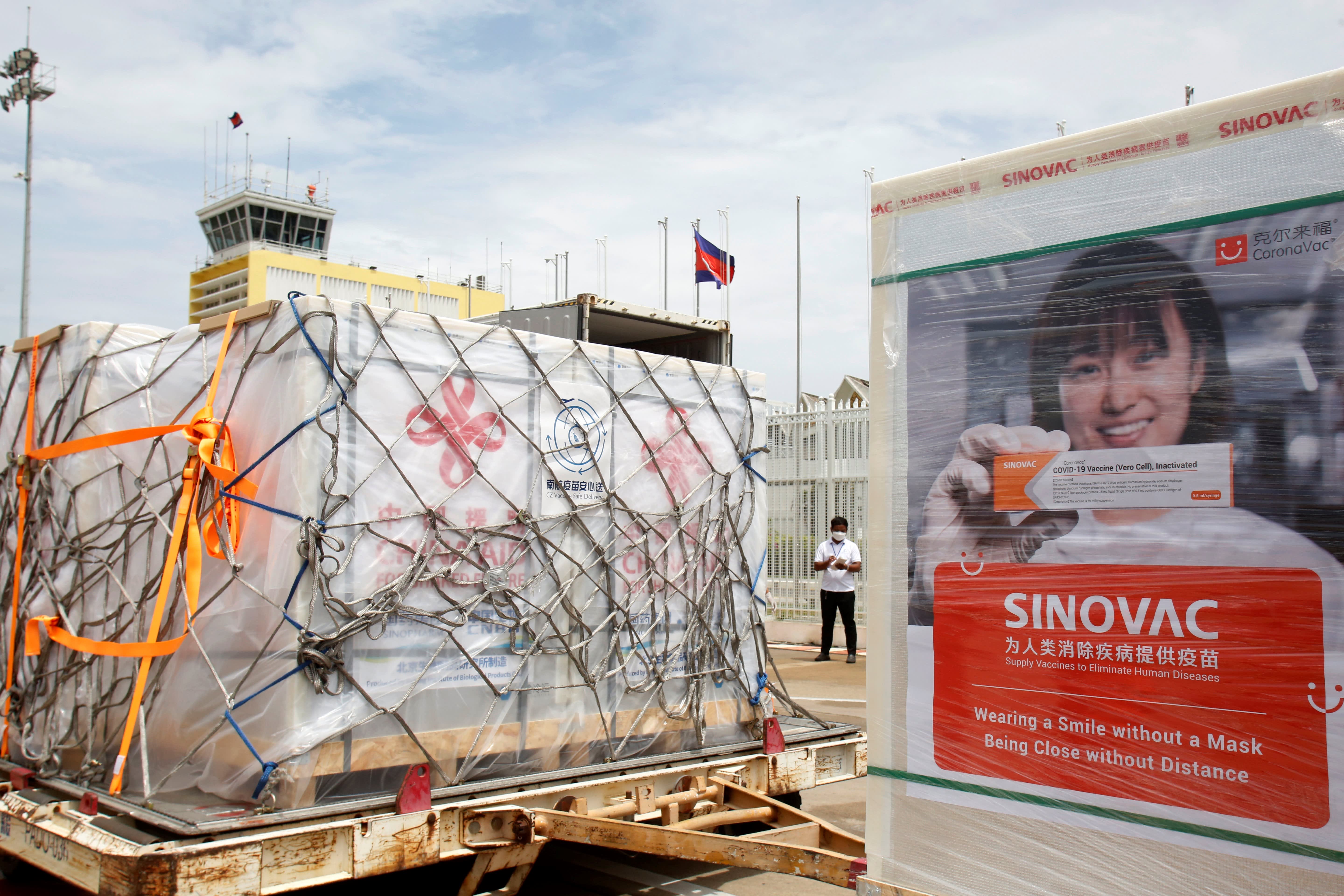 Covid-19 vaccines by Chinese firms Sinopharm (left) and Sinovac arrived at the Phnom Penh International Airport in Cambodia on June 8, 2021.Sovannara | Xinhua News Agency | Getty ImagesAmong countries with both high vaccination rates and high rates of Covid-19 infection, most rely on vaccines made in China, a CNBC analysis shows.The findings come as the efficacy of Chinese vaccines faces growing scrutiny, compounded by a lack of data on their protection against the more transmissible delta variant. CNBC found that weekly Covid cases, adjusted for population, have remained elevated in at least six of the world’s most inoculated countries — and five of them rely on vaccines from China.CNBC identified 36 countries with more than 1,000 weekly new confirmed cases per million people as of July 6, using figures from Our World in Data, which compiles information from sources including the World Health Organization, governments and researchers at the University of Oxford. CNBC then identified countries among those 36 where more than 60% of the population has received at least one dose of Covid vaccine.Those countries numbered six, and five of them use Chinese vaccines as a significant part of their national inoculation programs: United Arab Emirates, Seychelles, Mongolia, Uruguay and Chile. The one country among them that doesn’t depend on Chinese vaccines is the United Kingdom.Meanwhile, the United Kingdom has approved vaccines by Moderna, AstraZeneca-Oxford, Pfizer-BioNTech and Janssen. U.K. Covid cases have spiked in recent weeks as the more transmissible delta variant has spread there.Sinopharm and Sinovac did not respond to CNBC requests for comment.Several factors can cause a surge in Covid cases in countries with high vaccination rates. Vaccines don’t offer 100% protection, so those who are inoculated can still be infected. At the same time, new variants of the coronavirus could prove better at overcoming vaccines.The best option for many countriesCountries should not stop using Covid-19 vaccines from China, epidemiologists say, especially while the supply of vaccines is limited among low- and middle-income nations.Many of the countries and territories that approved vaccines by Sinopharm and Sinovac are developing nations that can’t compete with wealthier countries for vaccines developed in the United States and Europe.Ben Cowling, a professor at The University of Hong Kong’s School of Public Health, said countries may decide to use certain vaccines depending on their long-term objectives.”Some countries may accept a low level of circulation as long as there are relatively few severe cases and deaths from COVID-19,” Cowling, who heads the school’s epidemiology and biostatistics division, told CNBC in an email. “That should be achievable with high coverage of any of the available vaccines.”Still, some countries are steering clear of China’s vaccines. Costa Rica last month rejected a delivery of vaccines developed by Sinovac after concluding it isn’t effective enough.WHO approval   The World Health Organization approved vaccines from Sinopharm and Sinovac for emergency use.The effectiveness of the two Chinese vaccines is lower than that of Pfizer-BioNTech and Moderna, both of which have shown more than 90% efficacy.Sinopharm’s vaccine has an efficacy of 79% against symptomatic Covid infections, the WHO says, but its effectiveness among certain groups — such as people 60 and older — isn’t clear. The efficacy of Sinovac’s shot has come in at around 50% to higher than 80%, depending on the country where trials were held.Experts say findings between clinical trials can’t be compared directly, because each trial is set up differently. But a Hong Kong study found “substantially higher” antibody levels in people that received the BioNTech shot, compared with those who got the Sinovac vaccine, the South China Morning Post reported.Some experts suggest that the technology behind the different Covid vaccines could explain variations in their effectiveness.Sinopharm and Sinovac’s vaccines trigger an immune response by exposing the body to a weakened or “inactivated” virus — a tried and tested method that has been used by vaccines for decades. Pfizer-BioNTech and Moderna based their vaccines on a technology called messenger RNA, which instructs the body to make viral proteins that induce an immune response.”Inactivated vaccines are easy to manufacture and are known for their safety, but tend to produce a weaker immune response compared to some other vaccine types,” Michael Head, senior research fellow in global health at the University of Southampton in the U.K., wrote in an article published on The Conversation website.Still, large phase three clinical trials showed that inactivated vaccines have “high efficacy against severe disease and death” from Covid, said Cowling.The professor told CNBC that the spikes in Covid cases among some countries that use Chinese vaccines “tend to be surges in mild infections with very few severe cases in fully vaccinated individuals.”‘Herd immunity’When vaccines have lower efficacy, more people need to be inoculated to reach “herd immunity.” That happens when the virus no longer transmits rapidly because most people are immune from having been vaccinated or having recovered from an infection.Some countries decided to try to achieve reach herd immunity early in the pandemic, but no countries are known to have succeeded. Some that said they would reach herd immunity, such as Sweden, wound up being hit much harder by Covid than neighboring countries that went the vaccination route.A study the University of New South Wales’s Kirby Institute in Sydney claimed that in the Australian state of New South Wales, herd immunity could be achieved if 66% of the population received vaccines with 90% efficacy against all infection. The proportion of the population that needs to be vaccinated rises to 86% if the vaccine efficacy is 70%, and herd immunity is not achievable if the vaccine efficacy is below 60%, the study showed.