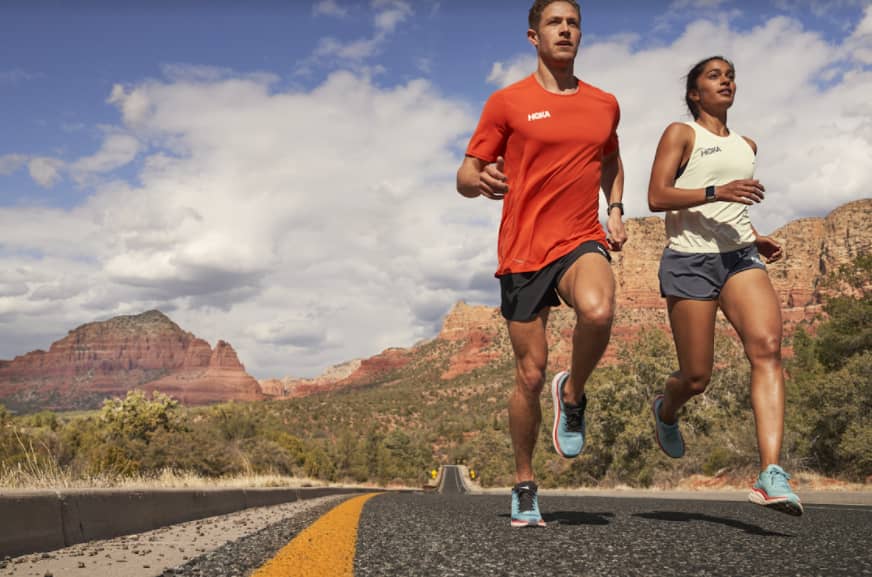 Hoka’s sales recently surpassed those of its sister brand Ugg for the first time in Deckers’ history.Source: HokaSneaker brand Hoka, famous for its cushioned running shoes, is opening its first-ever retail locations Wednesday as it bets on bricks and mortar to help fuel greater growth for parent company Deckers.Hoka President Wendy Yang told CNBC the shoe maker will open its doors to shoppers at a location on 5th Avenue in the Flatiron neighborhood of New York City and a shop on Melrose Avenue in West Hollywood, California.The brand has signed shorter-term leases on the two shops, Yang said, but will likely look to extend the agreements.”We want to learn more directly from the consumer … about what they like, what they want and how their decision process works, in a one-on-one way,” Yang said. “The biggest thing is creating a conversation with consumers in-person and letting them experience the benefits [of Hoka] before purchasing.”The shops offer 3D foot-scanning devices to help with sizing. There also are lockers where customers may stow their belongings and test out shoes by taking a run in the area.Hoka’s investments are part of a bigger direct-to-consumer push in the footwear industry, as brands from Nike to New Balance to On Running to Allbirds get closer to their customers. Nike, for example, is pulling out of unsuccessful wholesale channels and spending more to revamp its stores and website. On Running opened its first store in December in the SoHo neighborhood of New York City, widening its distribution beyond the department stores and specialty running shops where customers can find its sneakers.The running shoe business has, notably, outperformed other types of athletic footwear during the past year and a half, according to NPD Group senior industry advisor Matt Powell. As more dollars pour into the category, brands such as Under Armour and Puma are paying closer attention to running than they have before. Allbirds debuted a running shoe in April 2020, another vote of confidence in the space.”Up until the pandemic, running had not been very good for about eight years,” Powell said. “But there’s no question more people are running. Whenever we’ve been in periods with a lot of people out of work, we always see running shoes, or running as an activity, revive.”Hoka’s latest financial results are evidence of the shift. While the brand also sells hiking boots and sandals, it’s known for its vast assortment of running footwear. Hoka’s revenue in the three-month period ended June 30 surged 95% to $213.1 million from $109 million a year earlier. (Deckers’ sales rose 78% to $504.7 million during the same period.)Hoka’s sales also impressively surpassed those of its sister brand Ugg for the first time in Deckers’ history, the company said when it reported its fiscal first-quarter results.”Five or six years ago, the only people buying Hoka were the runners that were in the know,” Yang said. “They were the early adopters that were trying this new, kind of crazy shoe. But that’s not the case now.”According to Powell, younger consumers are also increasingly buying running shoes as streetwear, not necessarily for running. And that should drive further growth in the category in the coming quarters, he said.Sales of performance running footwear in the U.S. grew by about one-third in the first half of the year, according to data from NPD Group. Hoka’s sales rose about 90%, while On Running’s revenue tripled, the market research firm said.Deckers’ shares are up about 47% year to date. The company has a market value of $11.7 billion.