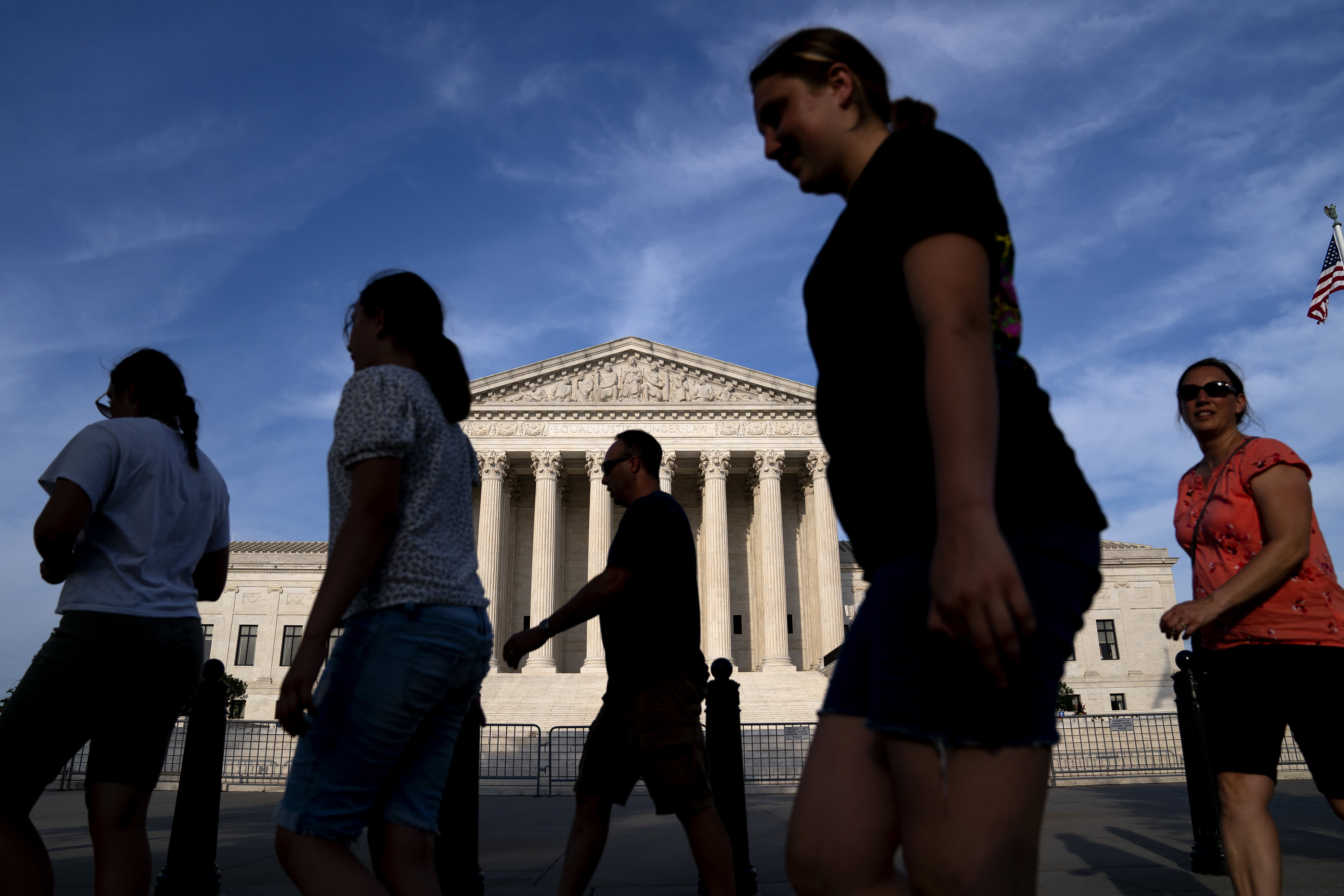 Pedestrians walk past the U.S. Supreme Court in Washington, D.C., U.S., on Sunday, June 20, 2021.Stefani Reynolds | Bloomberg | Getty ImagesA group of abortion providers and advocates including Planned Parenthood is asking the Supreme Court to temporarily block the enforcement of a Texas law that would ban most abortions after as early as six weeks of pregnancy.Petitioners say the law, which is set to take effect Wednesday, would essentially overturn the precedent set by Roe v. Wade, the landmark 1973 case that enshrined the right of women to choose to have an abortion.In response, a group of Texas officials including Attorney General Ken Paxton urged the high court to deny their opponents’ bid to thwart the law, calling the request “audacious.”If the Supreme Court does not intervene, the law will go into effect at 12 a.m. CT, according to SCOTUSblog.S.B. 8 was signed into law in May by Republican Gov. Greg Abbott. It prohibits doctors from performing or inducing abortions if they have “detected a fetal heartbeat for the unborn child,” except in medical emergencies.CNBC PoliticsRead more of CNBC’s politics coverage:The law prohibits state officials from enforcing those rules. Rather, it empowers any individual to file civil lawsuits against anyone who provides abortions or “aids or abets” them after the detection of a heartbeat. Those lawsuits can yield at least $10,000 in “statutory damages” per abortion.If allowed to take effect, the law “would immediately and catastrophically reduce abortion access in Texas, barring care for at least 85% of Texas abortion patients” and likely forcing many providers to close down, said the emergency request for an injunction filed Monday.That application was filed directly to conservative Justice Samuel Alito, who handles requests from the Lone Star State. It was submitted days after a lower appeals court refused to block the implementation of the law.Alito had asked the respondents to respond to the appeal by Tuesday at 5 p.m. ET.”In less than two days, Texas politicians will have effectively overturned Roe v. Wade,” Center for Reproductive Rights CEO Nancy Northup, whose organization helped file the Supreme Court request, said in a statement Monday.The Supreme Court, which in the wake of former President Donald Trump’s administration comprises a 6-3 conservative majority, is already scheduled to hear arguments in a potentially pivotal abortion case from Mississippi. That state has asked the justices to reconsider existing precedent that stops states from banning abortions that occur prior to fetal viability.This is developing news. Please check back for updates.