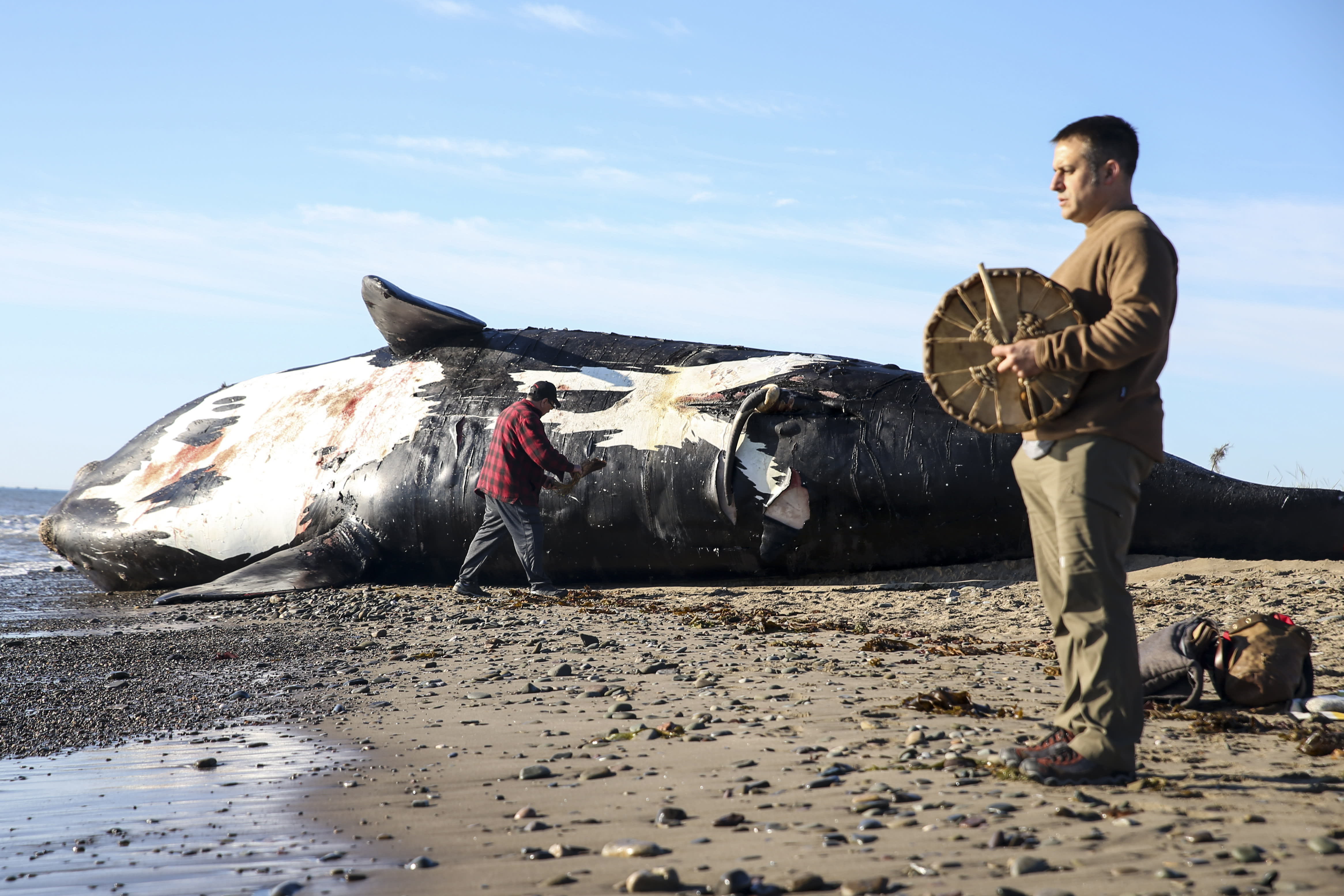 Patrick Goguen, right, an Acadian from Moncton, beats on a drum while Noel Milliea, an elder from Elsipogtog First Nation, performs a ceremony on the dead right whale to honor the animal’s spirit before a necropsy is performed on June 7, 2019.Nathan Klima | Boston Globe | Getty ImagesThe North Atlantic right whale has become critically endangered as warming temperatures push the species northward to cooler waters near major ports, where it often dies from vessel strikes and entanglement in fishing gear. Fewer than 250 mature North Atlantic right whales were estimated to be alive at the end of 2018, with the total population having plummeted by 15% over the last decade, according to an update from the International Union for Conservation of Nature on its “red list” of threatened species. Rising sea temperatures driven by climate change are causing the whales’ main food supply of krill to move into the Gulf of St. Lawrence. Following their prey, the whales swim out of protected maritime zones into unprotected zones closer to major ports along the Atlantic seaboard, where they collide with ships and die ensnared in nets. The Earth is in the midst of a mass extinction, and scientists warn that extinctions are accelerating at an astonishing rate: More than 500 species will likely go extinct over the next two decades. Commercial whalers had hunted right whales in the Atlantic almost to extinction by the early 1890s. While whale hunting is no longer a threat to the population and official protections were established in 1949, the population never recovered due to continued human threats. Fishing gear entanglement and vessel strikes are among the leading causes of North Atlantic right whale death, according to the National Oceanic and Atmospheric Administration. More than 2% of the entire North Atlantic right whale population has died in 2019. In addition to right whales, the IUCN gave updates on other species in serious decline primarily due to human activity and environmental degradation. Nearly a third of lemur species are on the brink of extinction driven by forest destruction through slash and burn agriculture logging for charcoal and fuel wood. The European Hamster is also now critically endangered, with possible drivers including industrial development, global warming and light pollution. Overall, more than 32,000 species are now threatened with extinction from human impacts like deforestation, pollution and climate change, according to the IUCN. “The dramatic declines of species such as the North Atlantic Right Whale included in today’s IUCN Red List update highlight the gravity of the extinction crisis,” Jane Smart, global director of the IUCN Biodiversity Conservation Group, said in a statement. World map providing approximate representation of the North Atlantic right whale’s range.NOAAResearch shows that more than 85% of right whales have been entangled in fishing gear at least once and roughly 60% have been entangled more than once. Ocean noise pollution from human activity also negatively impacts whale communication and leads to higher stress rates, which can drive decreased lifespans. Researchers suggest several ways to mitigate whale mortality, including passing legislation that would expand protected zones in the ocean, restrict the speed of ships and reduce the areas where fishing is allowed during migratory season for right whales.”These findings really bring home the urgent need for an ambitious post-2020 biodiversity framework that drives effective conservation action,” Grethel Aguilar, IUCN Acting Director General, said in a statement.

Australia advises citizens not to travel to Hong Kong due to national security law
Outbreak of dengue fever in Southeast Asia is ‘exploding’ amid the coronavirus fight
To Top
error: Content is protected !!