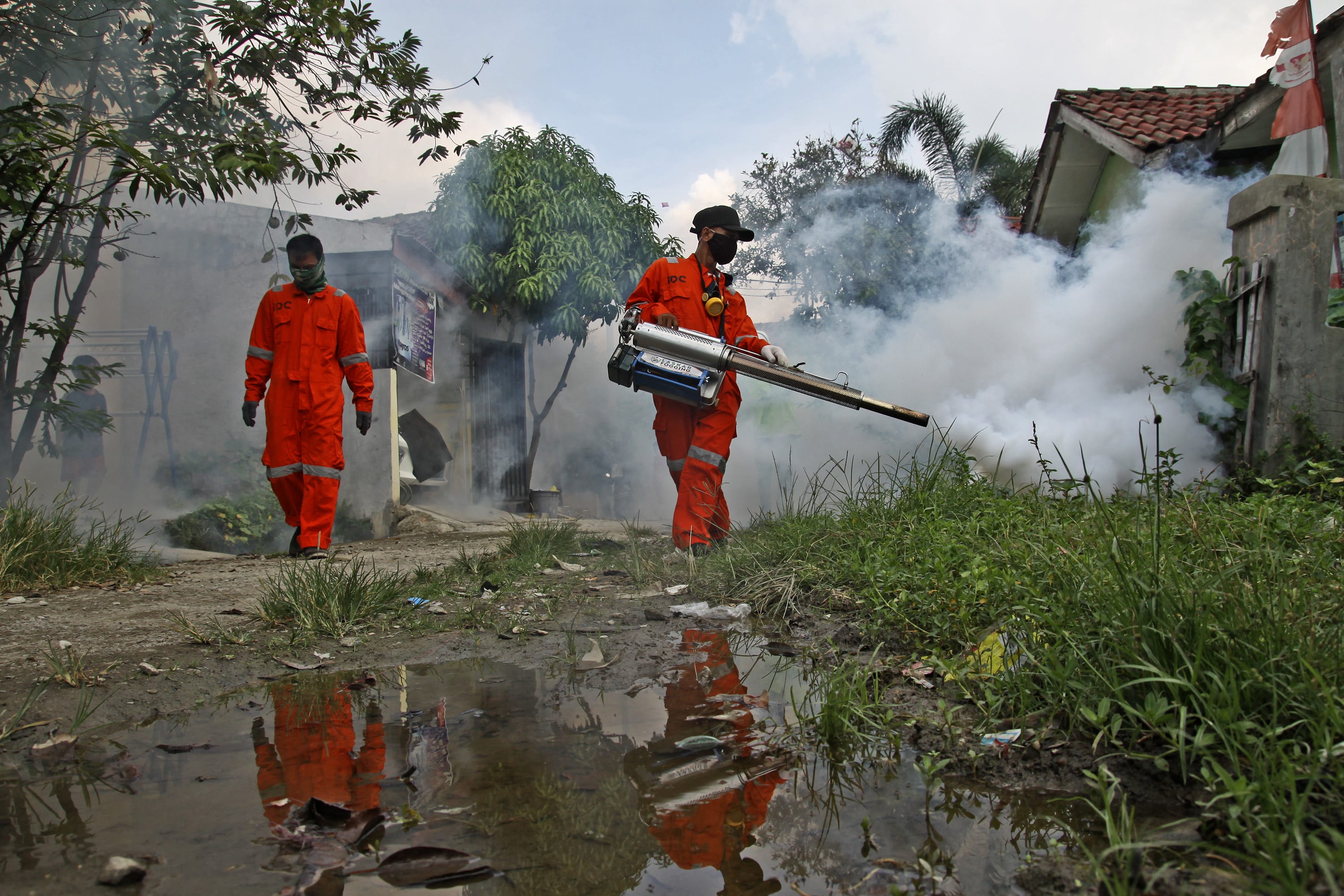 Municipal workers fumigates an areas of housing complex against Aedes Aegypti mosquitos as a measures to control a dengue outbreak amids Covid-19 pandemic in Wanasari village, Bekasi regency, West Java province, on May 6, 2020.Aditya Irawan | NurPhoto via Getty ImagesThere’s no respite for Southeast Asian nations.With health-care systems already under strain due to the coronavirus pandemic, countries like Singapore, Malaysia and Thailand are also grappling with another infectious disease outbreak: dengue fever.”We are seeing exploding numbers of dengue in South East Asia,” Dr. Leong Hoe Nam, a Singapore-based infectious diseases physician at Mount Elizabeth Novena Hospital, told CNBC in an email.Dengue fever is spread by mosquitoes and can cause fever, muscle and joint pain, severe headaches and even death in its most severe form.Singapore’s National Environment Agency (NEA) said last week that the island nation is set to surpass its previous annual record number of 22,170 dengue fever cases in 2013. As of July 6, more than 15,500 dengue cases have been reported in Singapore, according to the NEA.The more cases there are, the more likely uninfected mosquitoes will bite the infected individual, causing a spiraling of cases upwards.Dr. Leong Hoe NamMount Elizabeth Novena Hospital”There is no doubt that it is going to be a bad year,” said Leong, commenting on the situation in Singapore even before the NEA announcement.Elsewhere in the region, Malaysia’s health director-general warned last month of a spike in dengue cases across the country, local media reported. In Indonesia, Southeast Asia’s most populous country, local health officials said in late June there were 68,000 cases of dengue fever countrywide.According to the U.S. Centers for Disease Control and Prevention, the dengue fever risk in most Southeast Asian countries — with the exception of Singapore — is classified as “frequent/continuous.”Dengue’s ‘best marriage partner’The spike comes at a time when the world is battling the coronavirus pandemic that has left global economies battered and millions sheltered at home as a result of social distancing measures aimed at curbing the disease.”Unfortunately dengue met the best marriage partner — lockdown,” Leong said. “With individuals staying at home (because of covid), more are exposed to the dengue mosquitoes breeding in the neighbourhood.””The more cases there are, the more likely uninfected mosquitoes will bite the infected individual, causing a spiraling of cases upwards,” he said.Dr. Duane Gubler, founding director of the Emerging Infectious Diseases Signature Research Programme at Duke-NUS Medical School in Singapore, agreed.”People who are stuck at home all the time probably have greater contact with mosquitoes that are infected with dengue,” Gubler said, warning that “greater precautions” needed to be taken to control mosquito larvae.Furthermore, Gubler also flagged the danger of construction areas and said they were a “major breeding site” for mosquitoes, as a result of coronavirus lockdowns.”The Covid epidemic could very well be influencing dengue transmission,” he said.Among the Southeast Asian nations, Indonesia currently has the highest number of coronavirus cases at 70,736, according to data compiled by Johns Hopkins University. That’s followed by the Philippines which has 51,754 cases and 45,423 reported infections in Singapore.Leong said countries that better controlled the spread of dengue in the past could suffer more this time around.To compare infection rates, specialists use a metric known as “Dengue seroprevalence at aged 9 years,” according to Leong.”In Singapore, less than 9% of the children had Dengue at the age of 9,” he said, referring to that metric. “The figures in the neighbouring countries are way higher: 30-40% in Malaysia, 50-60% in Thailand and Indonesia, 90% in the Philippines.”For countries such as the Philippines, Leong said: “I don’t think it can get worse.”Instead, it is countries such as Singapore and Malaysia that have “a lot more to lose,” he warned. The lower levels of herd immunity in the general population make it easier for mosquitoes to find individuals with no prior immunity and spread the infection, Leong said. Herd immunity refers to the situation where a sufficiently high portion of the community has developed a resistance to a disease through prior exposure to an infection, lowering the chance for it to spread from person to person.’Critical’ rainy seasonLooking ahead, Gubler said countries in the region that are above the equator are “going into a critical time” as they enter the rainy season — usually between July and November. That period coincides with increased transmission for dengue fever, said Gubler.”My concern stems from the fact that countries do not have the public health infrastructure to deal with either disease, especially dengue,” Gubler said.He said that with the exception of Singapore, most Southeast Asian countries have failed to control the spread of dengue.”Every endemic country really needs to take the responsibility to build their own public health infrastructure to deal with diseases like dengue,” Gubler said. People also need to be educated as well, so that there is sustainability to the programs introduced, he added.