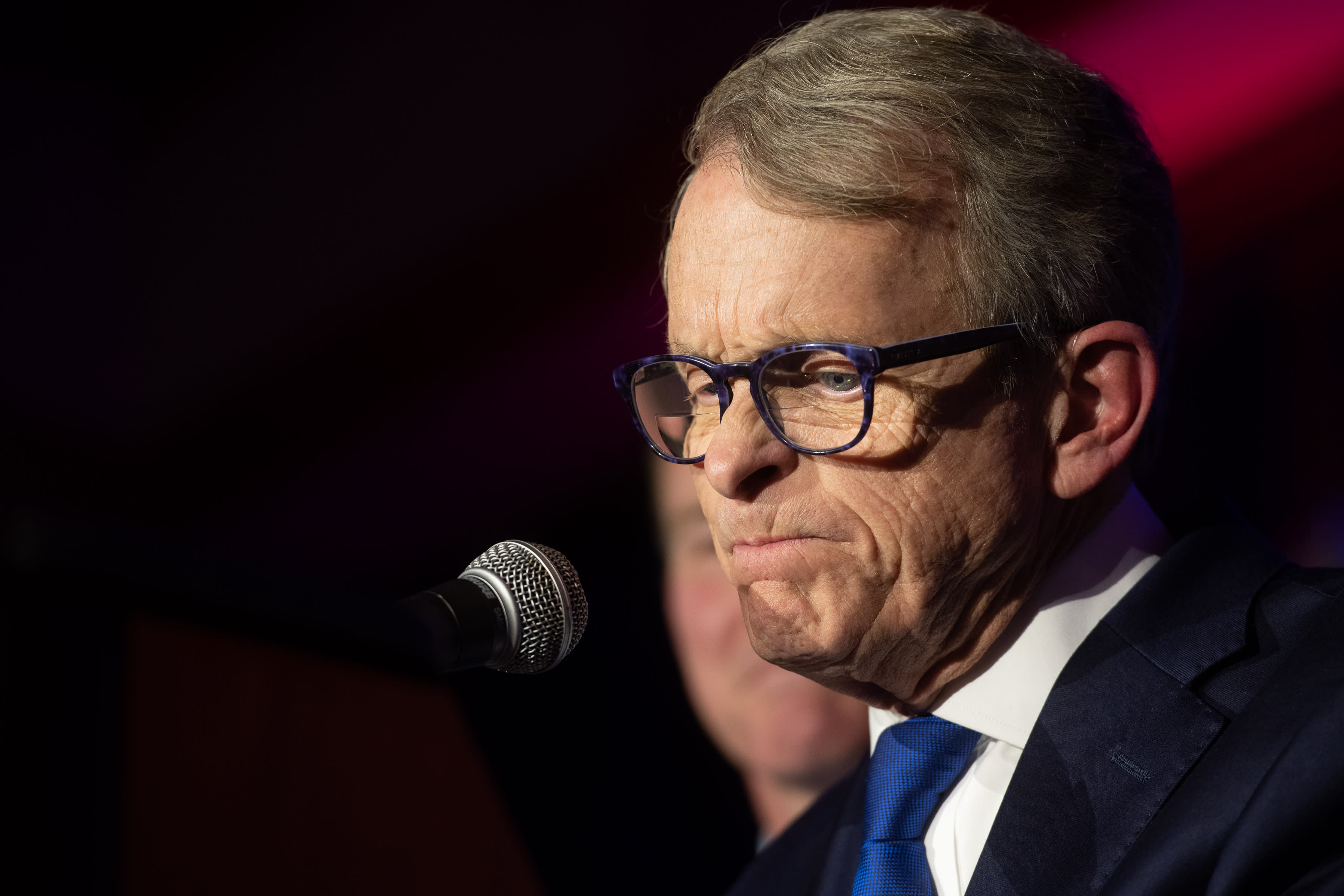 Ohio Republican Gov. Mike DeWine said Sunday that while his administration has stopped short of issuing a statewide mask ordinance, he’s not ruling out implementing that step as coronavirus cases continue to surge in the state. “We’re going the wrong way,” Dewine said of the outbreak in Ohio during an appearance on NBC’s “Meet the Press” on Sunday. But DeWine pushed back that the recent surge in the state’s number of confirmed Covid-19 cases was due entirely to a lack of a statewide mask mandate. “I don’t think anybody in Ohio who’s watched what I’ve done over the last four months doubts that, you know, I’ll do what we need to do to protect Ohioans,” DeWine told NBC’s Chuck Todd, adding that he “certainly would not rule out going statewide. We’re certainly looking at that.”  Earlier this month, Ohio was reporting more than 1,000 people falling ill with the virus daily, though that appears to have trended downward in recent days, with only 524 reports of an onset of Covid-19 for Friday. However, the Ohio Department of Health confirmed Friday the state’s total cases increased by 1,679, which includes people who fell ill on different days.  The day before, the total number of confirmed cases in the state increased by 1,290. More than 9,500 people have been hospitalized in Ohio since the pandemic hit the state and at least 3,174 residents have died from the virus.  “We’re very, very concerned,” DeWine said, but added that protecting the public is not just about issuing mask mandates. “It’s not all about orders. Orders are important. But it’s also about getting people to understand, ‘Hey, this is very, very serious,'” he said. “We are at a crucial stage. We are at the point where we could become Florida,” DeWine said. Last Sunday, Florida reported more than 15,000 Covid-19 cases, the highest daily total recorded in any U.S. state since the pandemic began.Florida has more than 350,000 total cases, according to the state’s health department. Those levels are higher than several major countries with much larger populations such as Italy and Spain. Overall, the U.S. has over 3.7 million confirmed cases and at least 140,294 people have died, according to data compiled by Johns Hopkins University.Rather than issue a statewide mask mandate, DeWine and the Ohio Department of Health issued an order earlier this month that required all counties that are designated as a Level 3 or Level 4 public health emergency in regards to the level and spread of Covid-19 cases to require face coverings. About 60% of the state is currently under a mask ordinance as the state’s total number of cases pushed past 74,900 as of Sunday. Ohio, which had a gross domestic product of $698 billion in 2019 and ranks in the top 10 of CNBC’s most recent annual America’s Top States for Business study, instituted a statewide shelter-in-place order that closed nonessential businesses for nearly six weeks. The state then started a phased-in reopening plan on May 1, allowing health-care facilities to resume providing medical services that did not require overnight stays.Manufacturing, retail, dining, and personal services such as salons, opened gradually throughout May, with limitations placed on capacity and guidelines issued around safety and social distancing. Although most Ohio businesses have reopened, the state has not yet allowed K-12 schools to resume and has also kept entertainment venues, sports stadiums and areas, and certain recreational sports closed for now.  “When we reopened, we were one of the first states to put in place a very sophisticated policy about how you reopen,” DeWine said. But Ohio’s response to the pandemic has not been without controversy. Protesters gathered multiple times at the statehouse in Columbus to oppose Ohio’s shelter-in-place orders. On Saturday, hundreds gathered to protest Ohio’s current county-level mask mandates, saying the requirements are government overreach. To help drive home the importance of wearing a mask, DeWine’s administration is releasing an ad on Tuesday advocating Ohio residents wear masks whenever possible. The message, DeWine said, is that you wear the mask for other people. Getting people to buy in and to understand why wearing a mask is important is key, the governor added.”Getting a 20-year-old to understand that he or she may feel invulnerable, nothing’s going to happen to them — but they may get it, they may not know they have it. They may go home and see their grandmother. She may get it, she may end up dying,” DeWine says. “That’s the message that we’re trying to get out across the state of Ohio.” DeWine also said states need additional funds to help with the public health crisis, particularly money for testing. The Ohio governor’s comments come as the White House tries to block funding for testing and contact tracing in negotiations over the latest relief bill in Congress. Senate Republican, in a rare break with the administration, are pushing back against the White House and trying to keep funding for testing in the bill. “We’re going to continue to need money for testing,” DeWine said, adding that while Ohio has doubled testing over the past five weeks, the state, frankly, needs to “double” that rate.”We can only do that with money coming in from the federal government,” he said. “And it has to be over a long period of time — we’re not going to be out of this in a month, or two months, or three months.”Though the White House is trying to block more money for testing, DeWine said he has confidence in the Trump administration, pointing to the call governors have with Vice President Mike Pence every week.”Anytime I’ve asked— ‘Look, we need something. We need to try to get more reagents. We need to get the FDA moving’ — every single time I’ve asked the president or I’ve asked the vice president, they’ve come through.””What this administration has been able to provide us and that Congress has provided us, and we thank both of them, is the money,” DeWine says.