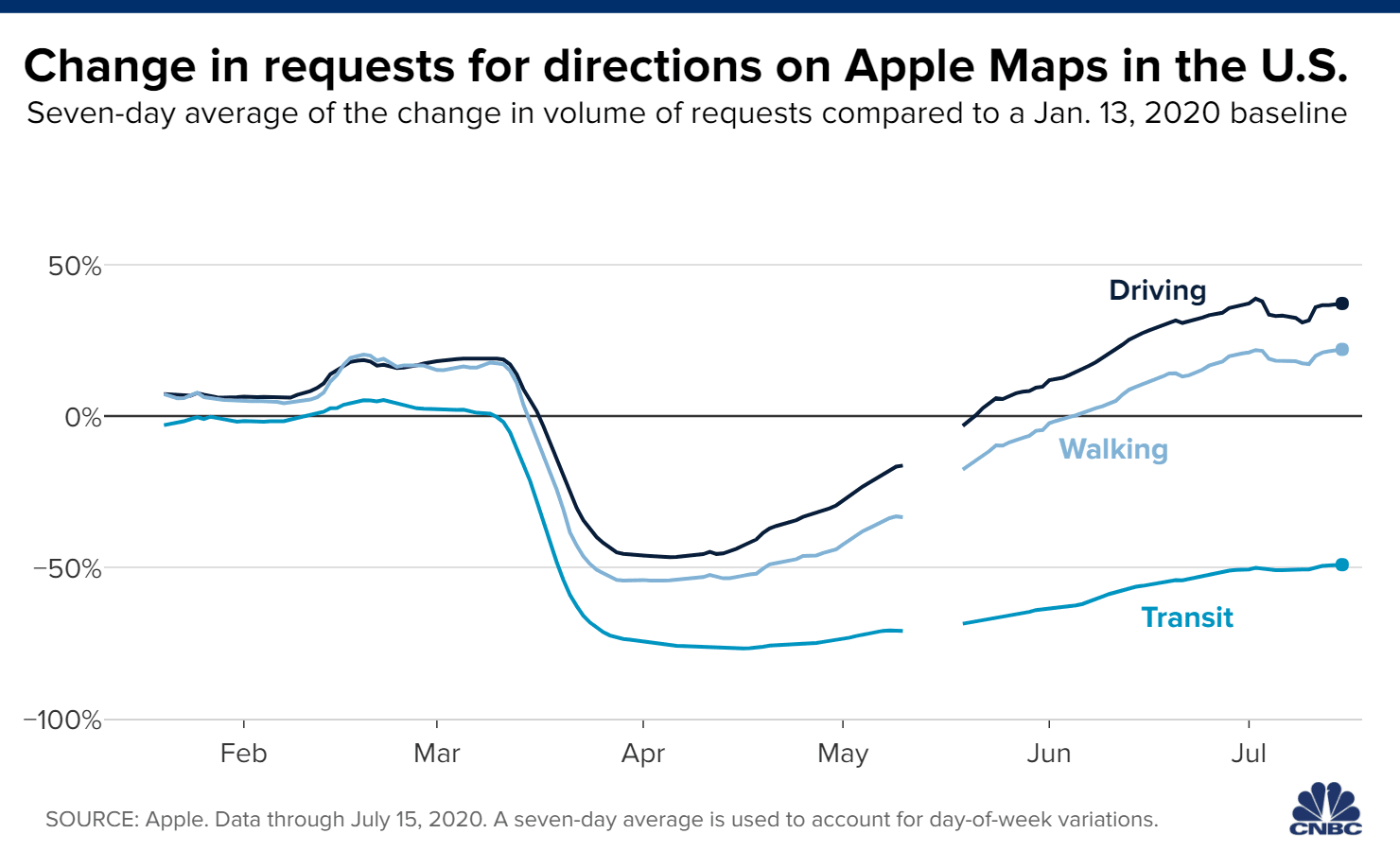 States are taking differing approaches to reopening and closing. States including Colorado and Alabama have instituted mask mandates as Nevada and Michigan are among those who have closed bars to curb the spread of the coronavirus.These five charts illustrate trends in important industries that help track reopening progress in the U.S.Direction requestsData from Apple’s navigation tool, Maps, shows a rebound for walking and driving directions after a dip last week. Compared to last week, walking and driving both increased, bringing them nearly back to the summer high seen in late June. Requests for both are still above pre-pandemic levels, as they have been for most of the pandemic. Transit directions has stayed nearly the same as past weeks at below pre-pandemic levels, but this week saw this slight increase over last week.Restaurant bookingsLike direction requests, new daily numbers from the restaurant booking app OpenTable show a slight rebound from last week’s dip. However, data for recent weeks shows a much less consistent pattern compared to the steady rise in the number of bookings in May and early June, showing the disruption reopening and closing has had on the industry. This week’s numbers, while showing a small improvement of last week, still fall below 60% less bookings compared to last year.Hotel occupancyContinuing the trend seen over the past few weeks, the U.S. hotel booking data provided by the global hospitality research company STR shows no noticeable change since late June. Occupancy remains down at approximately 45% of capacity. U.S. occupancy in July 2019 was at 73.8%. The average daily rate for a hotel room is down nearly 27% compared to 20% last week, according to STR. Norfolk/Virginia Beach, Virginia remained a top travel market, and was still the only major travel market to crack over 60% occupancy. Boston, for another week, and Detroit were both listed among the lowest occupancy levels, with both reporting sub-30% occupancy.Air travelThe number of passengers traveling through airport security checkpoints still sits below 70% of last year, according to data from the Transportation Security Administration, despite an increase over last weeks. The number of people traveling through security checkpoints reached a pandemic-high near the beginning of July, but the spike has tapered off. This week brought new reports of people not following mask mandates for airplane companies, as the airlines have tried to keep safety and financial health at the forefront of their response to the pandemic.Home purchasesThe seasonally adjusted purchase index fell 6% from last week, according to the Mortgage Bankers Association. Despite variance over the course of the pandemic, which may be connected to the economic uncertainty created by the virus, purchase applications are still up 15% over pre-pandemic levels. Mortgage applications also increased 5.1% from one week ago.