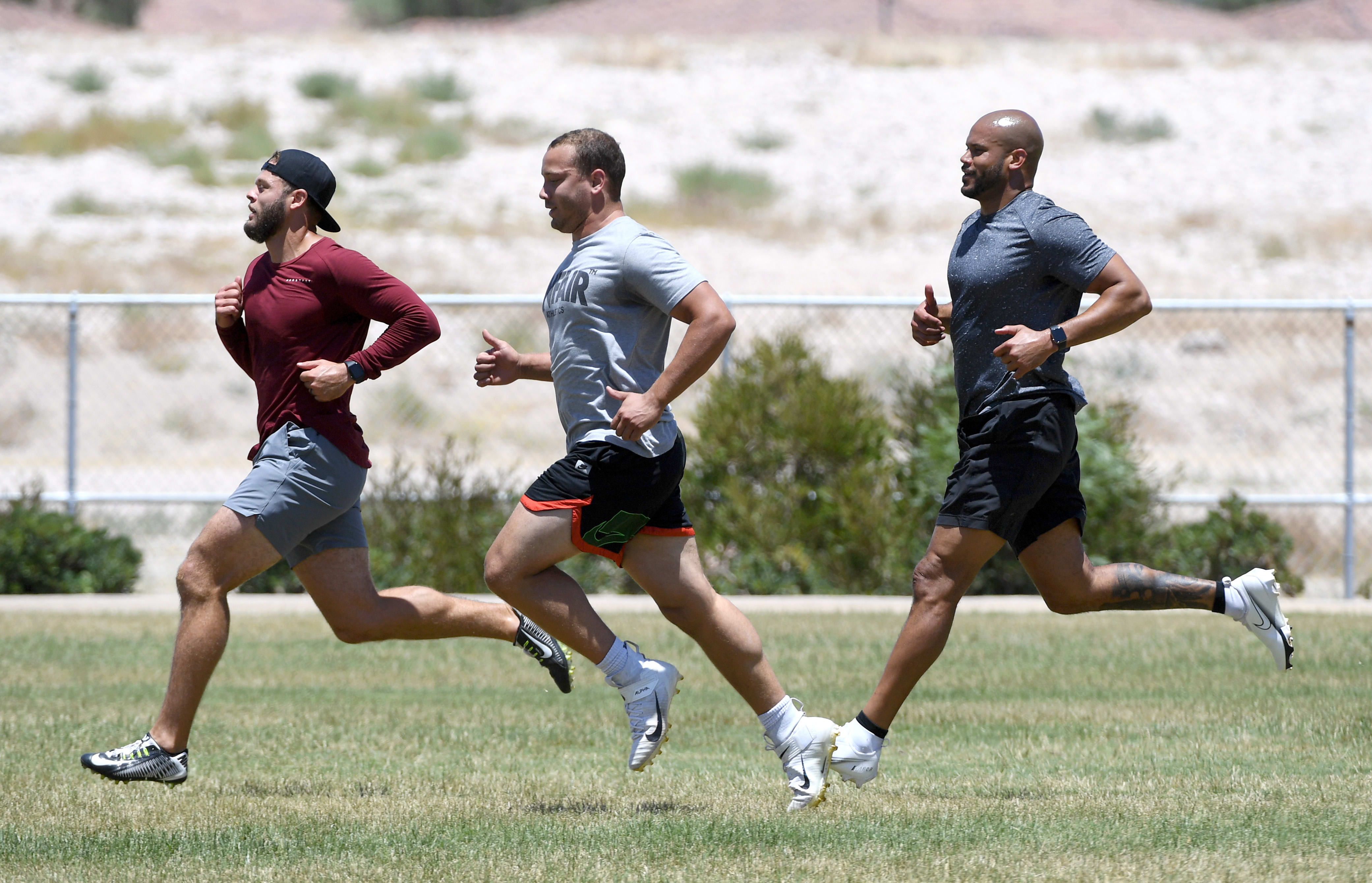 (L-R) Safety Erik Harris, fullback Alec Ingold and linebacker Kyle Wilber of the Las Vegas Raiders work out in a park on June 17, 2020 in Las Vegas, Nevada.Ethan Miller | Getty ImagesThe National Football League’s tug-of-war with its players’ union is on public display, as both parties look to resolve uncertainties related to the coronavirus pandemic.  The sides have agreed to daily testing and the NFL has offered to cancel the 2020 preseason, but the National Football League Players Association (NFLPA) seeks better assurances in negotiations.According to people with knowledge of discussions, the NFLPA wants more clarity on clubs’ disease plans, guaranteed pay for players should training camp and regular-season games stop, and an agreement on future salary cap issues expected to arise due to Covid-19.The people spoke to CNBC on condition of anonymity, as they are not authorized to discuss negotiations publicly.Officials representing club owners have fought the NFLPA on daily testing issues because of the cost, but eventually agreed to terms, as did the NFL with canceling exhibition games.But with government officials in NFL cities already hinting at games with no fans, the league is preparing for a revenue hit of up to $70 million per team.The cap projection was decreased to $40 million per team, according to a report by the league-run NFL.com, but official revenue won’t be totaled until after the upcoming season. But, if accurate, clubs would have less than this year’s roughly $198 million to spend on players in 2021.The union is requesting any cap hit be soothed in throughout the life of the new 10-year collective bargaining agreement, while club owners want the hit factored in immediately.Another issue holding up negotiations is the compensation amount for players who elect to sit out the season. According to sources, clubs would need to offer players some form of payment option for players under contract to avoid potential lawsuits that could arise should the NFL force its players to return. The NFLPA is also seeking $500,000 per player should the league start its regular season then have to cancel games due to Covid-19, according to people familiar with the conversations.Earlier on Wednesday, CNBC reported the players’ union sought full payment of salaries regardless of the number of games played.NFLPA official George Atallah disputed the claims, saying no such request was submitted. “The story is not only false, but has malicious intent,” he said. The NFL declined to comment. Other negotiations ongoingAlthough teams have started to submit their required Infectious Disease Emergency Response (IDER) plans, some have been sent back to clubs for more clarity, according to the individuals who spoke to CNBC.For all 32 clubs to start full training camps by July 28, the NFLPA needs to obtain and approve all IDER plans. If not approved, teams will only be allowed to host up to 20 players in camps.Some NFL clubs have already opened camps for rookie players who are currently being tested for Covid-19. With no agreement, players are still required to attend training camp, but again, in limited numbers.Though issues remain, the people said they expect an agreement as the NFL wants to avoid potential grievances from players.Oakley designed NFL helmet with a face shield to protect players from spreading germs.Source: NFLOn Thursday, the NFL announced fans who attend games in states where it’s permitted would be required to wear a mask. The league starts its regular season on Sept. 10.The NFL also continues to negotiate when players are required to ramp up physical practices in pads. The NFLPA’s concern is the potential for  increased injures, similar to the plethora of injures in 2011 following a brief lockout.Also, the face shields designed by Oakley are losing momentum toward being mandated, which the NFL had wanted. According to the people, the shields were lab-tested by some NFL players, but not tested on the field, which concerns the NFLPA. The shields are designed to replicate regular face masks and protect players around the mouth and nose area to reduce the risk of contamination during play.The NFL says Oakley, which pays the league roughly $75 million per year in partnership rights, will have enough shields to distribute them to all 32 teams before the start of the 2020 season.