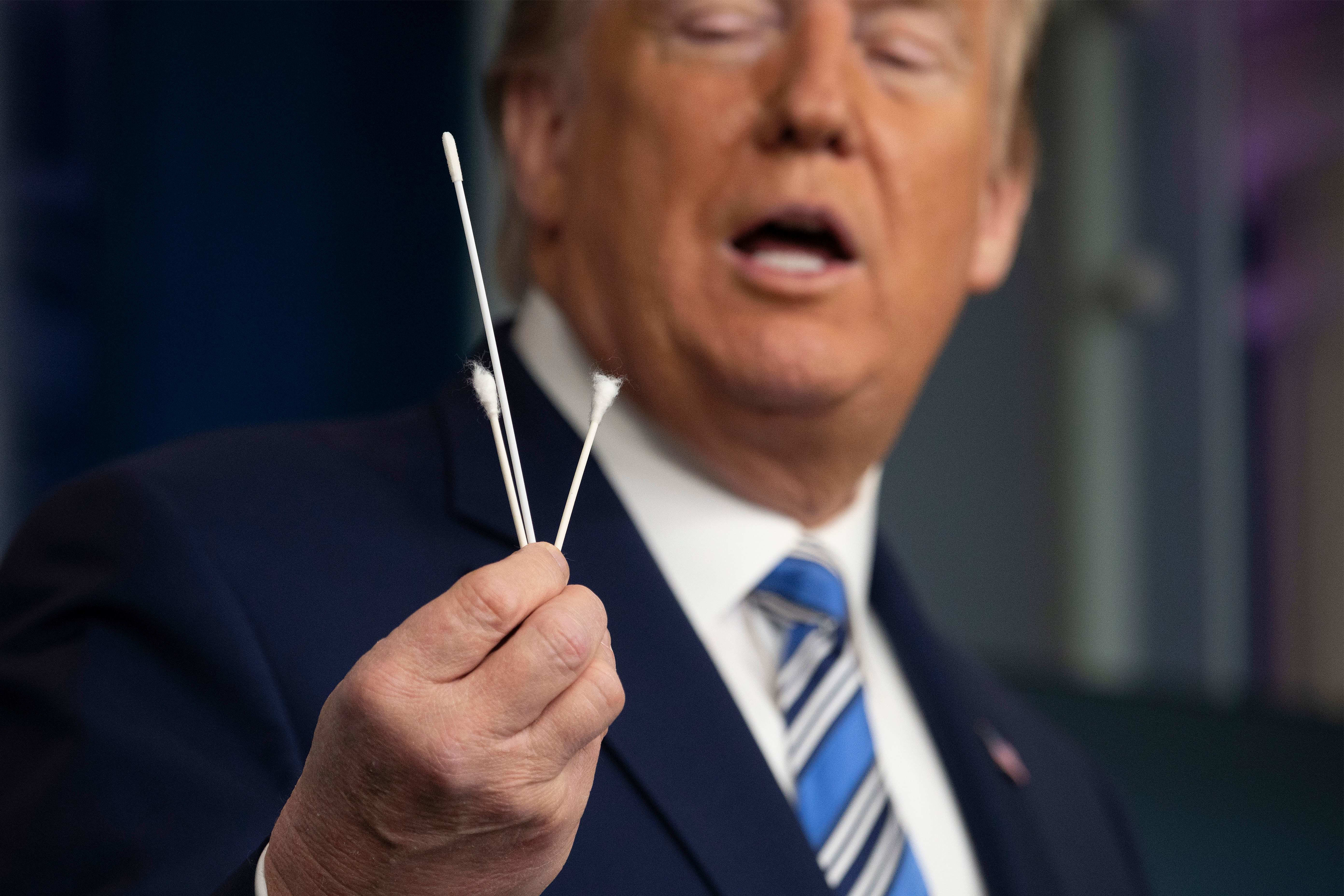 US President Donald Trump holds up swabs as he speaks during a Coronavirus Task Force press briefing at the White House in Washington, DC, on April 19, 2020.Jim Watson | AFP | Getty ImagesThe White House is trying to block billions of dollars for coronavirus testing and contact tracing in the upcoming stimulus relief bill, according to a new report in The Washington Post, even as infections surge across the country and Americans face long wait times to receive test results amid high demand.  The Trump administration also wants to block billions of dollars that would go toward bolstering the Centers for Disease Control and Prevention, the Pentagon and the State Department to combat the pandemic, the Post reported Saturday, citing people familiar with the deliberations.  The White House declined CNBC’s request for comment. Some GOP lawmakers, angered by the administration’s position, are pushing back and trying to keep the $25 billion for testing and tracing in the bill, people involved in the negotiations told the Post. Some White House officials reportedly believe new money shouldn’t be allocated for testing because previous assistance funds remain unspent. While moving to block testing assistance, the Trump administration is trying to use the legislation to fund priorities unrelated to the pandemic such as a new FBI building, according to the Post. The Post report comes just hours after a piece in The New York Times detailed how the White House sought to shift responsibility for dealing with the pandemic to the state governments with disastrous results. The Times’ report was based on interviews with state and administration officials as well as emails and documents. President Trump has publicly called coronavirus testing a “double-edged sword” and even suggested at a campaign rally in Tulsa, Oklahoma that officials should slow testing down. White House officials later said Trump was joking. However, the Times report portrayed a president who feels boxed in by testing because cases counts inevitably increase as more people are tested, jeopardizing the reopening of the economy and potentially damaging his re-election chances. Sen. Majority Leader Mitch McConnell is expected to unveil a coronavirus relief plan this coming week when the Senate returns from its two-week Fourth of July recess. The Republican last week said that “kids in school, jobs and health care are likely to be the focus of the bill.”Leaders in the Democratic-held House and GOP-controlled Senate acknowledged earlier this month that they need to approve more aid to combat the deadly disease’s raid spread while supporting the economy and educating students.The White House deliberations come as the number of confirmed coronavirus cases continues to spike nationally. Dozens of states encountered resurgences after reopening their economies. Only nine U.S. states have the virus under control and just three are on track to contain Covid-19, according to the tracking project Covid Act Now.  On Saturday, the United States reported 71,558 new cases, according to data from Johns Hopkins University, marking the second consecutive day that the country has seen at least 70,000 new cases. Average daily new cases have increased 18.34% nationwide compared to one week ago, according to a CNBC analysis of Johns Hopkins’ data. The coronavirus outbreak has spread worldwide, with more than 14 million confirmed cases and over 597,000 deaths, according to data from Johns Hopkins University. The U.S. has had more than 3.6 million cases and  at least 139,302 deaths, according to the latest tallies, more than any other country. Read the full report from the Washington Post here.– CNBC’s Jacob Pramuk contributed to this report.