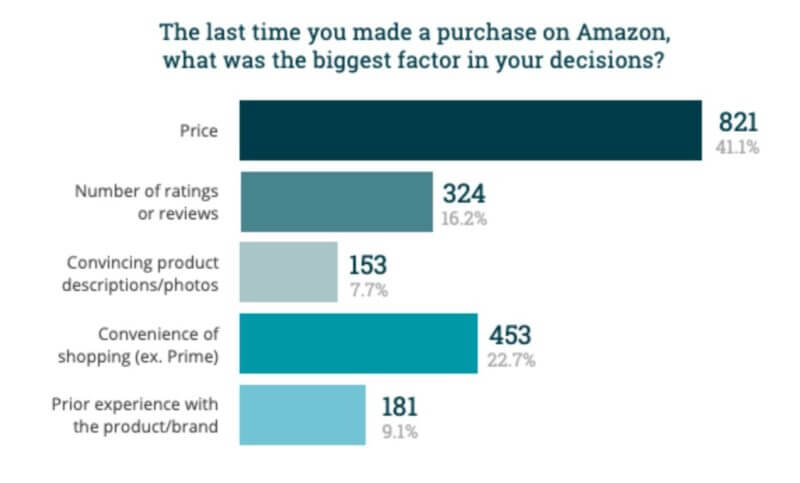 Multiple sources have concluded Amazon has a growing fake-reviews problem. Yet the majority of consumers appear to be unaware of it, according to new consumer survey data from CPC Strategy (part of Elite SEM).

Majority trust Amazon reviews. The survey of 2,001 Americans who’d made at least one purchase on Amazon in the past six months, found that while price was the “biggest factor” in their decision-making, reviews were also a significant consideration. (Nearly 90 percent of consumers read reviews before making a local business purchase-decision.)

Asked about the trustworthiness of reviews on Amazon, 75 percent of respondents indicated they “fully” or “somewhat” trusted them. Just under 21 percent said they only trust verified purchaser reviews and a tiny 4 percent said they don’t trust Amazon reviews “at all.”

The group that said they trusted only verified purchaser reviews is actually down 10 points from the 2018 survey, when it was 30 percent.

Fake reviews problem not subsiding. Multiple third party analyses (Washington Post, ReviewMeta, Fakespot) have concluded that some product categories on Amazon are heavily polluted by tainted reviews (fake or paid-for). Most recently Fakespot said that in product categories such as electronics and beauty, a majority of the reviews are illegitimate in one way or another.

Electronics and computers was the dominant purchase category by far among CPC Strategy survey respondents, followed by beauty and health — the two categories featuring the highest percentages of review fraud according to Fakespot.

Why you should care. Amazon and the FTC have periodically gone after fake reviews and those selling or soliciting them. However those efforts have been ad hoc and not ongoing. Amazon and Google, which also has its own fake reviews problem, have no liability for fake reviews on their platforms and thus limited incentives to systematically crack down.

Given the importance of reviews, there will be continuing incentives on the part of unscrupulous sellers to try and cheat the system, which harms honest merchants. Amazon may also be disinclined to take a much stronger or more public stand against fake reviews because it could call attention to the problem and make consumers more cautious about the site. It will therefore probably be left to the FTC to address the problem with isolated and incomplete enforcement efforts.

Here’s why it is important to have a cohesive mobile customer experience
Freshly CMO Mayur Gupta’s unexpected path from technologist to marketer
To Top
error: Content is protected !!