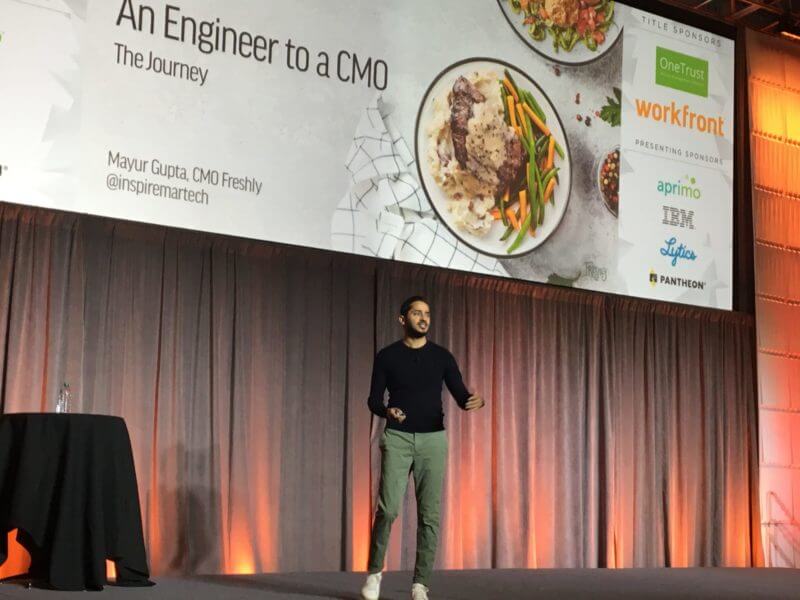 SAN JOSE, CA — Growing up in India, Freshly CMO Mayur Gupta said it was his mother who persuaded him to begin his career as an engineer.

“My mom inspired — or told me — to become an engineer,” said Gupta during his keynote session at this year’s MarTech Conference, “I listened to her and went down that path.” In the early days Gupta said he was like a hammer looking for a nail, just trying to write code as a technologist. Fast forward five years, his whole world change when he became a product lead at Sapient, moving from technology to marketing.

Engineering as a mindset. Gupta says it was an incredible experience for him, moving from technology into product management and eventually into strategy while at Sapien. The fundamental shift in Gupta’s career happened when he left Sapien after twelve years and was named chief marketing technologist for Kimberly Clark.

It was during his time at Kimberly Clark that he began to understand the work wasn’t just about the technology — it was about the outcomes. He began to see engineering as a mindset that could be applied to marketing.

“I wanted to apply that mindset to everything,” said Gupta, explaining that, as a technologist, his job was to simplify every single thing the company did. Once he gained a deeper understanding of how engineering and technology could be applied to every aspect of the business he began looking at data differently.

“How do you apply the data so you make the experience more relevant. More humanistic?” said Gupta.

CTO or CMO? A few years into his role as a chief marketing technologist, he knew he had to decide which career path he was going to take. He had to ask himself if he wanted to continue down the technology path with hopes of becoming a CTO one day, or did he want to go deeper into marketing?

“We’re all victims of marketing every single day,” joked Gupta. He took the marketing path, with the belief that marketers had to stop marketing. He coined the “engineering of marketing” ideology because, for him, traditional marketing didn’t make sense — what did make sense was applying what he knew about engineering to his marketing role.

“What I did know as an engineer was how to stitch it all together,” said Gupta. He says marketers must understand that your customers are your brand. That marketers need to sync the customer experience to deliver what consumers need before they know they need it.

“A mom waiting to buy her next package of diapers isn’t waiting for the next marketing campaign,” said Gupta. Marketers have to let go of thinking in terms of campaigns and channels because at the end of the day it is about outcomes and applying agile principles to the work.

Shaking up the marketing rules. For Gupta, marketing needs to focus on speed over perfection. He said that growing a brand is directly connected to the brand’s user value and user base. He doesn’t believe everything in marketing has to be measurable.

“While there is so much emphasis on data, we don’t have to be too data-driven.”

What’s clear listening to Gupta talk about technology, marketing and his career, is how much he attaches what he does for brands with his own value system. His focus during the last three years has been on science as it relates to our culture.

“Learning the art of science and culture, learning to respect your belief system — because that’s what drives your culture.”

What will happen to influencer marketing if Instagram ‘Likes’ go away?

Screening the screenless: Marketing’s next frontier