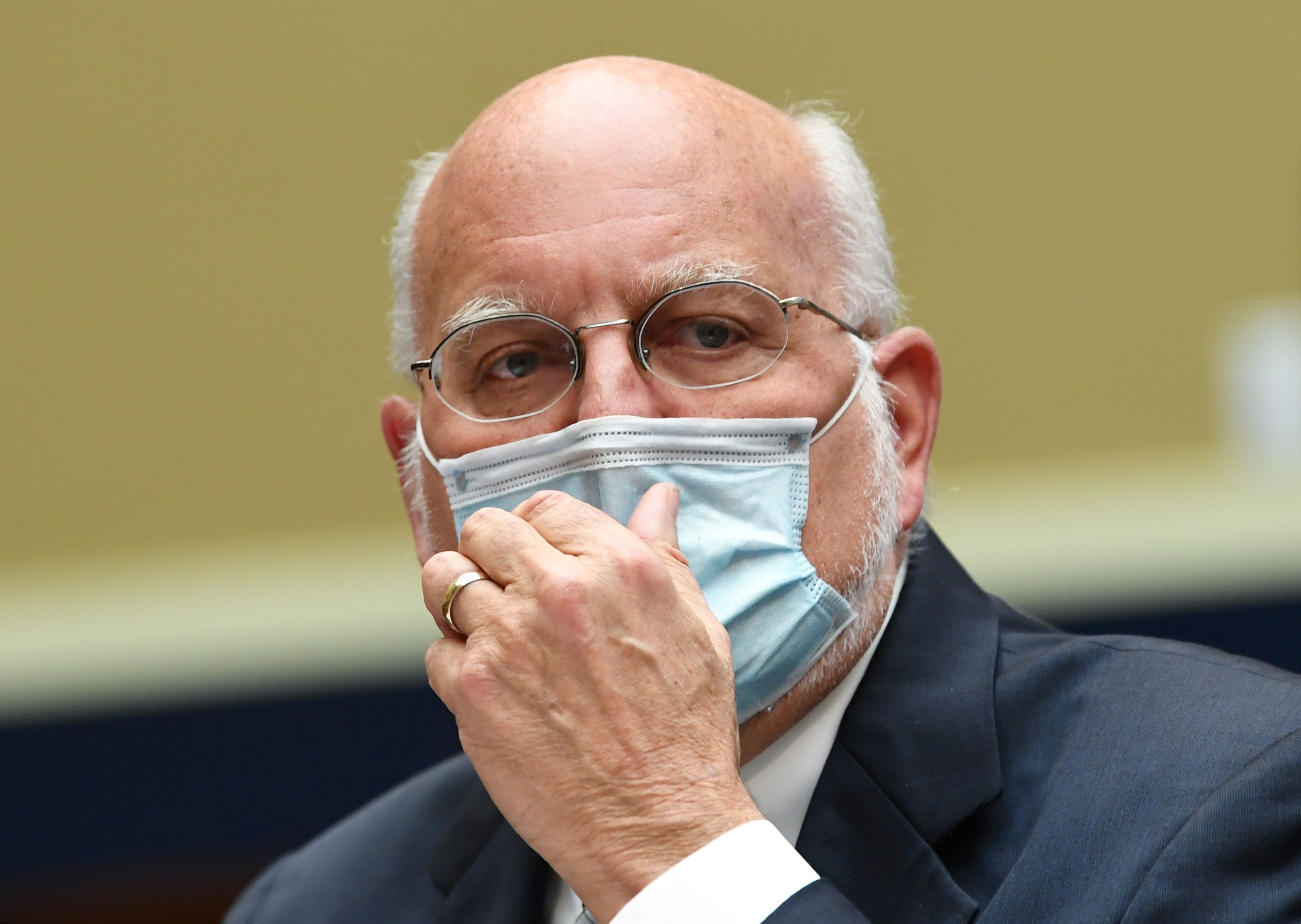 Director of the Centers for Disease Control and Prevention Dr. Robert Redfield wears a face mask while he waits to testify before the House Committee on Energy and Commerce on the Trump Administration’s Response to the COVID-19 Pandemic, on Capitol Hill in Washington, DC, U.S. June 23, 2020.Kevin Dietsch | ReutersThe Centers for Disease Control and Prevention said policymakers should consider requiring face coverings to reduce the spread of the coronavirus after studying two Missouri hair stylists who had Covid-19 but didn’t pass it on to their clients, the agency said in a new study published Tuesday. “With the potential for presymptomatic and asymptomatic transmission, widespread adoption of policies requiring face coverings in public settings should be considered to reduce the impact and magnitude of additional waves of COVID-19,” the study published by the CDC says.Some governors, including California Gov. Gavin Newsom and Texas Gov. Greg Abbott, have issued requirements to wear face coverings in public or in certain environments when people are unable to practice social distancing. However, there’s no U.S. nationwide mandate like in China and other countries. Not all states in the U.S. have issued mask mandates and some with surging outbreaks, including Florida, have left it up to local cities and counties. That’s left U.S. businesses to enforce face covering requirements on their own, as CNBC previously reported. In an interview with the Journal of the American Medical Association’s Dr. Howard Bauchner later Tuesday, Redfield stressed the importance of masks. He said the U.S. could get the coronavirus pandemic under control in one to two months if every American wore a mask.”I think we’re being very clear now,” Redfield said. “Now’s the time to wear a mask.”The CDC tracked two infected hair stylists in Springfield, Missouri, who worked while they were contagious, but it appears they didn’t transmit the virus to any of their 139 clients. One of the stylists developed symptoms on May 12, the researchers said, and continued to work until May 20, when they received a positive Covid-19 test result. In that time, the infected person passed the virus onto another stylist who also continued to work until May 20, despite developing symptoms on May 15, the researchers wrote.The two stylists worked on 139 clients in the eight-day period, the researchers wrote, but after follow-up testing and interviewing, none of them tested positive for Covid-19 or reported having any respiratory symptoms. The researchers concluded that the citywide ordinance that both limited the business to 25% capacity and required everyone in the salon to wear masks helped to prevent the spread of the virus.”A policy mandating the use of face coverings was likely a contributing factor in preventing transmission of SARS-CoV-2 during the close-contact interactions between stylists and clients in salon A,” the researchers wrote. “Broader implementation of masking policies could mitigate the spread of infection in the general population.”The two stylists always wore either a “double-layered cotton face covering” or a surgical mask when interacting with clients, the researchers said. They added that clients reported wearing either a cloth face covering, a surgical mask or an N95 respirator for all or part of the time they were in the business.The absence of transmission at the hair salon builds upon mounting evidence that shows the use of masks and face coverings, particularly in indoor or crowded environments, play an important role in preventing infection. The researchers cited observational data from 194 countries showing that “countries that did not recommend face masks and respirators” reported a greater increase of Covid-19 deaths per capita than “those countries with masking policies.”However, the researchers noted some limitations of their study of the Missouri hair salon. Not all clients agreed to be tested and some may have been tested too early in the virus’ incubation period to turn up a positive test, despite potentially testing positive later, the researchers said.Overall, 67 clients agreed to be tested and 72 refused, the researchers wrote, but of the 139 total clients, 104 were interviewed by the Greene County Health Department about whether they had developed symptoms. Some 87 of the 104 reached said they did not develop symptoms, and of those who did report symptoms, none received Covid-19 testing.That means it’s possible asymptomatic or mildly symptomatic people who could have been infected at the salon went undetected. And it’s possible that the stylist could have infected clients before they began to exhibit symptoms, but the researchers did not collect data from clients who visited the salon before the first stylist developed symptoms. The researchers also noted that the nature of hair services, in which the client is faced away from the stylist, could have reduced the risk of infection instead of the masks. Despite these limitations, the researchers said the study supports widespread use of face coverings and masks to reduce Covid-19 transmission. Face coverings have become a political lightning rod in the debate over how best to control the pandemic, but scientists say there is evidence they help contain the outbreak. They say it’s especially important to keep people who either have no symptoms or whose symptoms haven’t started yet from spreading it. “These results support the use of face coverings in places open to the public, especially when social distancing is not possible, to reduce spread of SARS-CoV-2,” they wrote.