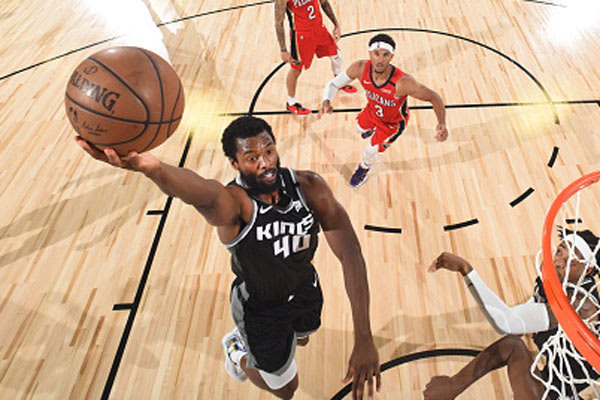 Harrison Barnes #40 of the Sacramento Kings drives to the basket during the game against the New Orleans Pelicans on August 6, 2020 at The HP Field House at ESPN Wide World Of Sports Complex in Orlando, Florida.Joe Murphy | National Basketball Association | Getty ImagesWith his season over and some time to reflect before starting a new campaign, National Basketball Association forward Harrison Barnes plans to enhance his banking knowledge.Barnes, who plays for the Sacramento Kings, became a shareholder and was named to the board of directors of Iowa-based First National Bank in August. In an interview with CNBC, Barnes said he wants to use his new position to learn the industry, assist small businesses who depend on community banks, and increase financial awareness.  “Me and my family have been banking there for two decades,” Barnes said, who grew up in Ames, Iowa. He added banking is “very conservatively run” with confident management teams, “but it’s also the ability for me to able to promote financial literacy for young people.”Coming off an eight-game performance in the NBA’s Disney bubble in Orlando, Barnes averaged 13.1 points and 6.1 rebounds in the contests, but the Kings fell short of reaching the postseason.Now that Barnes is free from playing competitive basketball until at least the end of December, he reflected on the past six months, in which he tested positive for Covid-19, contributed to social justice initiatives, and witnessed racial barriers continue to plague the nation.Pushing forwardThe death of George Floyd on May 25th at the hands of Minneapolis police officers sparked mass protests against racism around the world, raising awareness about about the unequal treatment Black people face by the health, economic and law enforcement systems. The protests have brought attention to cases that otherwise would have gone overlooked, such as the deaths of Breonna Taylor and Rayshard Brooks at the hands of police in Louisville and Atlanta. Barnes and his wife Brittany, for their part, were engaged in supporting the victims of police brutality before the recent wave of social unrest. In October 2019, the couple paid for the funeral of Atatiana Jefferson, who was shot and killed by a Fort Worth police officer. Barnes, in a campaign “to carry on the legacy of Atatiana Jefferson,” donated a total of $200,000 to organizations that support the victims of police brutality, or $25,000 for every game the Kings played in the NBA Disney bubble. He said social justice movements need to “push forward.””From a larger perspective, we just can’t stop,” Barnes said. “We can’t stop making our voices heard, we can’t stop demanding for change, and we have to continue to push forward to break down these barriers,” said Barnes.The former University of North Carolina protege didn’t forget about the battle with the pandemic, either.In April, Barnes donated $40,000 to “fund weekly groceries for vulnerable families and seniors” adversely impacted by Covid-19. But his financial assistance didn’t make him immune to Covid-19.In July, Barnes tested positive for coronavirus and watched his wife suffer through “full blown symptoms.” Barnes said his empathy was affected throughout the experience.”I’ve grown in maturity because I understood from an intellectual standpoint how serious Covid-19 is and all the effects it was having on our society,” Barnes said.”Covid-19 is still present,” he added. “It’s still active and serious, so people need to take caution and preventive care against it. But in general, in society, I think we can be more empathetic.”Robert Covington #33 of the Houston Rockets drives around Harrison Barnes #40 of the Sacramento Kings during the first half at HP Field House at ESPN Wide World Of Sports Complex on August 9, 2020 in Lake Buena Vista, Florida.Ashley Landis | Pool | Getty ImagesHelping the ‘lifeblood’Small businesses have taken a massive hit due to the pandemic, and black business owners have suffered the most.Forty-one percent of the 1.1 million Black-owned businesses on Main Street shut down between February and April as the coronavirus pandemic swept the country. That’s twice the failure rate of nonminority businesses, according to a study by the Federal Reserve Bank of New York. Barnes said most local businesses need funding from community banks, calling the institutions the “lifeblood” for smaller firms. Barnes said he would “learn from the inside the key attributes of a successful bank” and wants to develop more banking relationships to help support and create new businesses.He said he would use First National Bank as “another platform to give back because that’s important for my wife and I.”Now that he’s removed from the bubble, Barnes was asked his thoughts on the remaining teams. He picked the Los Angeles Lakers to win the Western Conference.”I like the way Miami has been playing,” Barnes said of the opposing conference. “I think they come out of the East.”On the Kings front, team owner Vivek Ranadive hired a new general manager on Thursday after the team parted ways with former GM Vlade Divac in August. Barnes said he hopes to see a renewed “vision” for the Kings after Divac established a playoff-contending roster.His agent, Jeff Schwartz of Excel Sports Management, negotiated a four-year, $85 million extension with the Kings last July. The deal locks Barnes into a contract with team until 2023.”Vlade did a great job assembling talent, but part of the business is you get judged on wins and losses,” said Barnes. “He wasn’t able to see that vision through. If they [new front office] have a vision for us, we win.”