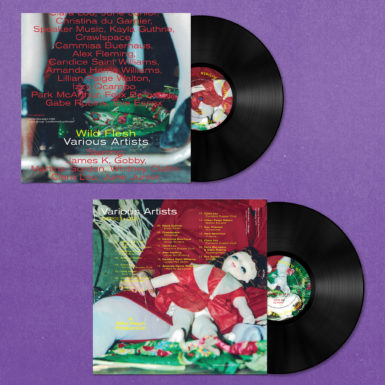 “It’s a compilation of music made primarily by non-musicians,” Cammisa Buerhaus said of Various Artists, a new release on her record label Wild Flesh Productions to be feted on Thursday night with a concert at Montez Press in Chinatown in New York. The genesis of the project traces back to a spell of curiosity, when Buerhaus wanted to hear how visual artists could translate their practice into sound. With that in mind, she reached out to potential participants and kept the parameters wide. “I said it could be anything,” Buerhaus recalled. “It could be a recording of your voice. You could use your iPhone to record.”

A few artists she asked admitted to being “afraid of sound,” but many accepted the premise, and the result is an album that plays like a tightly wound abstract mixtape, heavy on spoken word and experimental production techniques—a bit like listening to a zine. “People really tried. They cared when they were making the work—I think that comes across,” Buerhaus said.

The record features 21 tracks with song-lengths ranging from 37 seconds to five minutes. Figures connected to underground music communities (James K, Gobby, Kayla Guthrie) share space with visual artists like Whitney Claflin, Clara Lou, and the curator Alex Flemming. Reactions to the record vary. One friend of Buerhaus’s told her that “one track is amateurish but everything else is very well done”; another friend “identified that [same] track as the most polished and professional.” Overall, she said, “The sounds are quite disparate, but I wanted it to have a certain flow.”

Wild Flesh Productions was created as a label last year with a goal of focusing on music made by artists. Various Artists is the label’s second release, after an EP last summer by Kayla Guthrie. For her part, Buerhaus has a history moving between music, contemporary art, and performance worlds in New York, with acting credits in theater works by Richard Maxwell and a play of her own, The Maze, presented last year at Spirit Shop in Lisbon, Portugal.

Running across Various Artists is a desire to shine a spotlight on artists whose work falls outside of more mainstream channels. “Most people who I asked are working on the margins,” Buerhaus said. “This record was was about working with people whose practices I thought were interesting.”