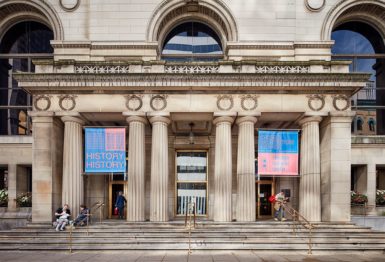 The Chicago Architecture Biennial in 2018.

The list of contributors to the Chicago Architecture Biennial’s 2019 edition, which will run from September 19 through January 5, 2020, has been announced, and it features more than 80 people and groups from over 20 countries.

This year’s biennial is titled “…and other such stories,” and its participants are asked to create projects that relate to “land, memory, rights, and civic participation,” according to a release.

Several contributors are partnering with communities in Chicago, such as Johannesburg’s Keleketla! Library, which will team up with Chicago-based Stockyard Institute, and Berlin’s Akinbode Akinbiyi, which will participate in a residency at the School of the Art Institute of Chicago at Homan Square.

Yesomi Umolu, the biennial’s artistic director, said in the same release, “Our 2019 contributors represent the diversity of thinking on architecture and spatial practice globally, each engaged in research and work that explores the potential and challenges of our everyday experiences across public and private space, as well as the motivation and potential for the future of the field.”

The contributors were selected by the biennial’s curatorial team, which is composed of Umolu, Sepake Angiama, and Paulo Tavares. The full list follows below.