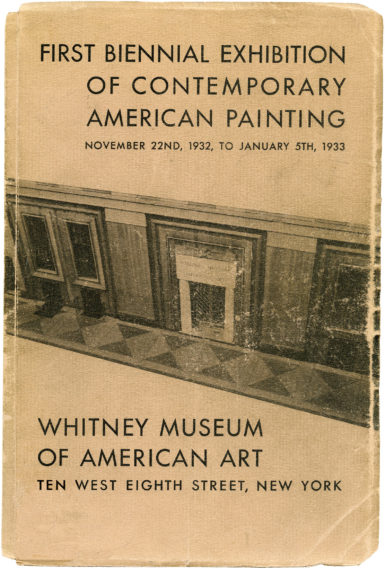 The catalogue for the first Whitney Biennial.

As museums make more information available online—with images of artworks and PDFs of out-of-print publications easier than ever to see—the Whitney Museum in New York has set up a digital platform for the Whitney Biennial. The website includes artist lists for past editions as well as catalogues for some of the exhibitions dating back nearly 90 years.

The Whitney Biennial began in 1932, when the show was split into two exhibitions—one for painting, the other for mediums including sculpture, watercolors, prints, and drawings. In 1937 the exhibition shifted to an annual timeline instead of every two years, and then it changed back in 1973.

The new site is a treasure trove for art history fans. Did you know, for example, that the 1941 Painting Annual was devoted specifically to artists younger than 40? (Among those in that exhibition were Paul Cadmus, Adolph Gottlieb, Arshile Gorky, and Andrew Wyeth.) Did you know that the catalogue for the 2002 Whitney Biennial included a CD on its cover featuring music and sound works?

All of that and more can be found on the site, which helps set the stage for the next Biennial, curated by Rujeko Hockley and Jane Panetta, opening in May.