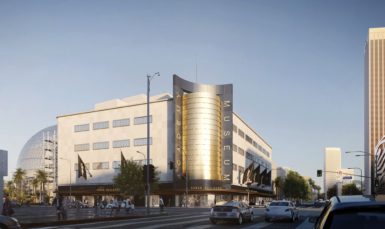 Rendering of the Academy Museum of Motion Pictures.

The Academy Museum of Motion Pictures in Los Angeles has appointed Amy Homma, who previously served as acting deputy director of the arts and industries building at the Smithsonian in Washington, D.C., as its first-ever director of education and public engagement. The institution is set to open later this year.

Homma has also previously served as director of digital learning at the Hirshhorn Museum and Sculpture Garden in Washington, D.C. In her new role, she will oversee the museum’s educational programming and public programs—including lectures, panels, symposia, and gallery talks—and develop ties with local schools. One of the museum’s major education initiatives will be its filmmaking program for teens, held in its Shirley Temple Education Studio.

Alongside news of Homma’s appointment came an announcement that the Academy Museum of Motion Pictures will use a grant from the George Lucas Family Foundation to underwrite free admission for visitors ages 17 and younger. Notably, the Lucas Museum of Narrative Art is currently being constructed in South L.A.

Homma said in a statement, “Movies, and the magic that surrounds them, offer limitless opportunities to delight, challenge, and educate both children and adults. The Academy Museum’s programming will offer something for everyone. I am delighted to be joining the team and especially grateful to the George Lucas Family Foundation for ensuring a barrier-free experience for our next generation of movie makers and movie lovers.”