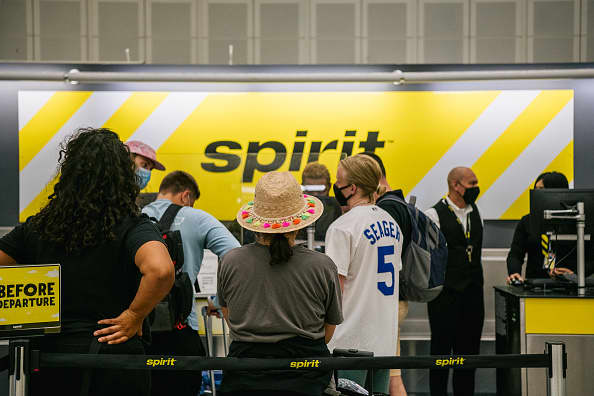 People wait in line at a Spirit Airlines counter, at the George Bush Intercontinental Airport, on Aug. 5, 2021 in Houston, Texas.Brandon Bell | Getty ImagesThe causes of Spirit Airlines’ massive flight cancellations that derailed the summer vacations of tens of thousands of customers this week have been brewing for more than a month, CEO Ted Christie said.A combination of flight delays throughout July, staffing shortages, technology problems and a surge in travel that has taken most airline executives by surprise, culminated with more than 1,700 flights canceled since Sunday, some days accounting more than half of Spirit’s schedule.And trouble isn’t over for travelers. Christie said the carrier needs to cancel additional flights over the next several days to regain its footing.”There’s definitely some angry people,” he told reporters on Thursday night. “Right now, all I can say is we’re very sorry for what happened.”The chaos enraged stranded customers at airports and sparked furious messages online, presenting Christie with one his biggest tests since he became CEO on New Year’s Day 2019.”This is a gut-punch to everyone,” Christie said.Chronic delays throughout July snowballed, leading to staffing shortages as crews timed out, reaching the maximum time they could legally work each day, he said. It became dramatically worse over the weekend and in the days that followed.”We couldn’t get in front of it,” Christie said. He estimated that “tens or hundreds of thousands” of customers were affected by Spirit’s disruptions and said it is too early to estimate financial impact to the company.On Thursday alone, 446 Spirit flights were canceled, 56% of its operation.A sharp rebound in summer travel has created headaches for summer travelers as airlines and their contractors faced staffing shortages coupled with the usual disruptive summer storms.Miramar, Florida-based Spirit has improved its reliability in recent years and in 2017, it turned to Walt Disney’s leadership and professional training subsidiary, the Disney Institute, to help improve customer service.”We are going to do everything we can to earn back the confidence of our guests and the traveling public. We believe we can do that,” Christie said on the call Thursday. He said the airline is giving customers affected cash refunds.In hindsight, Spirit should have canceled more flights earlier to give it time to recalibrate, Christie said. Instead the airline tried to maintain flights to cater to large numbers of customers, many of them flying for the first time since the pandemic began.The airline last month forecast it would fly almost 11% more in the third quarter compared with the same period of 2019, a much bigger rebound than most airlines.Christie said he and other executives are examining how to add more backup staffing, faster responses to operational hiccups and better technology.”We’re beginning to turn the corner and get our legs under us where we can start to build back to where we were before,” Christie said.Correction: This story has been updated to correct a headline.