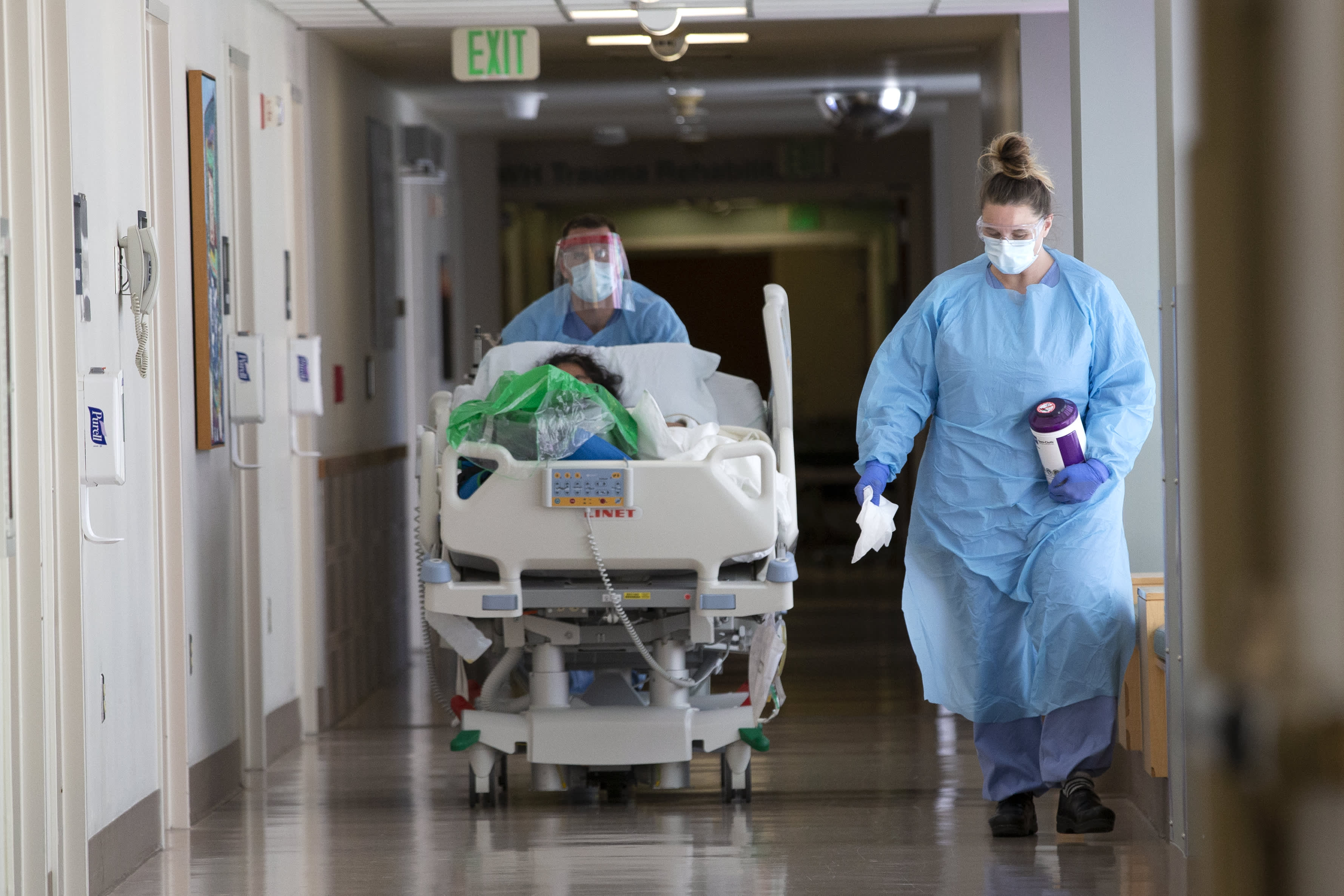 A nurse on infection control accompanies a patient being transferred from the ICU COVID unit to the acute care COVID unit at Harborview Medical Center on May 7, 2020 in Seattle, Washington.Karen Ducey | Getty ImagesThe Covid outbreak is so bad in Washington state that hospitals are running out of intensive care beds as the delta variant drives cases near record highs, state health officials said Wednesday.At least one woman died while waiting for an ICU bed, said Dr. Steve Mitchell, medical director of the emergency department at the Harborview Medical Center in Seattle.”This patient who was severely ill and unfortunately she actually did pass away in this small hospital when after eight hours of trying, we were unable to find an ICU bed that could help sustain her life at that point,” Mitchell said at a press conference with state health officials.Another patient had to wait six hours for a lifesaving surgery, and one patient had to be transferred to a hospital in Idaho that had a bed available, he said.”Sadly for large periods of time now, we have reached a point where there are actually no critical care beds that are able to accept those patients throughout our entire state,” he said. Hospitals are short on all levels of staff, from janitors to clinical staff, he added.Cases are approaching all-time highs set in December, currently averaging about 3,200 cases per day over the last week, according to a CNBC analysis of data compiled by Johns Hopkins University. Covid hospitalizations, however, have hit an all-time high at 1,460 Covid patients, officials said. In just the past month, 1,100 new Covid patients were hospitalized, and the number is doubling every 18 or 19 days, state officials said.All hospitals in the state are “stressed, stretched and strained,” said Washington’s secretary of health, Dr. Umair Shah. Hospitalizations usually surge a week or two after a surge in cases, but Covid deaths in the state have remained relatively stable.The highly transmissible delta variant now makes up 96% of cases in the state and has driven case counts to levels that are “as high as they’ve ever been in the state of Washington,” according to Dr. Scott Lindquist, the state’s acting chief science officer.An overwhelming majority, 95%, of Covid hospitalizations in the state from Feb. 1 to Aug. 3 were people who were not fully vaccinated.Vaccinations across the state have jumped by 21% over the last week and 34% in the past two weeks as the delta variant dominates headlines, officials said.”We are seeing an uptick in vaccinations among all age groups,” said Michele Roberts, acting assistant secretary of the state’s department of health.Most of the increase in vaccination is among older adults as parents worry about the delta variant spreading to kids as they return to school. About 48% of 12- to 15-year-olds in Washington have initiated vaccination, and 54% of 16- to 17-year-olds have initiated vaccination.”That’s about half of the kids who are eligible in our state … we would love to see those numbers climb, especially with school getting started,” Roberts said.Washington ranks eighth among all states when it comes to how much of the population is fully vaccinated with two doses, about 59.5%, according to Centers for Disease Control and Prevention data as of Aug. 24.The state has currently vaccinated 71.5% of its population ages 12 and older with at least one dose, according to the state’s department of health, but some counties in the state are still lagging behind.”If we had 70% across the entirety of the state, every neighborhood, every county, every region, we would be in a different place,” Shah said.Some counties have vaccination rates that are well over 90% and other places linger in the 30% range “and that is what concerns all of us,” Shah said.”Unfortunately, if we do not get people vaccinated, and people aren’t doing the things they can do to help, then guess what, we are going to continue in this situation,” Shah said. “And I know the majority of Washingtonians do not want that.”