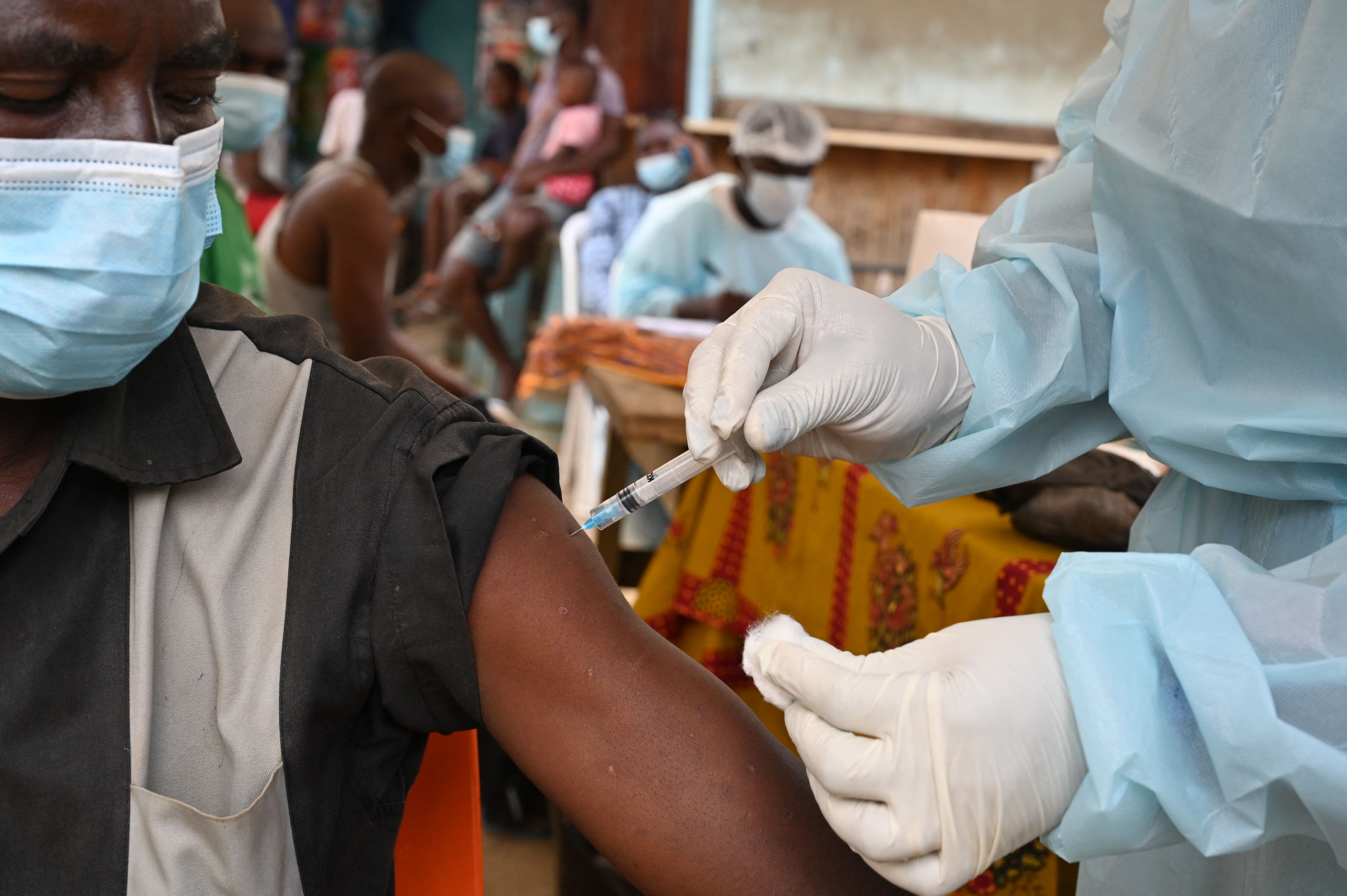 A health worker vaccinates a man in Abidjan on August 17, 2021 during a roll-out of vaccinations against Ebola on August 17, 2021, after the country recorded its first known case of the disease since 1994. (Photo by Issouf SANOGO / AFP) (Photo by ISSOUF SANOGO/AFP via Getty Images)ISSOUF SANOGO | AFP | Getty ImagesAfrican countries have been “shortchanged” with regard to its access to Covid-19 vaccines, the president of African Development Bank said.”Africa [has] for sure been shortchanged, if I can use that term, regarding access to vaccines globally,” Akinwumi Adesina told CNBC’s “Squawk Box Asia” on Tuesday.”The vaccines are not getting here in time, in the right quantity and the right price,” he said, adding that saving lives is “all about timing.”Only 2.48% of the continent has been fully vaccinated as of Aug. 23, according to Our World in Data, far behind other continents.In comparison, vaccination rates stand at 25.31% in Asia and 27.1% in South America, while Europe and North America’s inoculation rates are both above 40%, statistics in Our World in Data showed.”If there’s any lesson … that we have learned from this, it is that Africa should not depend on the rest of the world for supplying it with critical vaccines, and also therapeutics,” he said.I expect Africa will rebound after this particular pandemic. The fundamentals remain very strong.Akinwumi Adesinapresident, African Development BankAfrica “should not be dependent on others, it should be self-sufficient,” he said.To that end, the African Development Bank wants to invest in primary, secondary and tertiary health-care infrastructure, Adesina said. It also hopes to put $3 billion toward the pharmaceutical sector so that Africa can have vaccines and medicine for itself.Economic effectThe pandemic has had a “very dramatic impact” on Africa, Adesina said, adding that GDP growth fell, fiscal deficits doubled and debt-to-GDP ratios increased in 2020.But he said he expects growth to hit 3.4% this year, after contracting 2.1% in 2020.”Africa still has fantastic fundamentals,” he said, pointing to rapid urbanization, good potential for consumer spending, and a large, young population.The African Continental Free Trade Area is also “too big to ignore,” the bank president said.According to the World Bank, the AFCFTA as it’s called, is the largest free trade area in the world measured by the number of countries participating. It seeks to connect over a billion people in 55 countries that have a combined GDP of $2.5 trillion.”I expect Africa will rebound after this particular pandemic,” he said. “The fundamentals remain very strong.”

White House Covid officials up the pressure on private employers to mandate vaccines: ‘Now is the time’
Washington state officials say they’re short on hospital staff and running out of ICU beds as Covid resurges
To Top
error: Content is protected !!