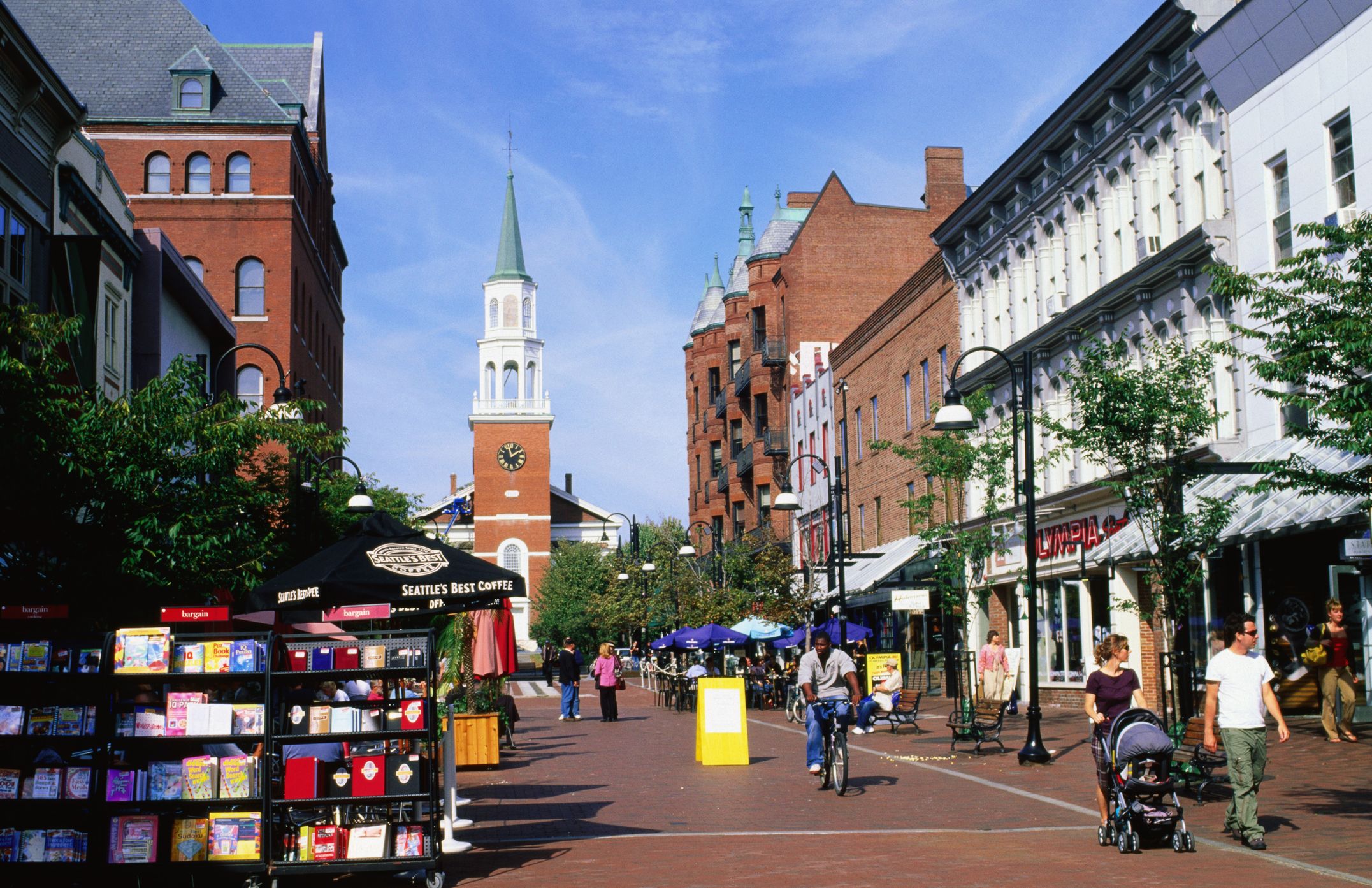 Vermont was one of the first to get the ball rolling last year with its Remote Worker Grant Program, offering individuals up to $10,000 over two years to move to the Green Mountain State.

More than half of U.S. counties are now shrinking, thanks to low birth rates, aging baby boomers and skilled people moving to better job markets.

For example, Vermont lost about 4% of its adult population with a bachelor’s degree or higher to other states in 2017, according to the U.S. Census Bureau, while only about half that amount moved in. Without the right talent, entrepreneurship can’t flourish. Other states are dealing with severe shortages due to near-record low unemployment. The jobless rate in Nebraska was just 3% in May, well below the national average.

To bolster the talent base and potentially reverse these troubling population trends, Vermont and Nebraska — along with Oklahoma, Maryland, Connecticut, Michigan, Kansas and others — are offering money and other incentives to get people to move there. The result: a boom in the remote work movement.

He added that when remote workers take advantage of these incentive programs, there’s a multiplier effect because they often come with a spouse and other family members. That brings in additional sales tax and other economic spending that helps fortify the local economy, he said.

The models being followed by companies like Amazon and Foxconn — which are building more large campuses — are broken. The model for the 21st century is to focus instead on retaining and attracting desirable workers by encouraging remote work opportunities.

Stephane Kasriel, Upwork’s CEO, blames the huge imbalance in the geography of opportunity. He believes that in order to combat population decline and depressed economies, companies need to stop requiring work to be done onsite when it can be done remotely.

“The models being followed by companies like Amazon and Foxconn — which are building more large campuses — are broken. The model for the 21st century is to focus instead on retaining and attracting desirable workers by encouraging remote work opportunities, ” he said.

Here are some of the cities and states offering incentives.

One of the first to get the ball rolling last year with its Remote Worker Grant Program, Vermont offers individuals up to $10,000 over two years to move to the Green Mountain State. To be eligible, an applicant must be employed full-time by a business outside of Vermont. The money covers moving expenses, co-working space fees and more.

Joan Goldstein, commissioner of Vermont’s Department of Economic Development, says that when Gov. Phil Scott came into office in early 2017, one of his major goals was to change the demographic story of the state. “Up until that point, economic development had always been about convincing businesses to come or expand,” she says, adding that the remote-worker program was about marketing directly to individuals “to bolster the population and workforce levels here first.”

Tulsa is hoping that’s the case. Population growth in this metro area has been slowing, with the year ending in June 2018 recorded as the slowest period of growth in the decade, according to the latest figures from the Census Bureau. The state is particularly hurting for educated workers. Fewer than 25% of adults have a bachelor’s degree or higher, one of the lowest educational attainment rates in the country.

In November the community launched Tulsa Remote, a program that offers $10,000 to applicants who move to and work remotely from Tulsa. The initiative is a joint effort between the city and the George Kaiser Family Foundation (GKFF), an organization that works to tackle the most pressing problems in the Tulsa community.

Aaron Bolzle, executive director of the program, says Tulsa has spent the past decade making improvements to its downtown area and wanted a way to get the word out to more people. Tulsa Remote offers $2,500 for relocation expenses, a $500-per-month stipend for a year and a $1,500 balloon payment at the end of the first year. To sweeten things even further, remote workers moving to Tulsa get discounts on rent and utilities for three months in newly built apartments in the Tulsa Arts district and a year’s free membership at 36 Degrees North, a local co-working space.

In the 10 weeks after the program was announced, Bolzle says the city received 10,000 applications. Eventually 100 people representing 26 states were selected, with all the funding coming from GKFF. The goal is to attract more young talent to the city and show them that it’s a good place to stay and ultimately make their home. It can also help spur former residents to come back to their roots.

“I’ve lived in New York and San Francisco, and I go out more at night in Tulsa because it’s just easier to get around and do things,” Bolzle says.

Although he claims it’s too early to measure the economic impact the initiative has had on Tulsa, he feels the positive response it’s gotten so far is a good sign. “I think the real measurement will be to see how many people choose to stay after the program is done,” he adds.

The city offers two housing incentives for would-be residents. The Buying into Baltimore program gives home-buyers a $5,000 forgivable five-year fixed-rate mortgage. For folks willing to move into one of Baltimore’s abandoned homes, the Vacants to Value incentive offers $10,000 toward a down payment and closing costs.

Maryland’s housing market could use the help. Home prices statewide appreciated only about 2.7% last year, according to the Federal Housing Finance Agency. At the same time, 11% of mortgages in the state are underwater — borrowers owing more than their home is worth — according to RealtyTrac/Attom Data Solutions. That is one of the highest figures in the country.

This county, located about 60 miles north of Detroit, is looking to attract young people in their late 20s who want to settle down and start their lives here. The incentive is dubbed the Come Home Award, a reverse scholarship that will pay students who have completed a college degree in a STEAM-related program (science, technology, engineering, arts or math).

Those promising to live and work in the county are eligible to receive up to $15,000 to make the move. (Yes, an incentive, not a loan.)

The state needs to grow its talent base. The Michigan workforce ranks 34th in the nation for educational attainment—about 28% of adults have a bachelor’s degree or higher in CNBC’s 2019 America’s Top States for Business ranking.

This Midwest city, with a population of about 24,000, is feeling the impact of the state’s low unemployment and worker shortages. In particular, it has a need for skilled workers for its large railroad as well as employees for factories, warehouses and medical centers. To attract these folks, the North Platte Area Chamber and Development Corp. developed a deal with local employers to match signing bonuses for out-of-town hires, up to $5,000. That’s a total potential signing bonus of $10,000 total.

This New England town, home of Yale University, epitomizes Connecticut’s workforce issues. The state has a highly educated workforce, but many are leaving — 33,000 college graduates moved out of state in 2017, while only about 26,000 moved in. New Haven is offering up to $80,000 in incentives for new homeowners.

First-time buyers can receive $10,000 in interest-free loans for down payments or closing costs and up to $30,000 in energy-saving upgrades for the home. Those who stay to raise their families here could be eligible for $40,000 for in-state college tuition, provided their children graduate from a New Haven public school.

A new approach to attract talent

No doubt, all these incentives are a step in the right direction, says Kasriel of Upwork, but “they need to be part of a broader conversation.” Cities need to invest in becoming attractive to the kind of populations they’d like to attract and retain, he says. For most places, this means highly skilled people of working age. Companies, with large headquarters in major cities, can also play a role. Rather than require workers to move where they are, they can give employees the choice to work remotely from a place where it makes the most economic sense.

That’s what Beth Dow and her husband Jonathan did earlier this year. She was one of 33 applications approved for the Vermont remote-worker program. The couple were both living and working in Denver when Jonathan came across a news story last May about the initiative.

“He sent me the story, and I thought he was joking,” said Beth. But after carefully running through the financials, the couple thought it might make sense. When Jonathan was laid off from his job last June, they became more serious about it. Beth, who’s a commercial property claims adjuster, approached her company in Denver and asked if they were open to her working remotely. They were, so she submitted an application. On Jan. 4 she and Jonathan moved to Bennington, in the southwest part of the state.

Although she says the property taxes in Vermont are higher than in Denver, the house they purchased was about half the price. They’re also in the process of opening an art gallery in downtown Bennington, something they couldn’t afford to do in Denver.

“The money from the state of Vermont was absolutely instrumental in our decision to move,” she said. “We love it here so far, but I don’t think we would have done it without the incentives.”