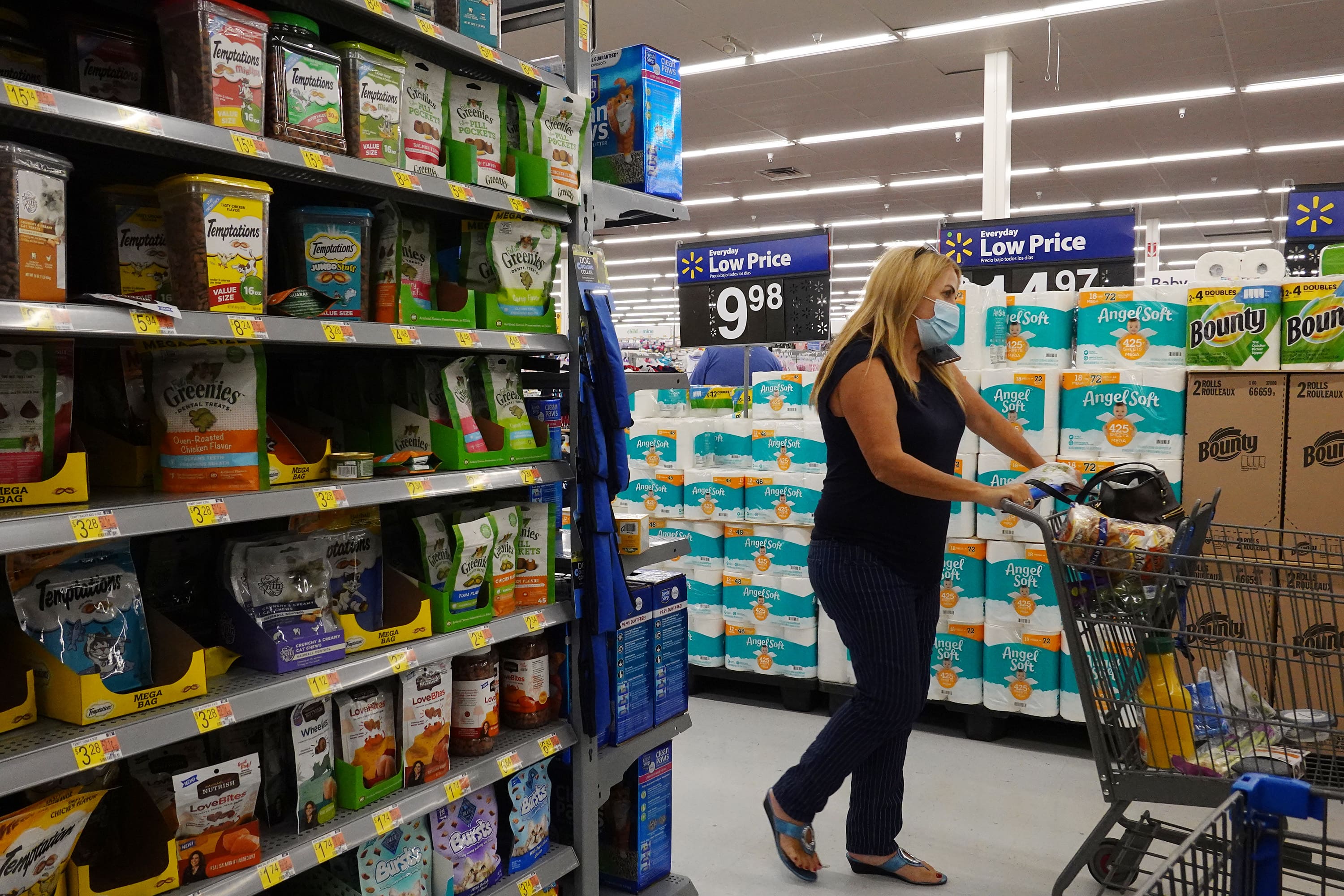 Walmart on Tuesday reported second-quarter earnings that exceeded Wall Street expectations as the retail giant gained ground in groceries and had a strong start to the back-to-school season.Shares closed Tuesday down 0.03% to $150.70.The discounter also sharpened its forecast for the year, saying it now anticipates that earnings per share will range from $6.20 to $6.35. It said it expects Walmart U.S. same-store sales to increase by 5% to 6%, excluding fuel.Chief Financial Officer Brett Biggs said in an interview with CNBC that customers flocked to stores for items like luggage, party supplies and apparel as they were “coming out of hibernation.” Plus, he said, families have been buying backpacks and items for the classroom.Biggs said the company is watching the delta variant closely as Covid cases rise, but it has not seen a change in customers’ shopping patterns.”Mask wearing is back up again, but runs on supplies — things we saw in last March, April [of 2020] — we really haven’t seen again,” he said.CEO Doug McMillon said in a news release that the company grabbed more market share in grocery, one of its core businesses. He said it has also made progress in new areas, adding thousands of online sellers to its third-party marketplace and nearly doubling advertising sales in Walmart U.S. in the quarter versus a year ago. Here’s what the company reported for the fiscal second quarter ended July 31, according to Refinitiv consensus estimates:Earnings per share: $1.78 adjusted vs. $1.57 expectedRevenue: $141.05 billion vs. $137.17 billion expectedWalmart is lapping a year-ago quarter when stimulus checks lifted sales despite limited store hours and customers’ concerns about Covid-19. Last year, Walmart faced new competition as some customers chose to buy groceries at smaller or more convenient supermarkets during the pandemic. Walmart also saw a shift toward e-commerce, as other shoppers looked to avoid going inside stores.Over the past two quarters, the discounter said some of those major trends have reversed. Walmart is gaining market share in grocery again, according to Nielsen data, as consumers return to old habits. Its food sales grew $2.4 billion versus a year ago, as Walmart attracted shoppers with lower prices and better managed to keep produce, meats and more in stock, Biggs said on an earnings call.Customers have also swung back to shopping more at stores. Walmart U.S. transactions rose by 6.1% but the average ticket fell nearly 1%. Same-store sales gained momentum each month during the quarter, Biggs said.Growth of sales at stores and online have slowed, however, when compared with a frenzied period of buying food and items for the home during the earlier part of the health crisis. Walmart’s same-store sales in the U.S. grew by 5.2%, higher than the increase of 3.3% expected by analysts, according to a StreetAccount survey, but lower than the 9.3% it saw in the same quarter a year ago. Over the past two years, the retailer said its same-store sales have increased by 14.5%.E-commerce sales gains in the U.S. have dropped off significantly, too, growing 6% in the second quarter versus 97% in the year-ago period. They had risen by 37% in the first quarter and 69% in the fourth quarter. Looking over the past two years, however, the retailer said e-commerce sales have doubled.Walmart said it expects its global e-commerce sales to reach $75 billion for the year.Walmart reported net income fell to $4.28 billion, or $1.52 per share, from $6.48 billion, or $2.27 per share, a year earlier. Excluding items, the company earned $1.78 per share. Analysts were expecting Walmart would earn $1.57 per share, according to Refinitiv.Walmart reported its highest quarterly revenue ever for a three-month period outside of the holiday season. Total revenue rose by 2.4% to $141.05 billion from $137.74 billion a year earlier, exceeding Wall Street’s expectations of $137.17 billion.Walmart U.S. CEO John Furner said on an earnings call that the company’s huge size has helped it navigate supply chain challenges and inflation pressure. He said the company has chartered its own vessels to import goods and secured supplies earlier, so it is prepared for the third and fourth quarter.By selling more food and other goods, he said it can keep its price increases modest.Same-store sales for Walmart subsidiary Sam’s Club increased by 7.7% excluding fuel — more than the 3.7% growth expected by analysts.The company said it anticipates that same-store sales at Sam’s Club will increase this year by 7.5% to 8.5%, excluding fuel and tobacco.Walmart shares have trailed other pandemic beneficiaries in the retail industry. As of Monday’s close, Walmart shares were up about 5% this year compared with Target and Kroger, which have seen shares increase 49% and 37%, respectively, in 2021. It also lags behind the S&P 500’s 33% gain.Read the company’s press release here.—CNBC’s Courtney Reagan and Robert Hum contributed to this report.