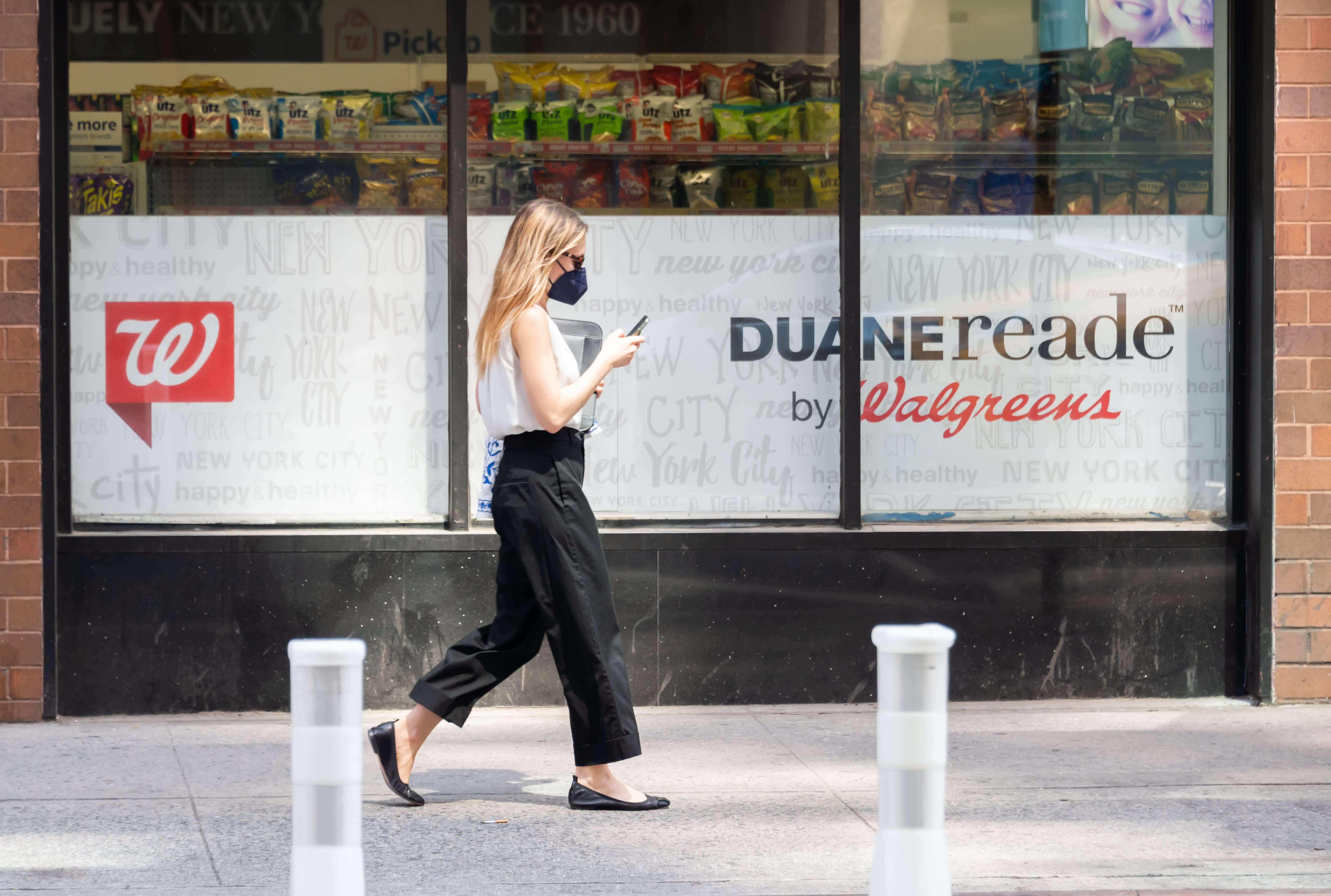 Walgreens Boots Alliance on Thursday raised its outlook for the year and laid out its strategy to drive growth, after a stronger-than-expected fiscal third quarter.The drugstore chain said it now anticipates about 10% growth in adjusted earnings per share for the year, due to rebounding sales and the boost from Covid-19 shots. It had previously forecast growth in the mid-to-high single digits. So far, the company said it has administered more than 25 million vaccines.The shares rose by more than 3% initially in premarket trading, but began to trend downward on concerns that vaccines and revenue that comes with them will slow in the quarters ahead. The stock was down more than 6% early Thursday.The company is in the midst of a turnaround led by its new CEO, Roz Brewer, former chief operating officer of Starbucks. Even before the pandemic, drugstore chains were under pressure as online retailers like Amazon stole away sales of everyday items, like toothbrushes and shampoo, along with pharmacy sales. The global health crisis accelerated that e-commerce shift, caused foot traffic to fall and forced companies to come up with new ways to stay relevant.On Thursday, Walgreens shared more details about its strategic priorities. Among them, the drugstore chain said it will turn itself into a neighborhood health destination as it opens primary-care clinics with VillageMD at hundreds of its stores and will use automation to free up time for pharmacists to provide care and answer customers’ questions. The company said it also plans to focus on digital, so more people use its app and receive personalized offers that inspire purchases. And it said it will continue to work toward reducing annual costs by more than $2 billion by next fiscal year.”This quarter’s results demonstrate continued momentum, and while challenges lie ahead, we are in a strong position to grow and innovate our core retail and pharmacy businesses for the future,” Brewer said in a press release.Here’s what Walgreens reported compared with what analysts were expecting for the third quarter ended May 31, based on Refinitiv data:Earnings per share: $1.51 adjusted vs. $1.17 expectedRevenue: $34.03 billion vs. $33.76 billion expectedIn the quarter, Walgreens posted a net profit of $1.20 billion, or $1.38 per share, compared with a net loss of $1.71 billion, or $1.95 per share, a year earlier.Excluding items, the company earned $1.51 per share, higher than the $1.17 expected by analysts surveyed by Refinitiv.Sales rose to $34.03 billion from $30.36 billion a year earlier, exceeding the $33.76 billion that analysts expected.Covid vaccines — one of the company’s bright spots — peaked in the third quarter, said Walgreens Global Chief Financial Officer James Kehoe. He said the company expects to administer around 7 million Covid vaccines in the fourth quarter, down from 17 million in the third quarter.Kehoe acknowledged that the drugstore chain will face tough comparisons because of that next year. However, he said, it has seen momentum as people return to more typical shopping patterns and prescription refills. It also anticipates sales will pick up as it invests in modernizing the company and has a more normal cold and flu season next year.Walgreens’ same-store sales in the U.S. rose by 6.4% compared with a year ago, a quarter when the company’s sales were hit hard by people largely staying at home during the pandemic. Prescriptions filled in the third quarter grew nearly 10% from the year-ago period, including the lift from Covid vaccinations.Walgreens’ international business in the United Kingdom saw a resurgence, especially compared with a year ago. At Boots UK, comparable retail sales jumped by about 39% year over year due to the easing of lockdown measures and people returning again to stores near airports, train stations and major parts of town. Comparable pharmacy sales increased about 4% compared with the year-ago quarter.In the front of the store, comparable retail sales rose 1.7% compared with the year-ago quarter, as more customers received personalized offers, bought beauty items and printed photos.As of Wednesday’s close, Walgreens shares are up about 32% so far this year. The company’s market value is $45.48 billion.Read the company’s press release here.

Rise in online payments spurs questions over cybersecurity and privacy
Toyota tops GM sales in the U.S., expected to be America’s best-selling automaker
To Top
error: Content is protected !!