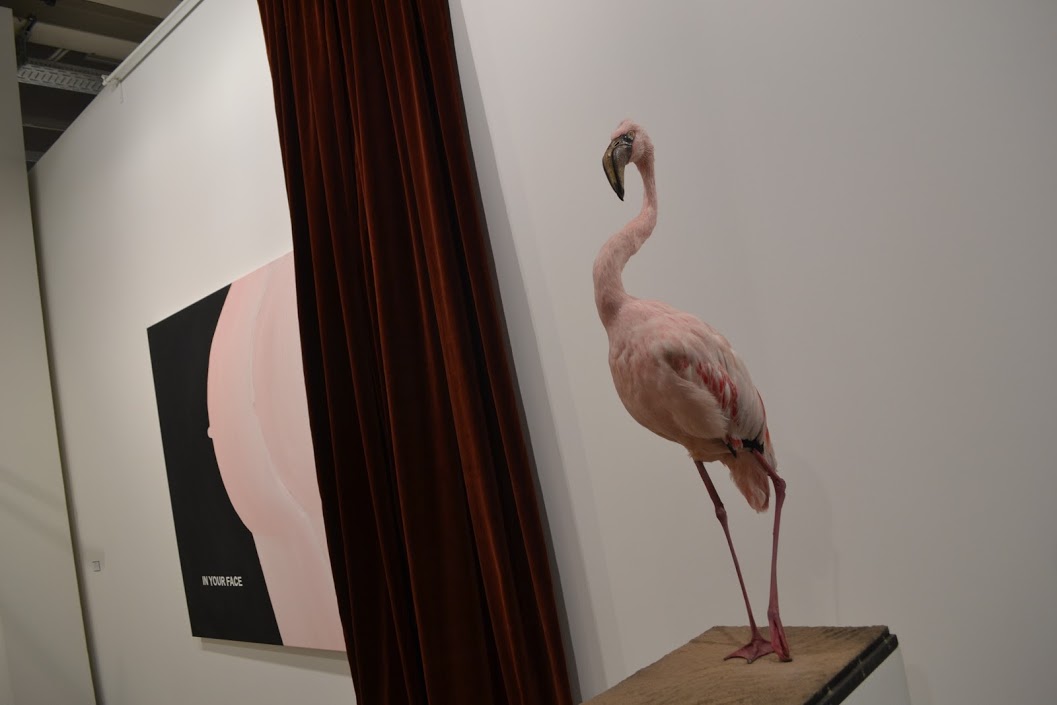 Works by Laure Prouvost, France’s representative at the Venice Biennale, on the stand of Carlier Gebauer, which has galleries in Berlin and Madrid.

Because of the Venice Biennale’s change in schedule a few years back, the days of traipsing from the floating city in Italy to Switzerland are a thing of the past, but the two venues generally still share a close connection in terms of the art that is on view. Indeed, that may be especially the case this year, since Ralph Rugoff’s edition of the Venice Biennale was filled with many closely watched, market-friendly names—Jason Farago of the New York Times termed it “the artistic equivalent of Top of the Pops.” Whatever your position on that, there is no doubt that Biennale-affiliated artists are filling booths at Art Basel, which opened Tuesday to select guests.

At the booths for 47 Canal (New York) and Gladstone (New York and Brussels), works by Anicka Yi are on offer, including (at the former) one of the algae lanterns she showed in Venice at the Arsenale. The offerings at 47 Canal also include work by Antoine Catala, who is out front in the Central Pavilion section of Rugoff’s show. 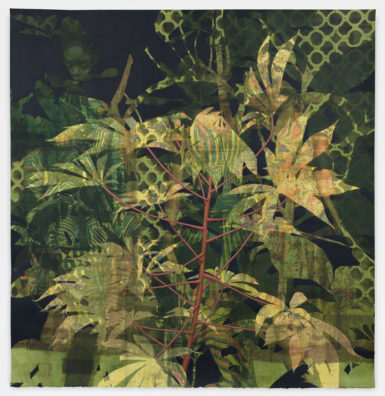 Njideka Akunyili Crosby, Dwellers: Native One, 2019, was on offer in the booth of David Zwirner, for an undisclosed price, at Art Basel 2019.

Arthur Jafa, who took home the Biennale’s top prize, the Golden Lion, for his searing video The White Album (2018), is showing new work with Gavin Brown’s Enterprise, of New York and Rome, in the form of a cut-out sculpture of a black Hulk and a wall piece titled Bloods (2019) that pairs photos of Miles Davis and Robert Johnson, both early in their careers.

Njideka Akunyili Crosby, a star of Venice with work in the main Biennale show and in a solo outing in the city with the gallery Victoria Miro, had a new work sell at David Zwirner (New York/London/Hong Kong) for an undisclosed price to an American museum, according to a spokesperson for the gallery. Zwirner also parted with a Luc Tuymans—whose retrospective is running at the Palazzo Grassi in Venice—for in exchange for $1.2 million paid by a Taiwanese collector.

Many Biennale artists are in more than one place in Basel: works by Christian Marclay are in the booths of Fraenkel (San Francisco), Paula Cooper Gallery (New York), and White Cube (London/Hong Kong). Julie Mehretu, meanwhile, is also on hand at Marian Goodman (New York/Paris/London) and Carlier Gebauer (Berlin/Madrid), which in turn has a number of pieces by France’s representative in Venice, Laure Prouvost, whose wildly diverse work includes a taxidermy flamingo and a painting of a bare breast.

Among other national picks from Venice, Estonia’s Kris Lemsalu has a solo outing in Art Basel’s “Statements” section with Temnikova & Kasela (Tallinn), and Ireland’s Eva Rothschild is showing geometric sculptures related to her Venice outing with Kaufmann Repetto (Milan/New York). 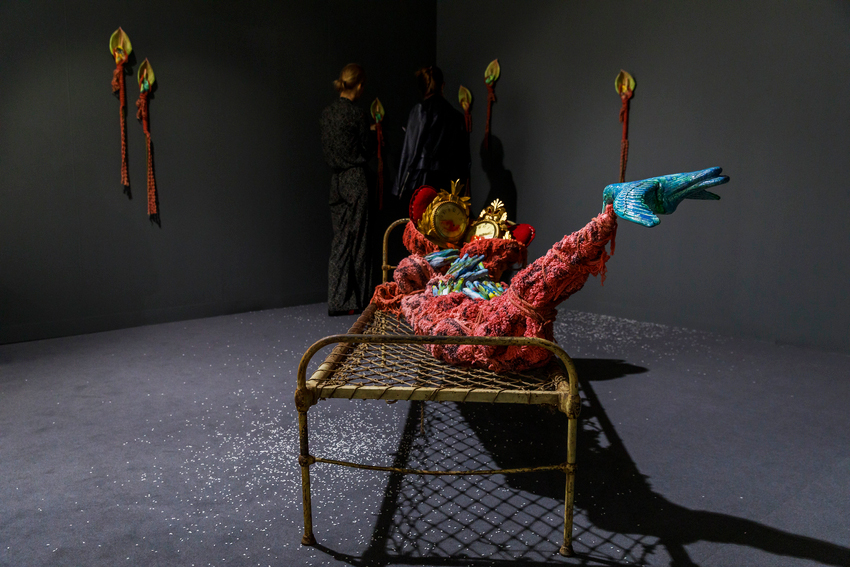 Installation view of “Kris Lemsalu: Awake at Night,” 2019, rresented by Temnikova & Kasela, of Tallinn, Estonia, in the Statements Section of Art Basel 2019.

Even artists whose work takes a tough political edge are finding buyers in Basel: Lawrence Abu Hamdan, who figures in Rugoff’s Venice show, had a new screen-based work sell at London’s Maureen Paley gallery for an undisclosed price. (The gallery also sold a Rebecca Warren sculpture for £175,000 [about $223,00] and a Wolfgang Tillmans photograph for $100,000.)

Still more artists in Basel from the main Venice show: Henry Taylor at Blum & Poe, with a painting of a man holding what appears to be fabric—maybe an American flag?—over his shoulder at international outfit Blum & Poe; Jeppe Hein with metal balloons at Nicolai Wallner (Copenhagen); Anthea Hamilton at Kaufmann Repetto; Dominique Gonzalez-Foerster and Tomás Saraceno at Esther Schipper (Berlin); and Frida Orupabo at Nordenhake (Berlin/Stockholm).

Other WhiBi-affiliated artists in Basel include Heji Shin, with photos of Lindsay Lohan and a gargantuan Kanye West for a very special kind of collector at Reena Spaulings Fine Art (New York and Los Angeles); Jeffrey Gibson, with a painting of acrylic, glass beads, and artificial sinew with Sikkema Jenkins & Co. (New York); Calvin Marcus, with a cartoonish painting of a bloody head, at David Kordansky (Los Angeles); Lucas Blalock at Eva Presenhuber (Zurich and New York); and Diane Simpson at Herald St. of London.

Those collectors who want to continue their research on the biennial circuit after Basel, but have already been to Venice and the Whitney, can head next to Ljubljana, Slovenia, where the city’s Biennial of Graphic Arts opened just last week. Venice veterans Slavs and Tatars are its curators.