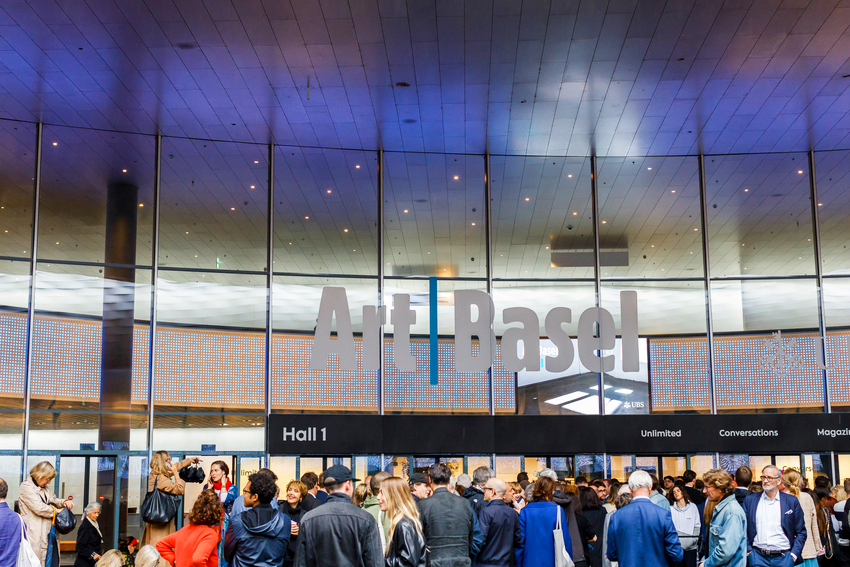 The atmosphere during the VIP opening of Art Basel 2019.

Just a half-hour into the VIP preview of the 50th edition of Art Basel on Tuesday, megacollector Steven Cohen, who reportedly bought Jeff Koons’s stainless steel Bunny sculpture at auction last month for a record $91 million, could be spotted at the booth of Pace Gallery, which operates locations in New York, London, and elsewhere in the U.S., South Korea, Hong Kong, and Switzerland. Later in the day, Pace president Marc Glimcher said his gallery sold 70 percent of its booth before 5 p.m., including works by Lee Ufan, Joel Shapiro, Yoshitomo Nara, Mary Corse, Robert Mangold, and Wayne Thiebaud. “The fair is really impressive this year,” Glimcher said, while keeping mum on whether or not Cohen had been one of his buyers. “The rumors of tough times in the art market are once again greatly exaggerated.”

Pace wasn’t the only gallery to sell well. Hauser & Wirth on opening day reported selling 30 works—though those include sales not just at the fair but through a catalogue of offerings it published in advance of Art Basel. Sales from the gallery’s booth included two never-before-seen sculptures by John Chamberlain—COMEOVER for $3 million and PARISIANESCAPADE for $750,000. Last month, Hauser & Wirth announced its worldwide representation of the Chamberlain estate, and other galleries seemed to be testing the Chamberlain waters, like Lévy Gorvy, which had Iron Stone, a large Chamberlain from 1969, plopped in the center of its booth and priced at $2.9 million. (Chamberlain’s auction record remains $5.5 million.)

Despite the optimism of Glimcher at Pace, another dealer and an art adviser at the fair said that the story this year—at least in terms of primary-market material—is the practice of pre-selling on the part of galleries that retain a certain nervousness about recouping costs and jitters about the market in the face of uncertainty around the globe.

Cohen wasn’t the only major collector on hand. Leon Black and Leonard Lauder are in town (the latter possibly to see work he donated to the Metropolitan Museum of Art that is now on loan to the Basel Kunstmuseum for the show “The Cubist Cosmos: From Picasso to Léger”), as are Eugenio López Alonso, Jean Pigozzi, and others. 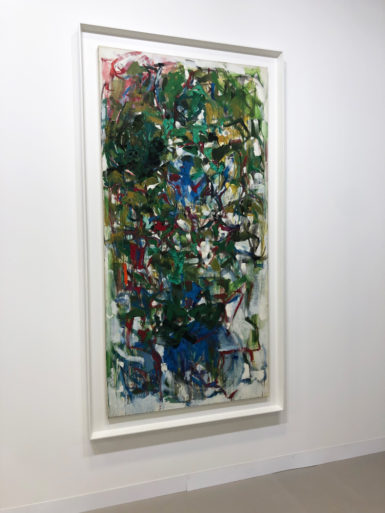 The first floor of Art Basel, where dealers tend to showcase historical and secondary-market art, was buzzing. David Zwirner sold a 1966 painting by Gerhard Richter for $20 million to what the gallery characterized as “a major private collection in the U.S.” Zwirner also parted with Kerry James Marshall’s Laundry Man (2019) for $3.5 million and a large 1967 painting by Joan Mitchell for more than $6 million. (The gallery, which began representing Mitchell’s estate last year, currently has a show of her work up in New York.)

Last year was very much the year of Mitchell, with several dealers bringing paintings by the artist after her 1969 painting Blueberry sold for a record $16.6 million at Christie’s New York. And this year’s fair has its share of Mitchells too. Mnuchin Galery sold a small painting from 1960, with an asking price of $2 million. (Also shown in Mnuchin’s booth at Art Basel Miami last December, the work last sold at auction in 1997, at Christie’s New York, for $68,500.)

A large Joan Mitchell displayed front-and-center at Richard Gray’s booth hasn’t been on the market in 15 years and is priced at $12 million. The gallery saw early interest in the painting, said director Valerie Carberry, who attributed a good first day to several sales to both new and pre-existing clients—including a Leon Polk Smith painting for $350,000 and a granite sculpture by Jaume Plensa for $400,000. Gray also sold an Alex Katz painting, Summer Triptych (1985), for $1.7 million, surpassing Katz’s auction record of $1.2 million, set this past March at Christie’s London by the 1987 painting Ada and Louise. 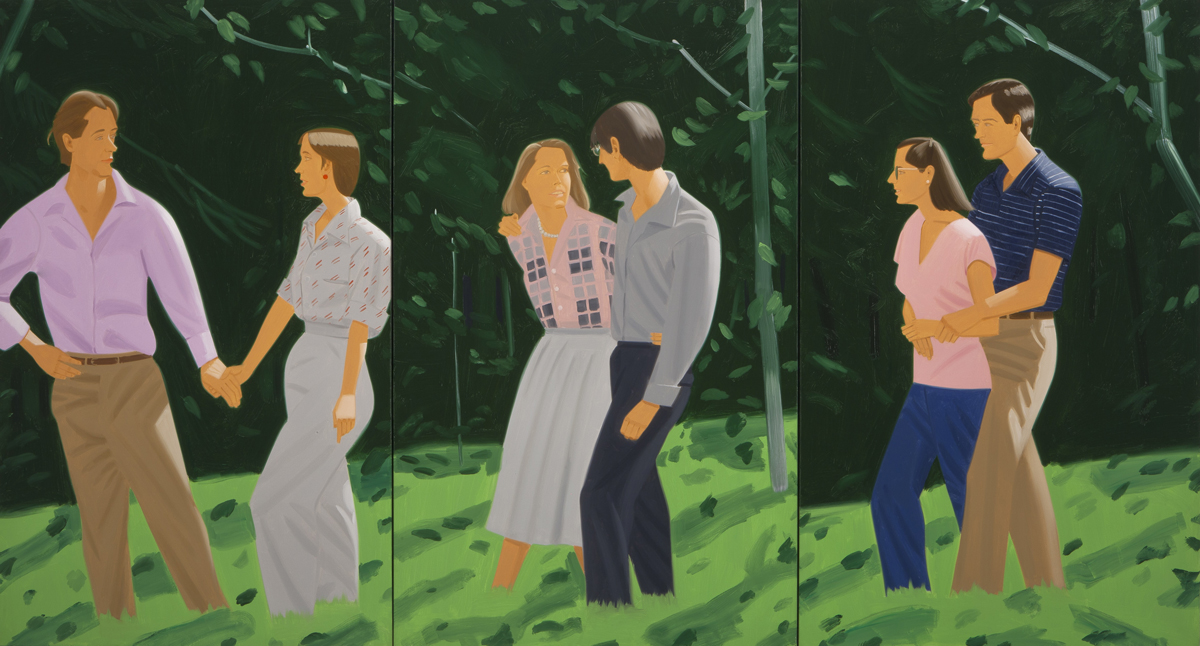 Since this year’s fair coincides with the Venice Biennale—the 58th edition of which opened in Italy last month—lots of work from Venice artists featured in the booths at Basel (and inventoried by ARTnews here). One might also file under “The Venice Effect” the many pieces at the fair by the late Greek artist Jannis Kounellis, the subject of a retrospective at the Fondazione Prada. Gavin Brown’s Enterprise, which recently staged a mammoth show of Kounellis in New York, has two pieces, one from 1963 and another from 2008. White Cube has one of Kounellis’s metal-and-fabric pieces from 1996. Almine Rech Gallery, which has a Kounellis show up in London, is showing a couple works by Kounellis, and Sprovieri has brought a sprawling installation by the artist to the “Unlimited” section of the fair. 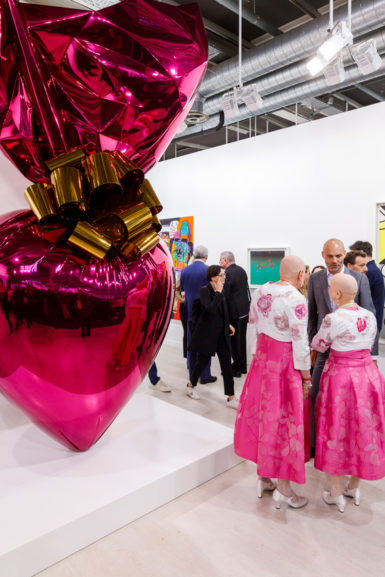 The action in Gagosian’s booth at Art Basel 2019, with Jeff Koons’s Sacred Heart at left.

The most visible—and maybe the most discussed—work at the fair is by the artist recently declared (once again) the most expensive living artist at auction: Jeff Koons (for his $91 million Bunny). Standing out in Gagosian’s booth is a huge Koons Sacred Heart from the artist’s “Celebration” series; to its right, perhaps as a kind of market joke, is a large dollar-sign painting by Andy Warhol. Gagosian declined to give a price for the Koons, but several sources at the fair put it in the vicinity of $14 million to $15 million. Elsewhere, at the booth for Mnuchin, was Koons’s iconic bust Louis XIV from 1986, in stainless steel and from the same series as the Bunny. Priced at $10 million, it hadn’t sold by Tuesday afternoon—but it seemed at home in Mnuchin’s booth, given that gallery founder Robert Mnuchin was the bidder who recently won the Bunny at auction (reportedly for Cohen).

Speaking of last month’s auctions, the record-breaking Robert Rauschenberg work that reset his record at Christie’s from $18.6 million to a whopping $88.8 million (for the iconic Buffalo II, 1964, which features an image of U.S. president John F. Kennedy), may have helped Thaddaeus Ropac sell several Rauschenberg works, including Crossings (Borealis), a tarnish and silkscreen ink on brass from 1990 sold to a collector from Germany for $1.7 million, and Proof (Salvage), a painting from 1984 that sold for $1.3 million.

Mnuchin also has a large painting by Rudolf Stingel, who currently has an exhibition at Basel’s Beyeler Foundation. Gagosian has a Stingel too—as do Lévy Gorvy and White Cube.

Also in the department of mid-career blue-chip artists, Mnuchin sold a 2002 Mark Bradford painting, Fly in the Buttermilk, made with his signature permanent end papers. The asking price was $3.5 million—after it was sold at Christie’s in November 2011 for just $290,500 as part of the collection of Silicon Valley software entrepreneur Peter Norton, who bought it from Los Angeles gallery Susanne Vielmetter the year it was made.

Lévy Gorvy sold, for around $5 million, a 2014 Marc Grotjahn painting, Untitled (Indian #2 Face 45.47), whose consignor bought it from the L.A. gallery Blum & Poe shortly after it was painted. (Lévy Gorvy had the work on hold for a client who confirmed the purchase in person.) Lévy Gorvy also sold a large Christopher Wool silkscreen from 2009 in black and red for around $6 million.

It’s impossible not to note how many Alexander Calder sculptures abound at Art Basel this year, most of them top-quality, relatively fresh to the market, and offered above previous market prices. Most of the galleries showing them work directly with the artist’s estate, including Pace—which, as it happens, will inaugurate its new 75,000-square-foot global headquarters in New York in September with a focused exhibition dedicated to Calder on its first floor. 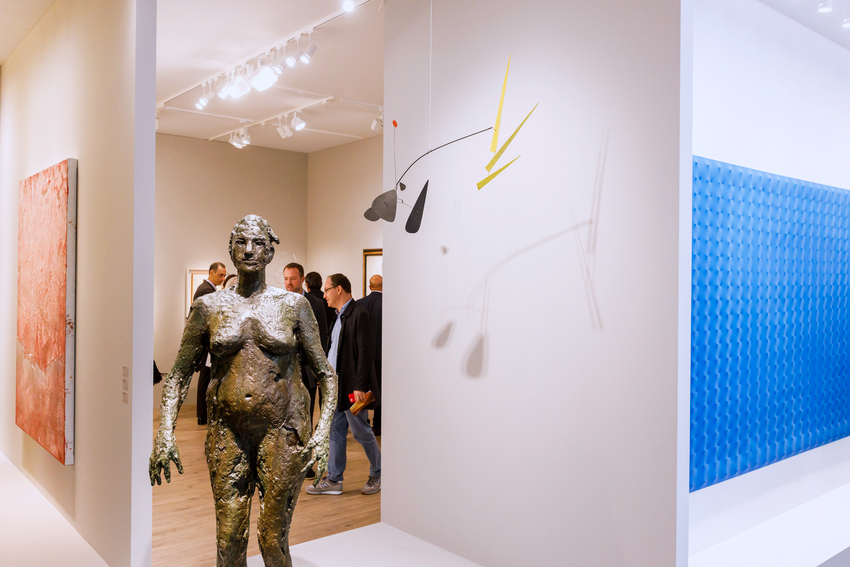 View of the booth of Lévy Gorvy, of New York, London, and Hong Kong, with an Alexander Calder mobile at center right.

So extensive are the fair’s Calder offerings that one could assemble them and put together a sensible survey exhibition. Taken in roughly chronological order: Hauser & Wirth has a 1938 mobile, Black Areas, for $4.2 million, and a tiny work from 1942, for $2 million. Di Donna has one of the wooden sculptures that Calder made during World War II mounted high on a wall and priced at $12 million. (It sold at Sotheby’s New York in May 2011 for $3.1 million.) Lévy Gorvy has a small 1943 Calder mobile (apparently a gong when struck) directly from the Calder family and never before on the market, for $4.8 million. (On Tuesday it was on reserve.) Richard Gray has a black stabile—Monocle—from 1947. Acquavella Galleries has a small piece from 1948 priced at $6.5 million.

Pace’s Calder work—variously called Untitled and Four Above Ten Blacks, from 1956—sold at auction recently, at Christie’s New York in November 2017 for $3.9 million. Its first owner was the Italian artist Alberto Burri, to whom Calder gave the sculpture as a gift. Since then it has come up for auction three times (in 1987, 1995, and 2017), and Pace sold it at the fair for $8.5 million. Van de Weghe gallery has a tiny untitled stabile with mobile elements from 1960. Tina Kim has an untitled mobile from 1963, in black and red, priced at $3.8 million.

In a shrine-like arrangement at Helly Nahmad Gallery, two Calder mobiles, including Red Sumac (a 1972 work priced at $5.8 million after it sold for $4.1 million at Sotheby’s last November), flank a large not-for-sale Mark Rothko painting from 1954. (That would be Rothko’s Dark Over Light, which sold at Christie’s last year for $30.6 million, on one bid, to its guarantor; it was last up for auction before that at Christie’s in 2007, when it sold for $21 million.)

Galeria Elvira Gonzalez’s Calders include Crag with Yellow Boomerang and Red Eggplant (1974) and a red-black-and-blue mobile, Machette, from 1975. And there’s more to come, as Glimcher said that on Wednesday Pace gallery will bring out White Ordinary, a large black-and-white work from 1976 and possibly the last mobile that Calder made, for a price of $8.5 million.

Also at Pace was a David Hockney painting from 1992, the first of his “Very New” or “VN” series, on reserve on Tuesday for $3.5 million. Around the corner, one can sit on a bench and look at a life-size recent photograph of Hockney in his studio by Rineke Dijkstra, hanging on the outer wall of Marian Goodman Gallery’s booth. In the picture, the painter, who briefly held the title of most expensive living artist at auction ($90 million, until that was topped by Koons’s Bunny), seems to smile mischievously, holding a cigarette. Three of the edition have sold.

In Argument Before Judge, Lawyer for Andy Warhol Foundation Says Pop Artist Did Not Copy Photo of Prince -ARTnews
Venice Biennale Artists Out in Force at Art Basel -ARTnews
To Top
error: Content is protected !!