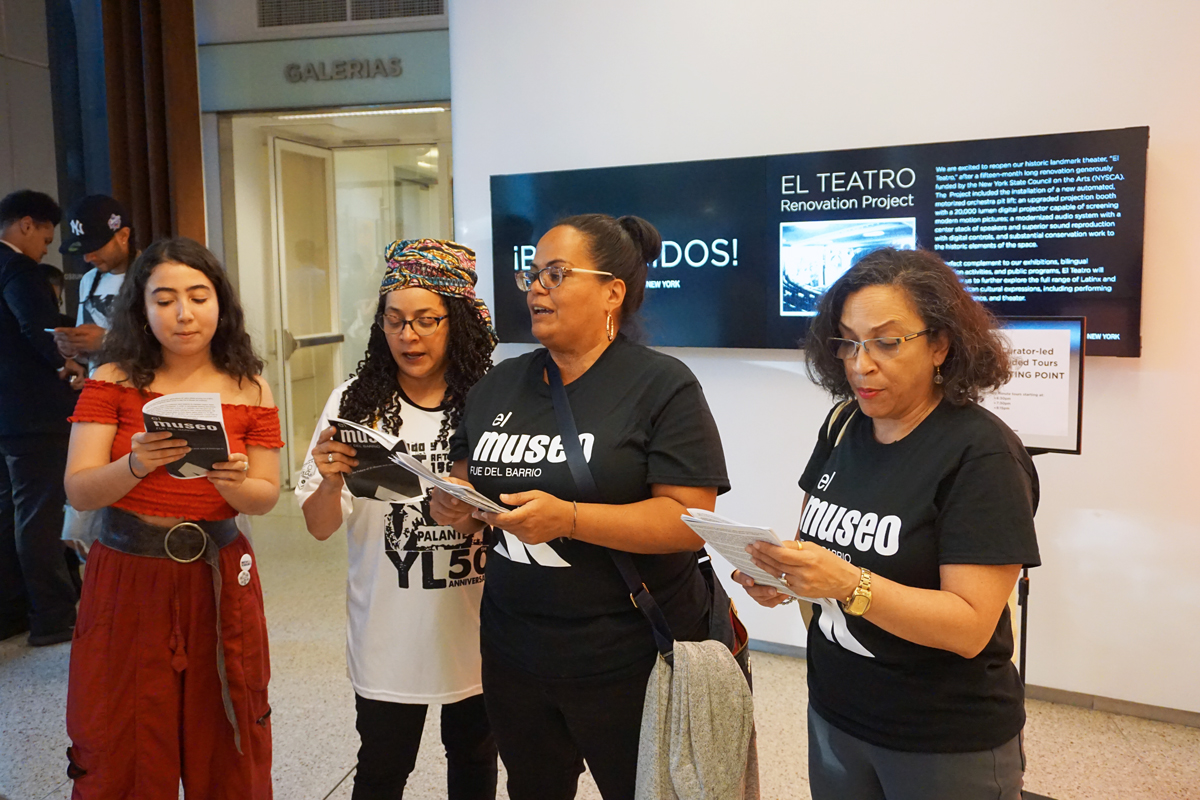 Activists read the “Mirror Manifesto” demanding change at El Museo del Barrio, in the institution’s lobby, as part of an action on Tuesday evening.

Community members in East Harlem continued their campaign to effect change at New York’s El Museo del Barrio on Tuesday evening, staging an action inside the museum during the annual Museum Mile Festival, which takes place along Fifth Avenue.

As part of the action, a group of about a dozen activists read the majority of their “Mirror Manifesto,” an open letter first published in March that demanded that El Museo change its policies to better meet the demands of the surrounding community. Since its publication, the manifesto has been signed by over 500 artists, curators, arts professionals, community members, activists, and more. 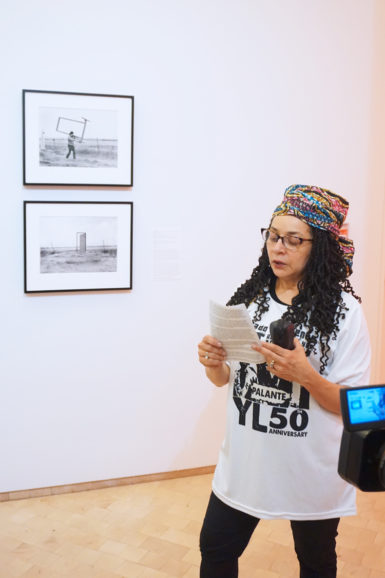 Curator Yasmin Ramírez reads the “Mirror Manifesto” in front of two photographs by Chicano artist Richard A. Lou, which are currently on view at El Museo del Barrio.

The manifesto was drafted by a group of Latinx activists, artists, educators, and scholars in the wake of a series of controversies that have roiled El Museo earlier this year, including the reversal on a plan to honor a conservative German socialite and princess with no ties to the museum, the cancelation of a retrospective of Chilean-born artist and director Alejandro Jodorowsky amid allegations of sexual assault, and the hiring of Rodrigo Moura, who hails from Brazil, as chief curator.

“This action today is about planting the seeds for community awareness and education,” Debbie Quinones, one of the activists, told ARTnews. Quinones noted that Tuesday marks the seven-year anniversary of the death of East Harlem community leader Yolanda Sánchez. “Yolanda would always say, ‘Debbie, where are the Puerto Ricans and what are they doing about it?’ That’s something that has always resonated with me.”

The manifesto calls for the museum to better adhere to its mission “to present and preserve the art and culture of Puerto Ricans and all Latin Americans in the United States.” It also demands the creation of an artist residency program; a chief curator who is a specialist in Latinx art; a curatorial staff better equipped to organize exhibitions of Latinx art; and a restructuring of El Museo’s board such that it mirrors “the diverse Latinx communities, and that it is racially diverse.”

“It is timely and necessary for El Museo del Barrio to re-dedicate itself to its unique mission of exhibiting and collecting art by Puerto Ricans and Latin Americans living in the United States—in other words, that it focuses on Latinx art and artists,” the manifesto reads.

A representative for El Museo del Barrio did not immediately provide ARTnews with a comment on Tuesday’s action. 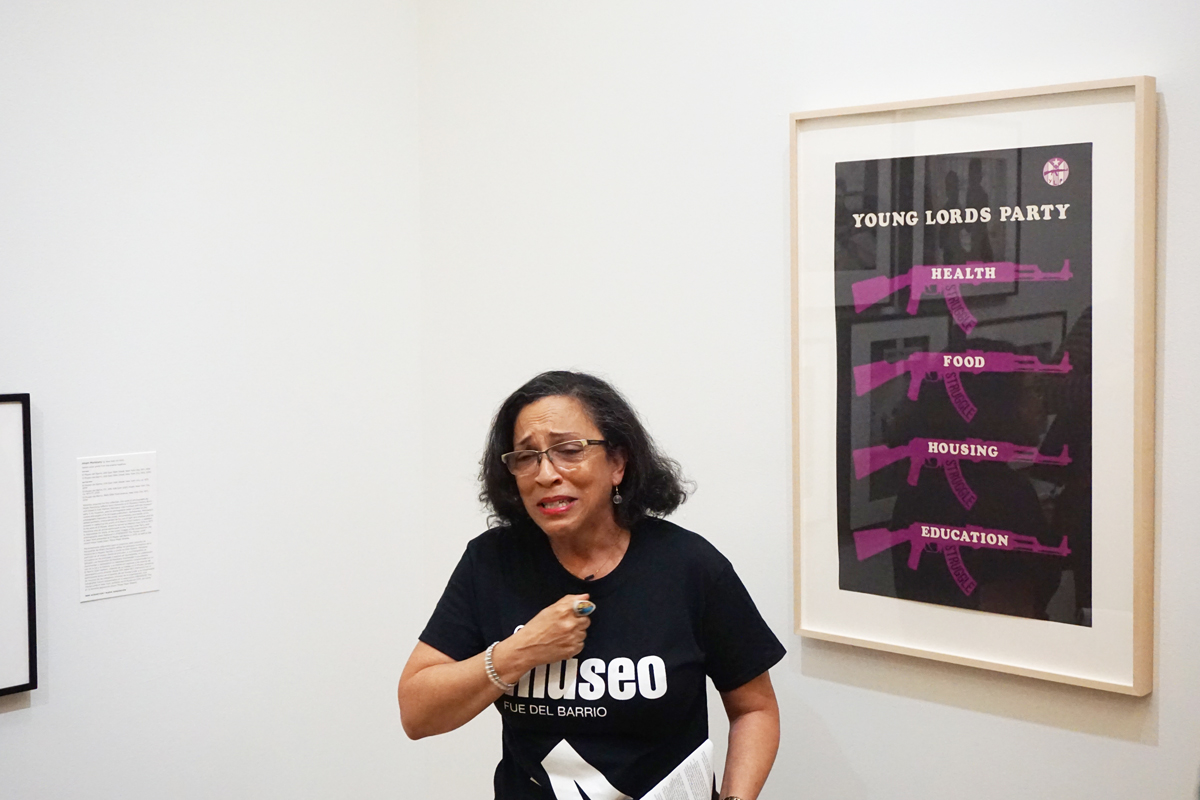 Activist Debbie Quinones reads the “Mirror Manifesto” in front of a serigraph produced by the Young Lords Party, currently on view at El Museo del Barrio.

Yasmin Ramírez, a curator and former El Museo board member, was one of the activists present at the action. She pointed to other museums in New York City that she said were doing a better job of presenting the work of Latinx artists. Among them, she said, are the Queens Museum, which has on view the show “Mundos Alternos: Art and Science Fiction in the Americas,” and the Whitney Museum, which has begun placing a greater emphasis on Puerto Rican art.

“Negotiations with the director and the board did not result in substantive change,” Ramírez said, adding, “It’s a matter of trying to work out the best way for this museum to move forward in accordance with its mission statement.”

The “Mirror Manifesto” was read inside the museum’s galleries, in front of four artworks included in El Museo’s 50th-anniversary permanent-collection exhibition “Culture and The People: El Museo del Barrio, 1969 – 2019.” These pieces were a serigraph by Puerto Rican activist group the Young Lords, a mixed-media installation by Dominican artist Nicolás Dumit Estévez (who signed the manifesto), and two photographs by Chicano artist Richard A. Lou.

Activists led a procession through the galleries, chanting, “We will not be erased!” and, “Decolonize the museum!” Four members of the group then read the manifesto in the museum’s lobby in unison. Patrick Charpenel, the museum’s executive director, was present during the beginning of the action.

El Museo del Barrio was founded in 1969 by artist Raphael Montañez Ortiz, who served as its first director, along with a group of Puerto Rican artists, activists, and educators who set out to educate the Nuyorican community, particularly the children born in the United States, about the art and culture on the island.

For Ramírez and the other activists, the museum has lost sight of this original goal. “We have to double down on the mission of promoting Latinx artists in the United States because we’re still viewed as foreigners,” Ramírez said. “This [museum] started out as a black and brown institution . . . . We can’t evaluate this museum’s success without looking at issues of race and class, and in that [way], it has failed. Where is the progress here?”

With Estimate of $10 M. to $15 M., Lee Krasner Painting Could Break Artist Record at Sotheby’s -ARTnews