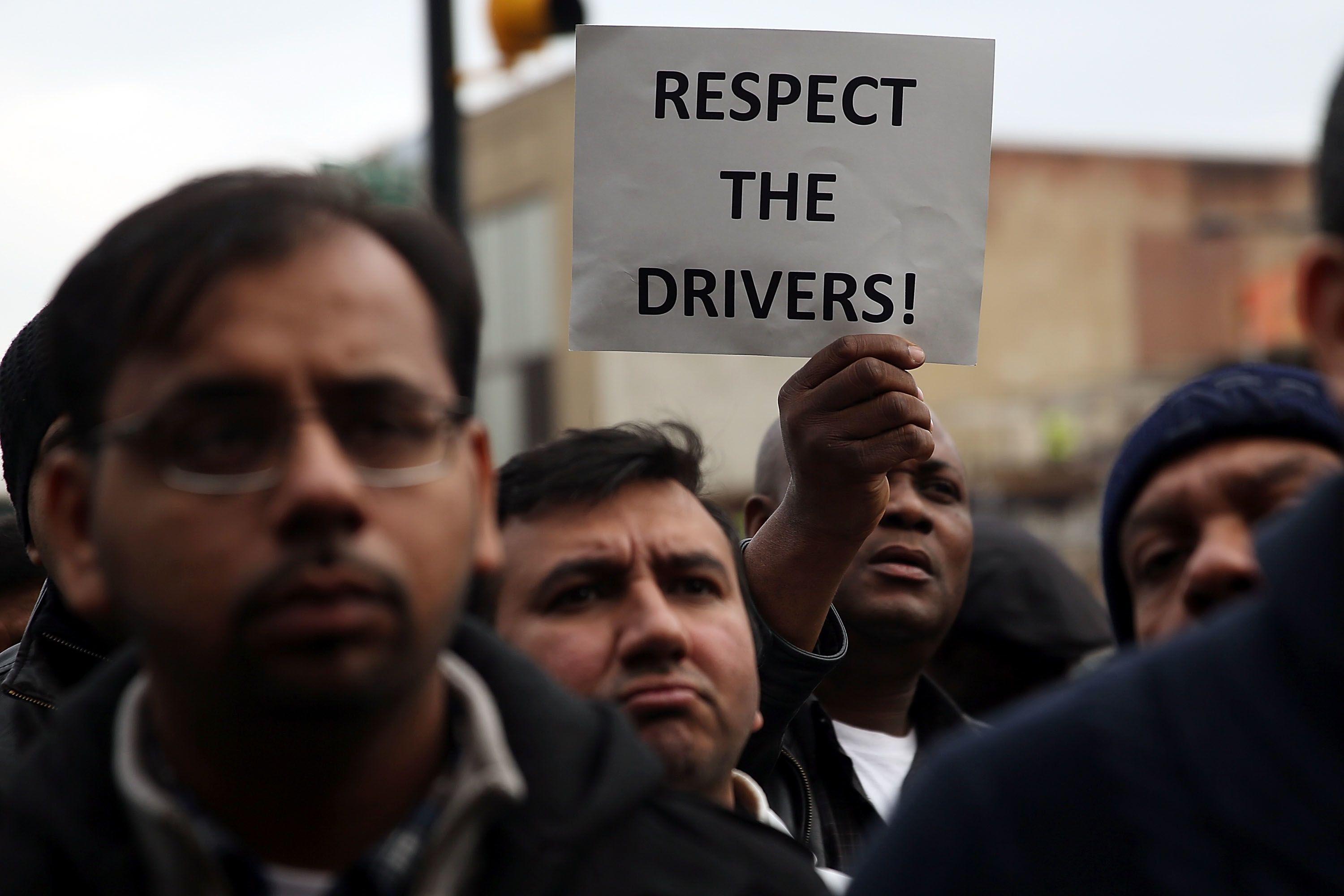 Uber drivers protest the company’s recent fare cuts and go on strike in front of the car service’s New York offices on February 1, 2016.

Drivers for ride-hailing services Uber and Lyft are planning to turn off their apps Wednesday to protest low wages and other gripes.

The strike comes just two days ahead of Uber’s IPO, which is expected to be the largest among new tech stock debuts this year with an expected valuation of $80.53 billion to $91.51 billion on a fully diluted basis.

Drivers argue the road to both companies’ IPOs has been carried on the backs of workers whom Uber and Lyft have insisted for years are merely contractors. The debate is now reaching a boiling point as founders from both companies are set to get rich while drivers say they still aren’t paid enough while being denied access to full-employee benefits.

In New York City, drivers plan to strike for two hours during the morning rush hour to demand job security, livable wages and a guaranteed commission rate, according to a release from the New York Taxi Workers Alliance. In other U.S. cities, like Los Angeles, strikes are planned to last a full 24 hours, according to Rideshare Drivers United. Protests are reportedly expected in at least eight U.S. cities in total, including Chicago, Boston and Philadelphia.

In a statement, a Lyft spokesperson said, “Lyft drivers’ hourly earnings have increased over the last two years, and they have earned more than $10B on the Lyft platform. Over 75 percent drive less than 10 hours a week to supplement their existing jobs. On average, Lyft drivers earn over $20 per hour. We know that access to flexible, extra income makes a big difference for millions of people, and we’re constantly working to improve how we can best serve our driver community.”

An Uber spokesperson said in a statement,  “Drivers are at the heart of our service─we can’t succeed without them─and thousands of people come into work at Uber every day focused on how to make their experience better, on and off the road. Whether it’s more consistent earnings, stronger insurance protections or fully-funded four-year degrees for drivers or their families, we’ll continue working to improve the experience for and with drivers. “

Uber and Lyft both acknowledged in their IPO prospectuses that reclassifying its drivers as employees would negatively impact their businesses. That might be part of the reason both companies have included rewards for drivers who have played the most active role in building up their services as part of their IPOs. Drivers for either company who have completed 20,000 rides by a certain date earlier this year are eligible for a $10,000 bonus from Uber or Lyft. Other amounts are available to drivers at different tiers of activity.

So far, the services have not had to reclassify their workers despite threats from politicians and lawsuits. In 2018, the Ninth U.S. Circuit Court of Appeals nullified a decision in a lower court where Uber drivers had argued they should be deemed employees, saying a class action suit could not be brought due to Uber’s arbitration clause, The Verge reported.

But the companies have still had to deal with costly legal battles. Earlier this year, Uber agreed to pay $20 million to settle a class-action lawsuit brought by its drivers that claimed Uber dodged requirements to provide benefits and a minimum wage by classifying drivers as contractors, TechCrunch reported.

While Uber and Lyft are both dependent on drivers to fuel their core businesses, many analysts believe they are also their greatest burden. Both companies are working toward a future where drivers are a much smaller part of the picture for their businesses, relying instead of self-driving vehicles. Without drivers, both services would get to keep more of the revenue from each ride.

Watch: Here’s how Uber is pitching itself to investors