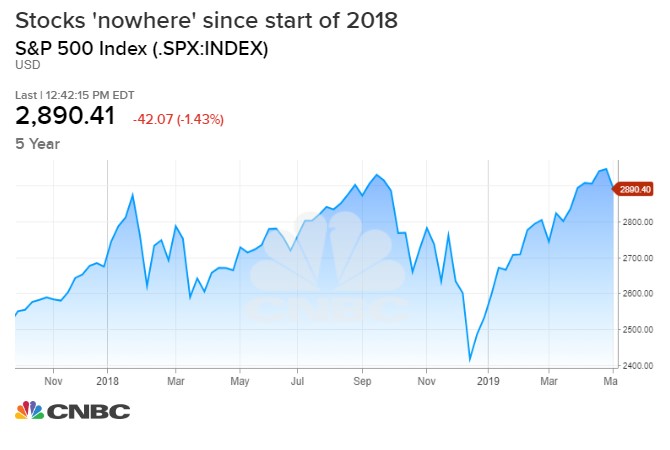 Jeffrey Gundlach, the head of investment firm DoubleLine, believes there’s a better than 50% chance President Donald Trump follows through on his threat to raise tariffs on China, further weighing on a stock market he believes is already in a weakened state.

“I think we’re going to keep seeing more tension and I think the 25% tariff bump is better than 50% chance” of happening, Gundlach told Scott Wapner on CNBC’s “Halftime Report” on Tuesday. “Both the premier of China and the president of the United States want to come across that they prevailed and didn’t give in.”

“I think you’ve got an irresistible force meeting an immovable object,” Gundlach added.

DoubleLine has more than $130 billion in assets under management.

If tariffs increase as scheduled on Friday, Gundlach thinks the U.S. stock market will sell-off further. The Dow Jones Industrial Average has fallen more than 460 points this week after Trump on Sunday threatened to add more tariffs on Chinese imports.

“It’s already happening, I think. The market obviously doesn’t want increased tariffs, so it’s been kind of reacting to that,” Gundlach said.

“I think that we’re in a late cycle and I think the market can only be termed by the way I look at evolution of market prices as a bear market,” Gundlach said. “The market hasn’t gone anywhere in 15 months.”

“People keep acting like this is some sort of locomotive that’s chugging along but the New York Stock Exchange Composite Index – which to me is the most important one because it’s the biggest – it peaked in January of 2018 and then couldn’t quite make it back to that peak in October and now it couldn’t quite get back to that October level and now it’s rolling over again,” Gundlach said.

Uber, Lyft drivers to go on strike over low wages and benefits
Endgame’ made so much money at box office so quickly
To Top
error: Content is protected !!