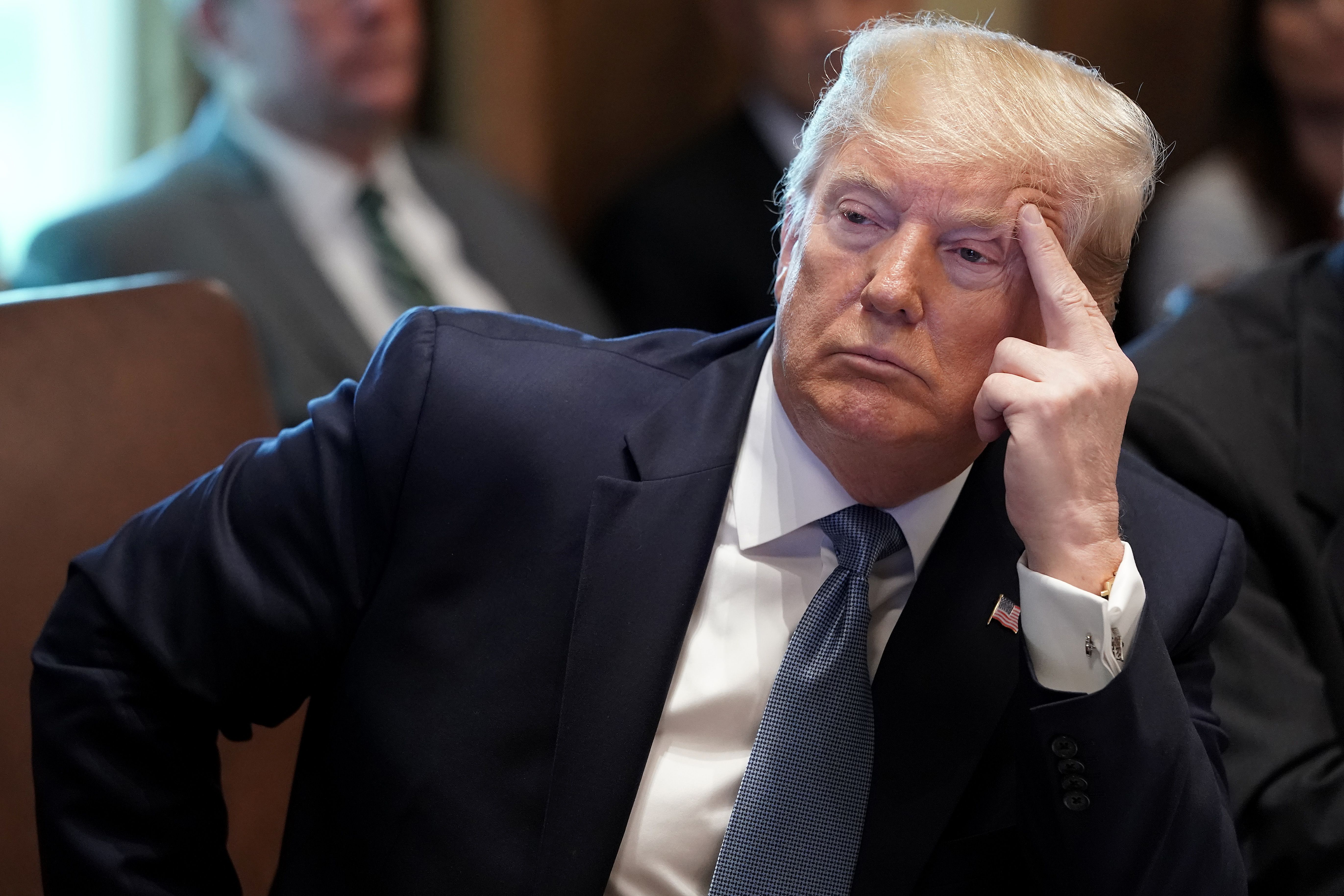 President Donald Trump during a cabinet meeting at the White House July 16, 2019 in Washington, DC.

U.S. airline executives left a meeting with President Donald Trump at the White House Thursday without securing a commitment to intervene in a long-running dispute over Middle Eastern air carriers, according to White House officials and people familiar with the meeting.

The private session in the Oval Office with executives from United Airlines, American Airlines, among others, highlighted tensions between the U.S. air carriers and the White House over steps taken by a Qatari competitor. The Doha-based airline serves the U.S. from Qatar but also has a minority stake in Air Italy, which has in recent years added routes to the U.S. from Milan. U.S. carriers have sought to limit the expansion of carriers which they argue receive unfair government support. The meeting came amid bruised feelings both at the White House and in the industry — although all participants sought to put a good face on the session after the fact.

The episode revealed that there are limits to the president’s generally protectionist approach to benefiting U.S. companies at the expense of their foreign competitors. In this case, Trump didn’t take action to benefit the American carriers — an outcome that was beneficial to the Qatari airline. Qatar is also proving a tricky piece in the dispute since it is a big consumer of U.S. goods. Earlier this month, Trump touted Qatar Airways’ purchase of five freighters made by Boeing and its use of General Electric engines to power new planes.

At issue is a dispute between U.S. carriers and Qatar Airways over what the large U.S. airlines see as as unfair government backing for their competitors in the Middle East.

Musicians perform next to the 25th unit of Boeing 787 Dreamliner received by Qatar Airways and dislayed at the Dubai Airshow on November 9, 2015 in the Gulf Emirate.

U.S. airline executives were “shocked” that state-owned airline Qatar Airways CEO Akbar Al Baker was also invited to the meeting, according to a person familiar with the meeting. White House trade advisor Peter Navarro also wasn’t too pleased that Al Baker was there, a senior White House official said.

“The president expressly wanted the Qatar CEO as he wanted a variety of perspectives, as he always does,” the official said.

For its part, the White House was upset that Delta’s CEO did not attend the session with Trump.

“The real story,” said a senior White House official, “is that Delta refused the invite. That didn’t help their cause.” The airline’s absence stuck with Trump who brought it up several times during the Oval Office session, according to a person familiar with the meeting.

At one point, Qatar Airways CEO Al Baker underscored the president’s point about Delta, noting that he had been willing to fly all the way from Qatar for the meeting, said the person familiar with the meeting.

A Delta spokesman says CEO Ed Bastian did not “refuse” to meet with the president, he was traveling.

“Ed unfortunately had some previously scheduled travel that he was unable to reschedule,” he said. “He is appreciative of opportunities to have on the past to discuss this important issue with the president and members of the administration. Delta remains 100% committed to leveling the playing field in international aviation.”

The president told U.S. carriers to go through the normal process of filing a complaint through federal regulators, according to a person familiar with the meeting.

“The outcome was to encourage the aggrieved U.S. carriers to use the mechanisms available in law to adjudicate their grievances,” a senior White House official said. “That outcome would have been the same without Qatar being there.”

American Airlines CEO Doug Parker and other executives were circumspect upon leaving the meeting Thursday.

The bottom line, according to the person familiar with the meeting, is that the US airlines left the session without getting what they wanted.

“The airlines wanted some action from the president, and they didn’t get it. It’s bureaucratic. This is not the action-oriented president that some were expecting,” that person said. The airlines, which couldn’t get a similar meeting with the Obama administration, “see this as a good start, and there’s a long road ahead,” the person said.

Netflix CEO Reed Hastings to depart Facebook board of directors