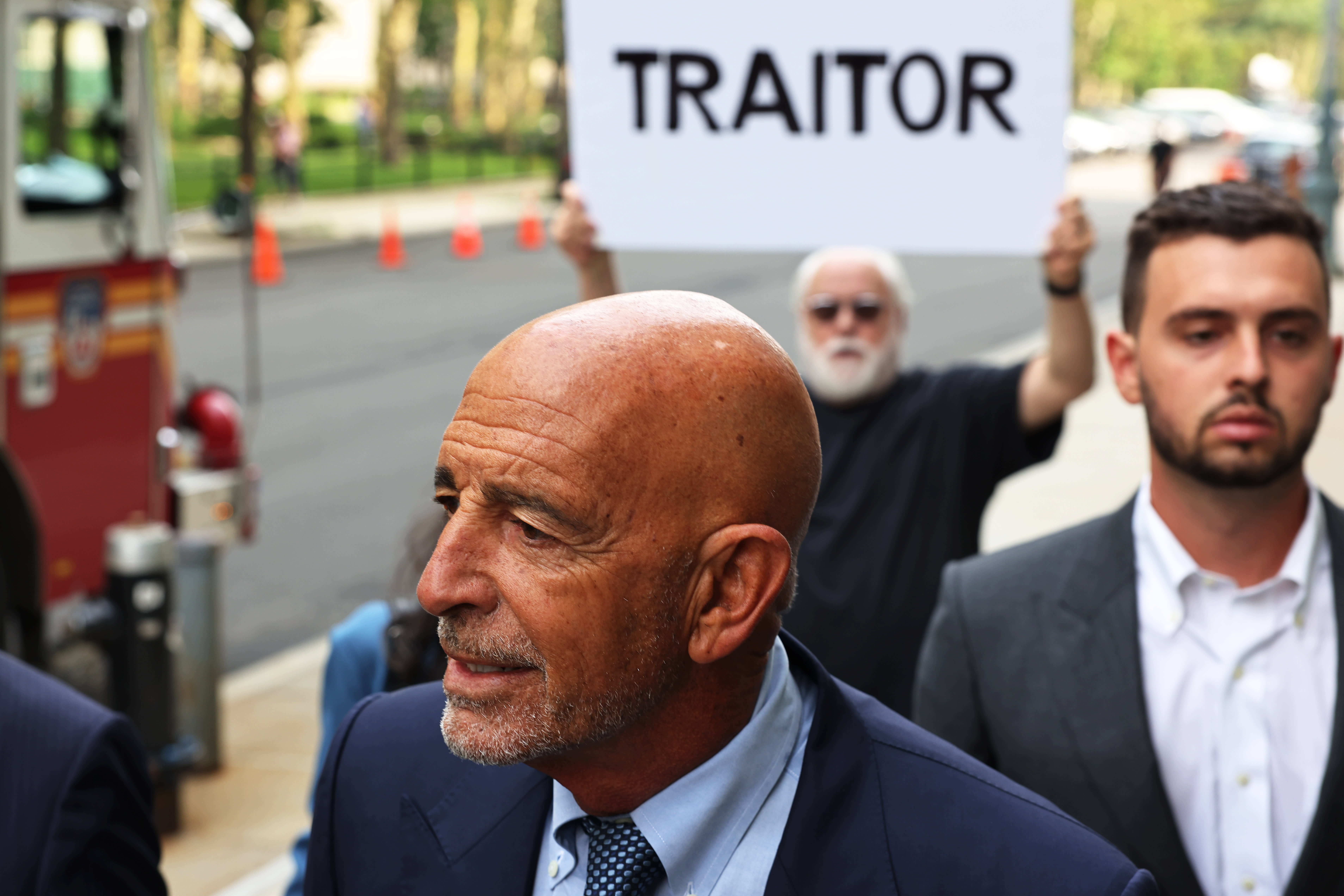 Thomas Barrack, a close adviser to former President Donald Trump and chair of his inaugural committee, arrives for a court appearance at the U.S. District Court of Eastern District of New York on July 26, 2021 in Downtown Brooklyn in New York City.Michael M. Santiago | Getty ImagesPrivate equity investor Thomas Barrack got the Paul Manafort-Roger Stone treatment when he showed up at federal court in New York on Monday for arraignment on charges of illegally lobbying his friend ex-President Donald Trump for the United Arab Emirates.The 74-year-old Barrack was greeted by a man hoisting a sign saying “Traitor” in big black letters he entered the courthouse in Brooklyn.That’s the same message — wielded by what appeared to be the same guy — that often greeted Trump’s 2016 campaign chief Manafort and his ally Stone, the controversial Republican political operative, during their own federal criminal cases, which all ended in convictions.Those convictions later were voided when Trump pardoned both men shortly before leaving office.Asked by a reporter how he would plead at this arraignment, Barrack replied, “Guys, I know you’re just doing your job — I’ll talk to you on the way out.”Barrack, who plans to plead not guilty in the case, had been jailed without bond until last Friday, when a federal judge ordered him released on a $250 million bond, one of the largest criminal bails in history.That bond was secured by $5 million cash, more than $21 million in securities, and Barrack’s home in California.Since his release, Barrack has had to stay, per the judge’s order, in the company of his lawyers. He also was fitted with an electronic bracelet, which has GPS monitoring.Prosecutors in a detention memo last week had raised concerns that Barrack might flee to avoid the charges, given his holding of Lebanese citizenship and his access to a private jet.Former Trump campaign manager Paul Manafort (2nd R) arrives with his wife Kathleen Manafort (R) at the Albert V. Bryan U.S. Courthouse for an arraignment hearing as a protester holds up a sign March 8, 2018 in Alexandria, Virginia. Alex Wong | Getty ImagesCNBC PoliticsRead more of CNBC’s politics coverage:Barrack, who never registered with the American government as an agent for the oil-rich UAE, is additionally charged with obstruction of justice and making multiple false statements during a June 2019 interview with federal law enforcement agents.Prosecutors have said that Barrack, at the same time he was promoting UAE’s interests with the Trump administration, was informally advising U.S. officials on Middle East policy, and was seeking appointment to a senior role in the U.S. government, including as special envoy to the Middle East.The indictment also charges another man, UAE national Rashid Sultan Rashid Al Malik Alshahhi, 43, who remains at large.Roger Stone, a longtime adviser to President Donald Trump, arrives at the Prettyman United States Courthouse before facing charges from Special Counsel Robert Mueller that he lied to Congress and engaged in witness tampering January 29, 2019 in Washington, DC. A self-described ‘political dirty-trickster,’ Stone said he has been falsely accused and will plead ‘not guilty.’Chip Somodevilla | Getty ImagesLast Friday, Falcon Acquisition, a special purpose acquisition company backed by Barrack, withdrew its registration statement with the Securities and Exchange Commission, saying it was abandoning planned transactions.The transactions had included an initial public offering of 25 million shares to raise $250 million for Falcon Acquisition, which was formed by Barrack’s family office Falcon Peak, and TI Capital. The SPAC had planned to list its shares on the New York Stock Exchange.Barrack stepped down in 2020 as CEO of Colony Capital, a private equity firm he founded. He resigned as the firm’s executive chairman in April.

Former Virgin Galactic CEO to launch on the company’s next spaceflight test
Global shipping industry disrupted again, this time by floods in Europe and China
To Top
error: Content is protected !!