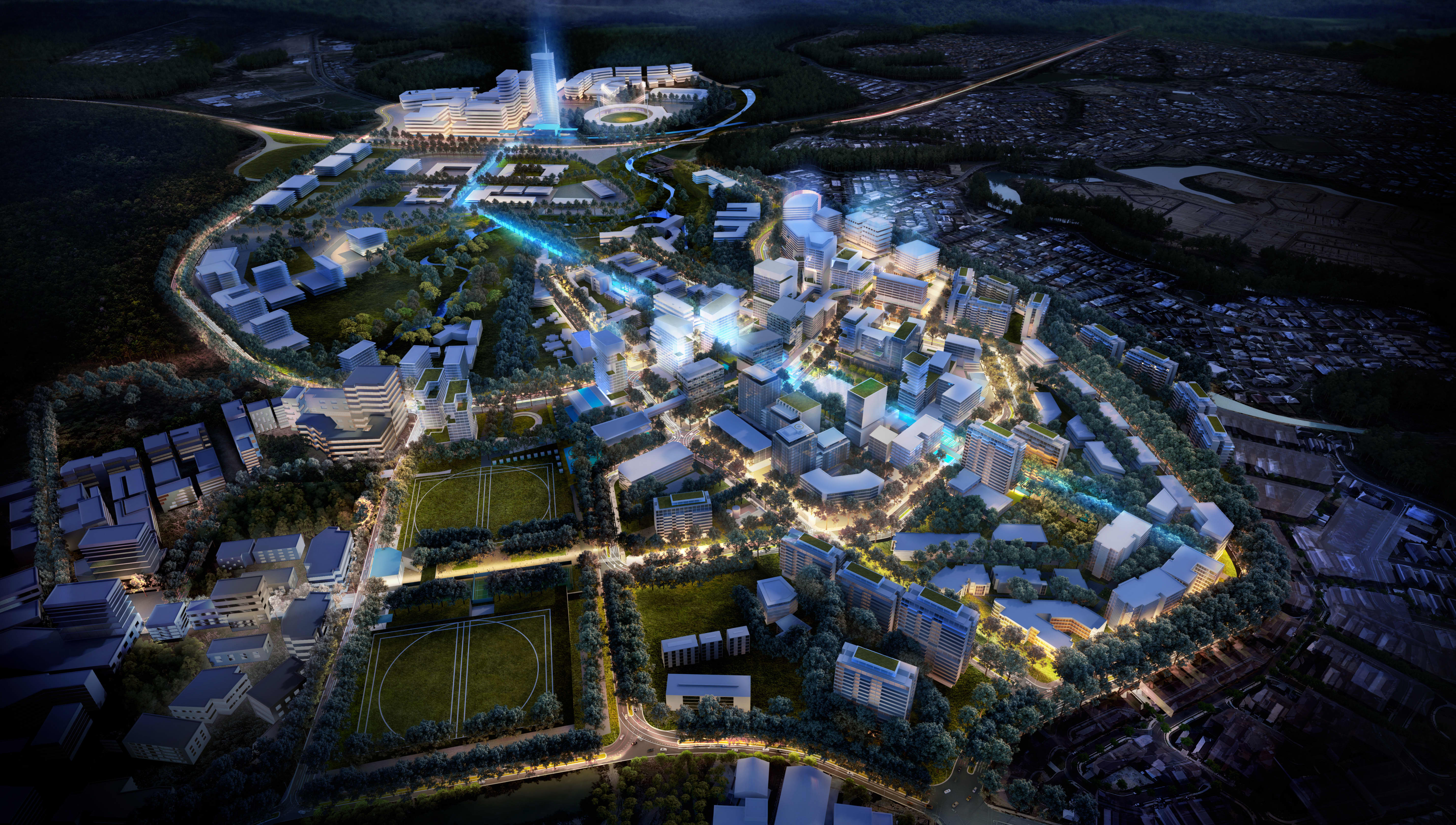 A computer generated aerial view of Greater Springfield near Brisbane, Australia.Springfield City GroupTravel up the sunny shores of Australia’s Gold Coast, 25 kilometers outside of Brisbane, and you’ll find Greater Springfield, a city that’s different by design.You may never have heard of it. Unsurprising; the city is not yet 30 years old. But that isn’t holding it back. In a few years, it could be the next Silicon Valley, says developer Springfield City Group (SCG).”The world has learned a lot from Silicon Valley,” founder Maha Sinnathamby told CNBC. “We said: that’s 85 years old. Let’s design the latest version.”Sinnathamby is the brains behind Greater Springfield, Australia’s only privately built city and its first masterplanned city since the capital Canberra was created more than a century ago. The octogenarian property tycoon — who spent a 50-year career creating residential and commercial developments across Australia — said his latest project, like its inspiration Silicon Valley, is about creating a modern business hub designed around technology, education and health care.We’re trying to attract the Microsofts and Googles of the world.Maha Sinnathambyfounder and chairman, Springfield City GroupAnd now, he’s looking for big name companies to help him realize the next stage of his estimated $68 billion vision.”We’re trying to attract the Microsofts and Googles of the world,” said Sinnathamby, noting that the group is currently in discussions with one multinational tech company.An innovation hub for Asia PacificDeveloped on a 7,000 acre plot of land purchased for $6.1 million, Greater Springfield — the world’s tenth largest masterplanned community — is already a living, breathing city much changed from the disused forestry operation Sinnathamby acquired in 1992.Home today to 46,000 residents, 16,500 homes, 11 schools, a national university campus, a hospital and a railway line connecting it to neighboring Brisbane, Sinnathamby said the city is so far 25% complete after receiving $15 billion in private and state funding.But more businesses are needed to make it into a true innovation hub within Asia-Pacific, and hit its targets to triple the population and create 52,000 new jobs by 2030. To date, 20,000 jobs have been directly and indirectly created under the project, SCG said.”We want to turbocharge it with highly respectable companies, who are highly talented and who want to make a lot of profit,” said Sinnathamby. “We can’t do this massive job on our own.”Greater Springfield is the first privately built city in Australia and the world’s tenth largest master planned community.Springfield City GroupThe bait, as Sinnathamby puts it, is the city’s greenfield location, which, like Silicon Valley, offers companies a space to get experimental. That includes offering purpose-built facilities in which large companies and smaller start-ups can innovate. Meantime, its “living lab” provides room to test new technologies related to smart work, living, learning and play.Engie SA is one business currently testing the waters. In 2018, the French utility company signed a 50-year strategic alliance to make Greater Springfield Australia’s first net-zero energy city as it aims to showcase its green credentials.By 2038, Engie plans for the city to generate more energy than it consumes by focusing on five key pillars: urban planning, mobility, buildings, energy and technology. Increasing electric vehicle infrastructure, prioritizing public transport, constructing environmentally friendly buildings, introducing solar panels to all available rooftops, and retaining 30% of the region’s landholding for open green space are among the various methods it will use to achieve this.Elsewhere, earlier this month Sydney start-up Lavo chose Greater Springfield as the manufacturing hub for its “world first” 30-year hydrogen battery set said to be able to power a home for two days with a single charge.Developing a knowledge workforceThe new business operations will sit within Greater Springfield’s so-called Knowledge Precinct, the city’s primary employment hub designed to attract knowledge workers with skills related to its core pillars: technology, education and health care.Health City, a 128 acre health precinct developed with Harvard Medical International, will provide top health care as well as thousands of medical jobs, said Sinnathamby. Meanwhile, the city’s expanding education network, including two new universities and a focus on indigenous communities, will nurture the new generation of professionals, he said.I want partners to come who are committed to this vision.Maha Sinnathambyfounder and chairman, Springfield City Group”We’re very closely committed to try and make sure this knowledge precinct is a gift to not only Australia but perhaps to the world,” said Sinnathamby.Still, the timing of the project cannot be ignored. The pandemic has led many people to rethink the appeal of major business hubs, with some estimates suggesting as many as 53% of U.S. tech and media workers have already left or plan to leave behind big cities’ rising living costs.Sinnathamby, however, is confident his vision for Australia’s future city will hold out — and perhaps even provide a blueprint for others. With its focus on emerging industries, Greater Springfield does appear to have weathered the pandemic better than some others place, recording an unemployment rate of 3.9% compared to Queensland’s statewide level of 5.9%.”I’m committed to this as nation building project,” said Sinnathamby. “Now, I want partners to come who are committed to this vision.”