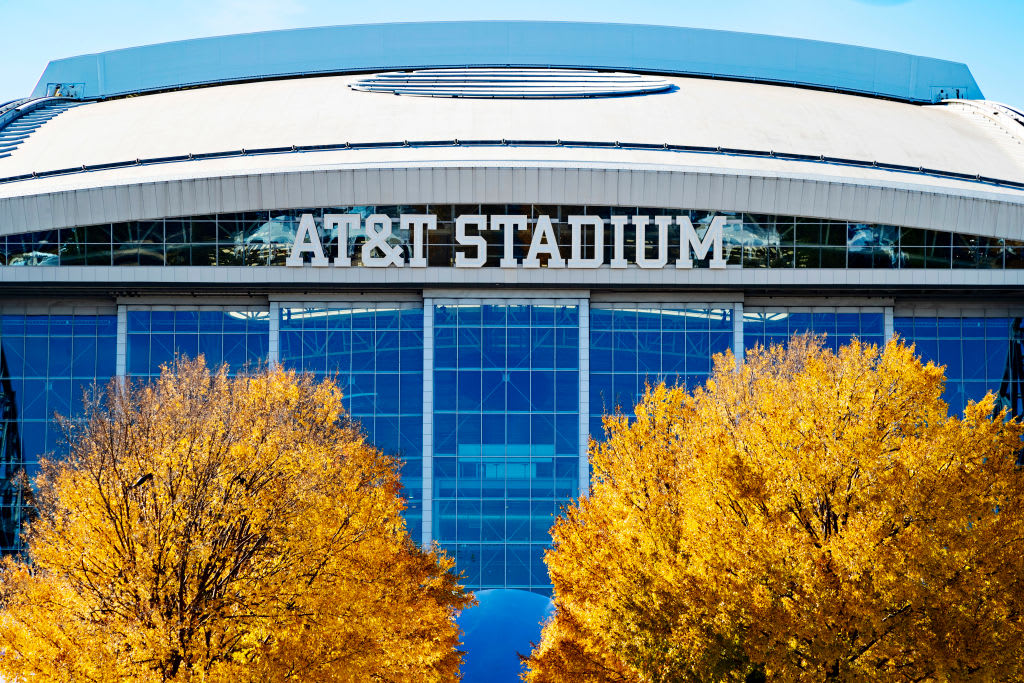 Exterior of AT&T Stadium of the Dallas Cowboys before a game against the Washington Redskins at AT&T Stadium on November 22, 2018 in Arlington, Texas.Wesley Hitt | Getty ImagesAlthough Major League Baseball switched its postseason to a multiple-city bubble environment in an effort to complete its Covid-19 shortened season without more delays, it seems unlikely the National Football League will copy.Following a two-hour meeting with NFL team owners and club representatives on Tuesday, NFL commissioner Roger Goodell said the league has “flexibility” to continue shuffling dates of postponed games leading up to the Super Bowl, which is still scheduled for Feb. 7 in Tampa Bay.But the NFL doesn’t plan to use alternative locations to finish its season — although plans could change.”We evaluate as many different areas that we think will at least be helpful,” Goodell said. “Fortunately, we haven’t had to use many of the things we’ve discussed and thought about.”Ever since the pandemic first shut down sports in March, the idea of a bubble environment, where players are isolated from the outside world, has been floated as a way to resume play while minimizing risk. New Orleans Saints head coach Sean Payton is credited with the idea, which has worked in other leagues, most notably the National Basketball Association.MLB officials expressed a desire to be done with its postseason before the Nov. 3 presidential election, which would be difficult with another outbreak. So it installed a bubble plan for the post-season, and moved the World Series to Texas with limited fans.Now that the NFL is enduring its outbreak own following positive tests from the Tennessee Titans, the chatter of a football bubble has reappeared, with The Athletic mentioning Dallas and Los Angeles as potential locations.Asked about the reports, Troy Vincent, NFL executive vice president of football operations, said the decision would be medical-driven and deferred to the league’s chief medical officer, Dr. Allen Sills.The NFL is keeping its options open, according to Sills, but right now the league isn’t in favor of adding bubbles.Sills said bubbles are “not foolproof” with stopping infections, as they would still be open to outside service workers. And Sills emphasized the emotional toll on players isolated from families, especially during the holidays.”That’s a significant stress point, and I think we have to acknowledge that is just as much of a health and safety consideration as this Covid-19 infection,” Sills said.The NFL would still need to seek permission from the National Football League Players Association before taking any bubble action, and that support too seems unlikely. Players have voiced frustrations about the testing.But if Covid-19 numbers continue to increase, both parties may need to be more open to the idea, especially with a spike in NFL-related cases. The most recent testing period, which ended Oct. 10, revealed 15 new positives.Sills said the league is “focused on compliance with our protocols,” pointing out that it recently added game days to its daily testing regimen. Sills said the protocols are effective and have found roughly 100 positive cases among players and staff, but he acknowledged the lag time of receiving accurate tests, which provides an open window for potential spread.”We just have to recognize that testing is always going to have some of its limitations,” he said.In an interview with CNBC, Gil Fried, an expert on stadium safety and risk management and professor at the University of New Haven, said adding a bubble is an “easier way to monitor what is going on.” But Fried also expressed concern about the quality of play due to the mental part of isolated environments.”Every league is trying to figure out what is the best way to move forward knowing that we are human beings and human beings have all of our flaws,” Fried said. “We can make as many rules as we want – have distance, monitoring devices that we have to wear, all those types of things, but people are people.”Drew Brees #9 of the New Orleans Saints scrambles with the ball against the Los Angeles Chargers during their NFL game at Mercedes-Benz Superdome on October 12, 2020 in New Orleans, Louisiana.Chris Graythen | Getty ImagesNo concern for ratingsOn the conference call, Goodell also discussed the NFL’s TV viewership declines this season.Monday’s ESPN telecast of the Saints-LA Chargers contest averaged 10.6 million viewers, a slight decline from last year’s Week 5 contest between the Cleveland Browns and San Francisco 49ers (11.1 million). The game peaked in the first half, averaging 11.8 million viewers from 9:15 p.m. to 9:30 p.m. ET.Through six games, the 2020 Monday Night Football franchise is averaging 11.24 million viewers, which ESPN says “remains on pace” with last season’s viewership average of 11.26 million.Sports leagues across the board continue to see ratings hit with consumption habits changing and lack of fans in attendance due to the pandemic.  Though opinions vary as to whether social movements truly impact ratings, some sports viewers are turned off by leagues’ stance on heightening awareness around social injustices.But Goodell said he “couldn’t be more pleased” with the league’s TV numbers in a “changing environment” with how fans watch NFL games.”Our network partners and advertisers are really pleased where we are,” Goodell said, making sure to note the NFL had 18 of the top 20 programs in television going into this weekend.”I think what we’re doing and where our numbers demonstrate is where putting distance between us and every other programming — sports and entertainment included.”

WHO clarifies remarks on asymptomatic spread