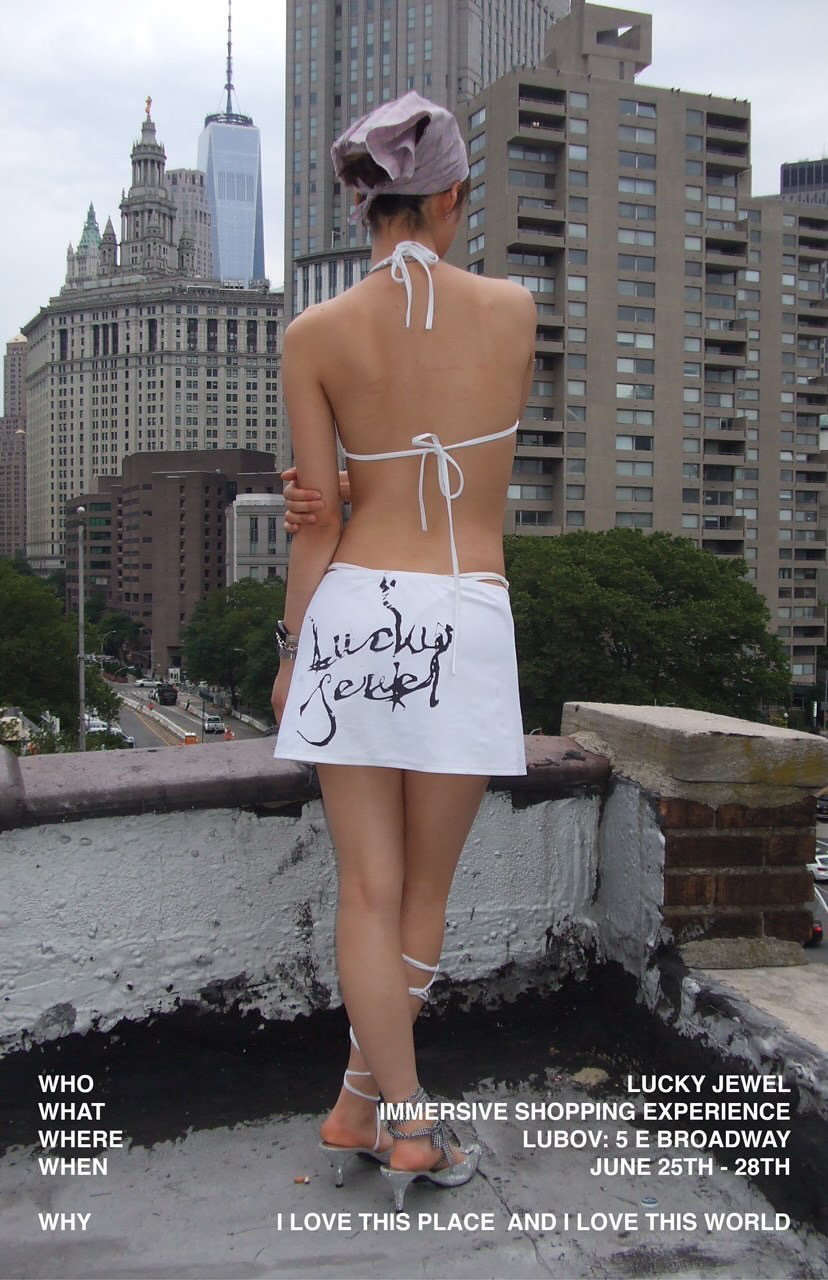 Lucky Jewel, an art-and-craft collective that originated in Chicago, hosted its first New York show at the end of June in the form of “Lucky Jewel IV: I Love This Place and I Love This World,” an exhibition that showcased the work of 33 artists assembled for a curated shopping experience over the course of just one weekend at the downtown gallery Lubov NYC. Pieces were scattered across the space, with bags hung from the ceiling and clotheslines decorated with pom-poms supporting makeshift garments like bikinis and skirts in a show that blurred the boundaries that typically separate the retail experience from the gallery experience, not to mention the lines between art and craft. Shay Galla, a fashion designer and a member of the collective, described it simply: “At Lucky Jewel, you get to showcase your work and then the audience gets to bring it home.”

Students from the School of the Art Institute of Chicago, Olive Woodward,, Ramona Beattie and Holly Richwine, along with Vivian Xu of Northwestern, began hosting Lucky Jewel shows some three years ago with inspiration from their teacher Mindy Rose Schwartz, an artist who taught a class called “Extreme Craft.” At the underground event venue/living space known as Laura, the students hosted dinner parties that would later turn into opportunities to show work and to buy and sell pieces from classmates and others associated with the alternative music and art scene of Chicago. This year, Shay Galla, Mimi Bahk, Olive Woodward, and Lola Dement Meyers—all former SAIC students or past Lucky Jewel members—staged the first New York show after leaving Chicago and moving to the city.
The offerings at Lucky Jewel exhibitions have changed as influences from time and place have evolved. Chicago iterations have displayed a lot of industrial-inspired work often softened with bits of fabric. As Lucky Jewel shifted to New York, the sensibilities changed.

“It was like a collective consciousness—everyone used the same color: orange,” Galla said. Fellow collective member Mimi Bahk chimed in: “Of course, we’re all united by the great platform: Instagram.”
The aesthetic that united the show at Lubov was hard to pin down. The group agreed it was not “cottagecore” or “swampfairy,” two very internet-based aesthetic categories that encompass fashion and lifestyle choices of all kinds. Galla suggested that the similarity of the styles comes from the way the pieces are made: slowly, and often with found materials. “Sentimentality and time can make something feel luxurious, even if it’s from off the street,” she said, while noting that Lucky Jewel shows share that characteristic. “The events are always short, ephemeral. Putting all that time and energy into something that’s so fleeting? That’s decadence.”

Bahk added that what you see at one show will never be what you’ll see at the next. “Lucky Jewel is about shapeshifting,” she said.
That’s certainly true for the creators who made work outside of their usual disciplines. Tattoo artist Daniel Stroh offered handcrafted utensils for the event. Ceramicist Lori-May Orillo provided some leather goods, as well as cake, which she cut with a saw at the reception. Painter Astrid Terrazas made candleholders and necklaces. The only parameters that the Lucky Jewel curators gave was that the pieces they showed should “at least hint” at being useful.
The show also functioned as a way to offer work at more accessible prices. “It felt really good that we could price things more affordably because I knew my friends were going and I wanted it to be more accessible,” Terrazas told ARTnews. “I feel like the art world can get so overinflated.”
While the show took place within a gallery setting, the ethics of the Lucky Jewel collective set it apart. The artists involved with Lucky Jewel aim to avoid the fetishization of work that leads to astronomical prices and creative compromises. In the context of Lucky Jewel, artists have the opportunity to create one-of-a-kind pieces that are meant to be used and are priced accordingly. And even though craft has become increasingly popular in recent years within the art world, Lucky Jewel pieces haven’t strayed from the core ethics of craft: utility and community.
Lucky Jewel provides an escape from the often stifling expectations of the rarefied art world. Bahk said the collective gives her space to create without boundaries. A second year graduate student at Columbia’s School of the Arts focusing on sculpture, she told ARTnews, “The climate in the art world is very conceptual. You have to have all these reasons for making something. But craft comes from a gut feeling, because it’s beautiful. If art school makes this boundary between [fine art and craft], Lucky Jewel blurs it.”

Brandon Morris and Stephanie Blackburn make up the two halves of Guardian Angel School, a collaborative lamp-making project featured in the show. Both fashion students at the Parsons School of Design, they began working together last August. Blackburn told ARTnews, “We were both frustrated with the parameters of fashion and our programs at school, so we wanted to make something while using materials and skills we were familiar with.”
Morris and Blackburn meet every Sunday to eat, hang out, and make lamps that are whimsical and inspired by video games, rococo aesthetics, and witch hats. The pair exhibited their pieces at the Lucky Jewel exhibition (and also have a show at the artist-run space Gern en Regalia through August 8). But the opportunity to sell their work, Morris said, was just an added bonus. “We like making stuff even if we get zero dollars from it,” he said. “We both have that mindset like, Fuck it—let’s just make something.”