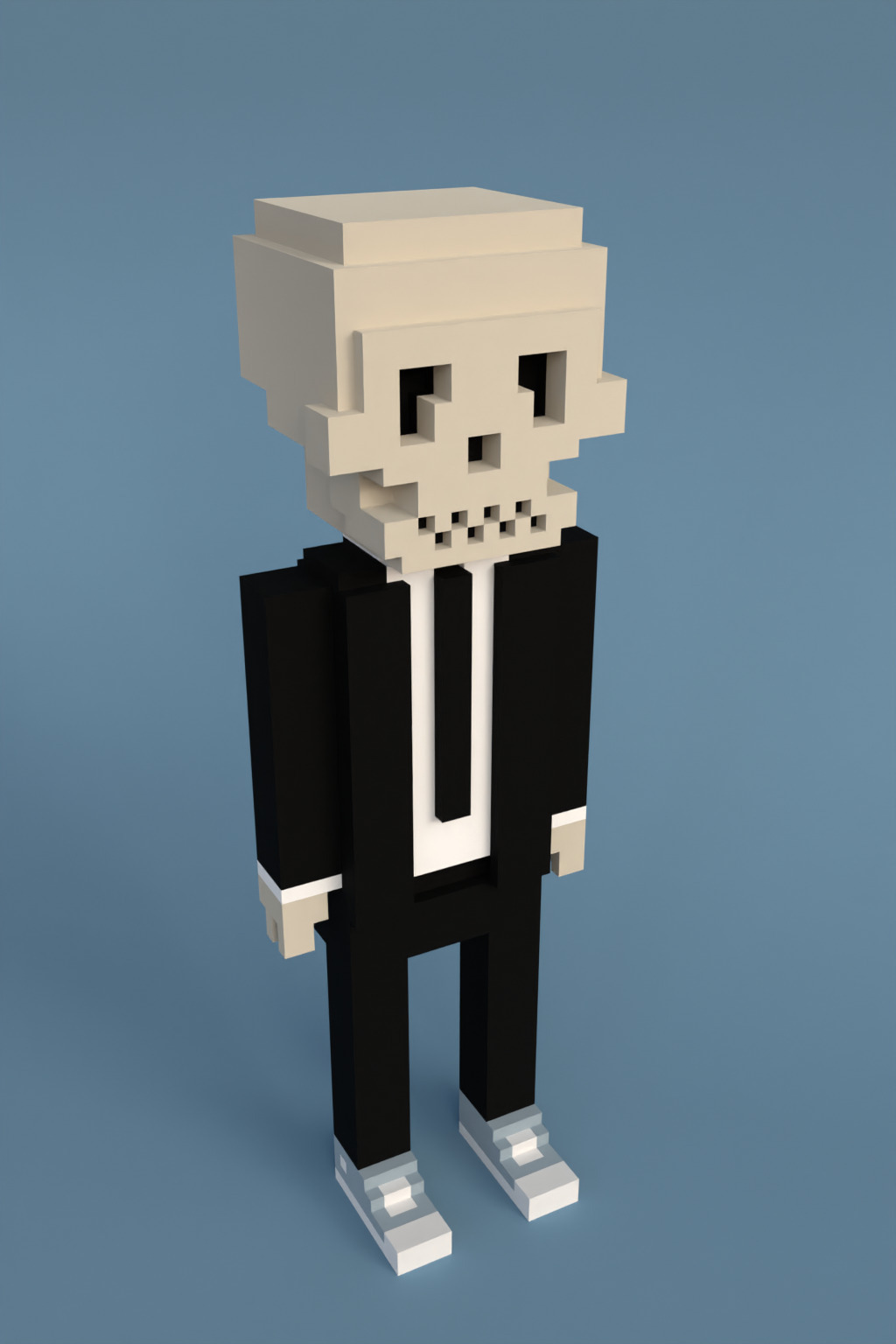 Some of the first NFTs ever made were a series of PFPs, or profile pics designed to be used as avatars for social media accounts. Among the first in the subgenre were the “CryptoPunks,” which were created by Larva Lab founders Matt Hall and John Watkinson starting in 2017. Their 10,000 algorithmically generated portraits of punks come in the super small size of 24 by 24 pixels, with ultra-rare alien and zombie types popping up a handful of times. When Hall and Watkinson first created “CryptoPunks,” their gave their NFTs away for free—anyone with an Ethereum wallet could claim one. During the NFT boom of early 2021, the Punks quickly increased in value. In March, CryptoPunk #7804, one of nine “alien” types, sold for $7.57 million. Blue-chip auction houses quickly took note. In May, Christie’s sold a bundle of nine Punks for just under $17 million. In June, Sotheby’s sold CryptoPunk #7523, an alien type sporting a mask, beanie, and earring, for more than $11.7 million to a buyer who goes by the name Sillytuna.

In the first half of this year, the Punks stood out as the only PFP project available on the secondary market during a short-lived period when buyers were more focused on digital artworks and sports collectibles. But by the second quarter of 2021, PFP projects would be key in keeping the NFT market afloat, with popular projects like Bored Ape Yacht Club (BAYC), Meebits (another Larva Labs project), Pudgy Penguins, and others initiating manic buying cycles with each drop. Christie’s has already put together an online-only sale exclusively focusing on PFP NFTs.
PFP projects differ from most NFTs in a few key respects. PFP initiatives tend to involve the drop of thousands of NFTs at once, all algorithmically put together using a fixed set of data. In that way, they can be considered part of a larger series, unlike most NFTs, which exist as one-off digital artworks. PFP NFTs also behave more like traditional collectibles. In combining the thrill of gambling on stocks with the pleasures of creating a digital persona, PFP NFTs could reshape how works made in the medium are bought and made.
Franky Aguilar, the creator of the massively popular “Sup Ducks” series, said that because of the way PFP projects are generated, they spark a loyal base of buyers. He compared the production of PFPs to the way television networks grow a community of fans for their series, saying, “It’s similar to how people get attached to characters in TV shows or cartoons. They associate a personality with that character that reminds them of themselves or how they want to be.”

Aguilar began making PFPs this past June when he saw how successful others had been at producing similar works. He took a character he’d been drawing for a few years—a cartoon duck—and started adding different attributes and accessories. With the help of a developer, an algorithm was created that would layer different attributes, randomly selecting a head shape, then an eye shape, with variances in skin color, mouths, accessories, and so on being added later on. The algorithm assures that no two are alike while also creating coveted rare variances. A month later he dropped his collection.
Within 48 hours of their release, the “Sup Ducks” sold out, bringing in more than $1.5 million. All of them were quickly flipped for many times their original price; Aguilar got a cut of the royalties with each resale. According to Aguilar, this is good business. “Procedurally generated artwork is a very easy way to generate 10,000 unique images,” he said.
Whether or not one’s project will do well, though, is hard to gauge. In Aguilar’s case, he had had a strong presence online for years—his TikTok, which features time-lapse videos of Aguilar painting, has amassed more than 150,000 followers. This large following, paired with his presence as an NFT collector, gave his project the needed boost to attract massive buy-in.
PFP projects like “Bored Apes” and “SupDucks” in particular tap into a nostalgic aesthetic, drawing on the style and humor of shows that used to air on Adult Swim in the ’90s and ’00s, when their creators—and the works’ buyers—were still kids. Yet these projects represent something more than just Pokémon card trading for adults—there’s a lot more money at stake. Collectors often look to NFT gurus on Twitter for investment advice. Not only are these people expected to predict projects that will do well on the market, they tend to make particular projects successful by plucking them out of obscurity.

That’s what happened to Berk Özdemir. For his “Bastard GAN Punks” series, Özdemir fed a generative adversarial network (or a GAN, a machine learning program) all 10,000 “CryptoPunks” that Berk had ripped from the Larva Labs website. The GAN spat out monstrous mashups of the Punks with their features corrupted or lost completely. The second time Özdemir fed information into the GAN, bright colors, lines of static, abstract forms, and misplaced pixels resulted, captioned with GAN generated emo lyrics that are only partially intelligible—and oddly poetic. Ultimately, Özdemir’s PFPs were messy in a way that was more punk than the original Punks.
The series was noticed by Roham Gharegozlou, CEO of Dapper Labs, the company behind major NFT successes CryptoKitties and NBA Top Shots. “If big people in the space start pushing a project it usually goes very well,” Özdemir said. His project quickly sold out after just one retweet from Gharegozlou.
No PFP project, or endorsement of it, is a guarantee. 8ncient Gardener, an NFT expert who is currently paying his rent by investing and selling in PFP NFTs, said, “I’ve bought plenty of dead NFT projects—I have enough for a small graveyard of NFTs.” These failures came in handy when he decided to launch his own PFP project. Along with his similarly anonymous teammates—designer Eternal Caretaker and developer Seed Meister—Gardener crafted an initiative known as the ZENFT Garden Society in 2021. It went on to produce 8,888 3D-rendered bonsai trees, attracting hype from buyers while encouraging them to hold onto their assets, even as tempting offers came their way, thereby increasing their value.
“The [NFT] space thrives on FOMO,” Gardener said. “There was a project recently that had a failure and you couldn’t actually buy them on their website, and that drove people crazy and they found a way to buy them and it sold out really quickly.”
Other than generating this kind of scarcity, there are other ways to entice buyers. Most PFP projects offer the same basic perks: access to an exclusive collector’s channel on messaging sites like Discord, full commercial rights to the NFT, and promises that holders will receive airdrops of exclusive content that they can leverage into merchandise or sell. In essence, a successful PFP project is the beginning of a brand that collectors can buy into.
ZENFT offers all this but has set itself apart even more by making the series available in augmented and virtual reality, a first in the PFP NFT space. Caretaker, an artist who has worked in design for video games and other NFT projects, like Crypto Kitties, carefully constructed the bonsai trees, adding flowers, birds and other imagery that draws on Hokusai’s woodblock prints. “There was a lot of quality control making sure each of the 8,000 looked good, making sure certain attributes didn’t spawn together,” Caretaker said.
It took weeks to render everything, using all the computers the team had at their disposal. Yet this is a side project for Caretaker, who hasn’t told anyone in his professional or personal life about the project. “The profits that I make from this are to help me break free from the cycle of being tied to commercial artwork so I can push the ideas that I’ve been developing over the years into actualization,” he said. “I don’t need to brag to anybody about that.”
The bonsais sold out in less than an hour on June 1, generating more than $2 million for the team. Since then the team has been hard at work creating new offerings for their holders, with Gardener fostering utility and community where he can.
“Sometimes I feel like I’m building a Costco membership,” Gardener said. “Like, how do we make having a bonsai be one of the best things for you to hold in your NFT wallet?”