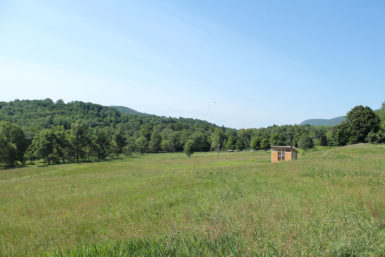 Beginning in June, a handful of people will temporarily be able to call the sprawling, verdant grounds of the Storm King Art Center in New Windsor, New York, home.

In tandem with Shandaken Projects, the sculpture paradise has announced the 15 artists selected for the annual Shandaken: Storm King residency program, which awards artists housing and studio space from June 3 through September 22.

“Each year’s group of residents approaches Storm King in new and innovative ways, and every individual adds to our community,” said Storm King senior curator, Nora Lawrence, who served on the selection panel for the program, in a release. “We are thrilled to continue supporting artists through this partnership.” This is the program’s fifth anniversary.

The other members of the selection committee were Kenyon Adams, director of the Louis Armstrong House Museum in Queens, New York; artist and residency alumna Ellie Krakow; and Nicholas Weist, founding director of Shandaken Projects.

Alex Da Corte Will Be in Residence at Wexner Center -ARTnews
Here’s the Contributor List for the 2019 Chicago Architecture Biennial -ARTnews
To Top
error: Content is protected !!