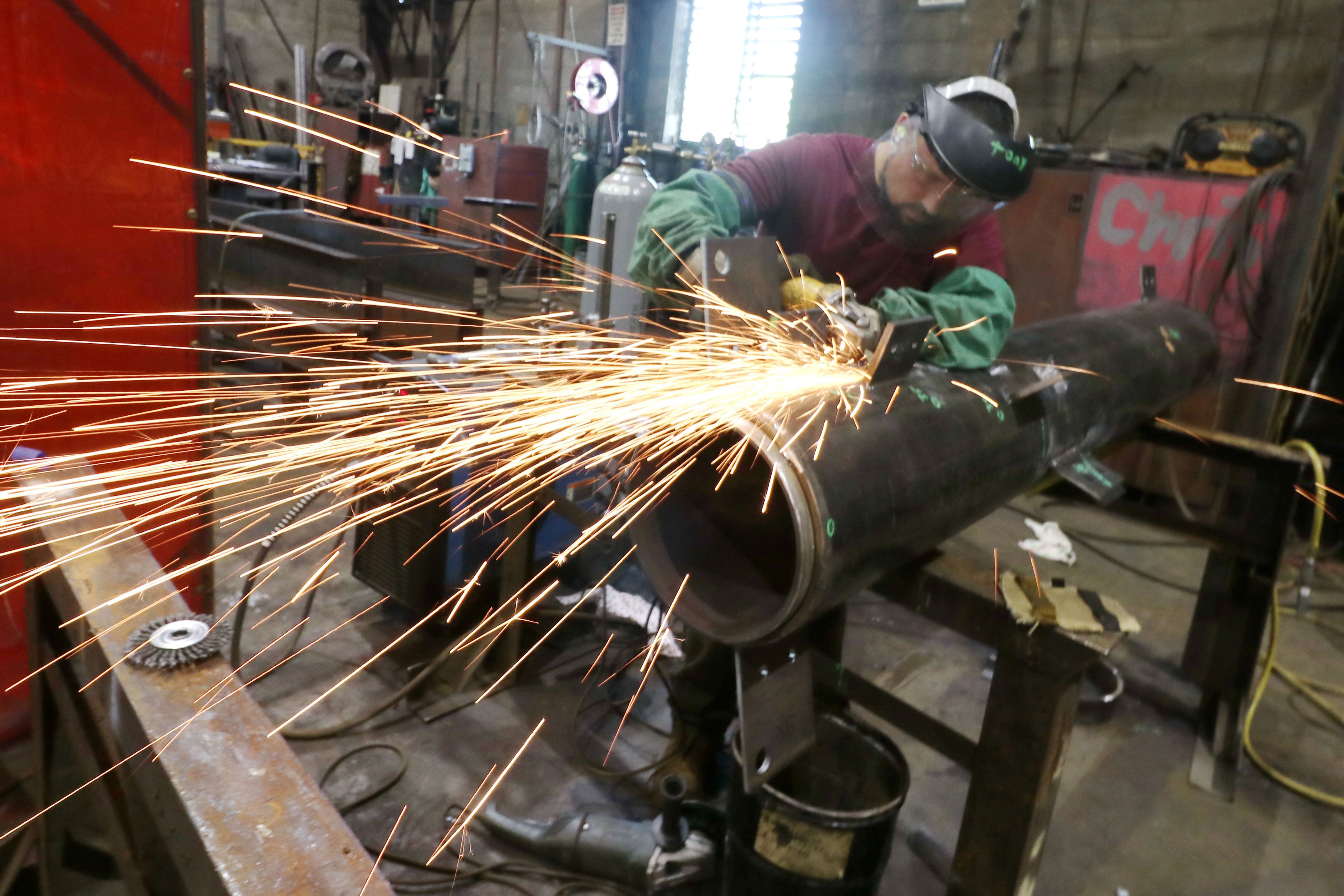 A man using an angle grinder on a steel piece at a metal fabrication company on August 7, 2018 in Orange County, New York.

The world’s largest steel corporations are not reducing emissions at the rate required to keep global warming below 2 degrees Celsius, a failure that on average puts 14% of the companies’ potential value at risk, according to a new analysis of corporate earnings profiles.

The 20 companies, which together represent 30% of global steel production, are currently expected to reduce emissions by less than 50% by 2050, falling behind the 65% reduction standard set by the International Energy Agency.

“Steel represents the most emissions-intensive industry — it’s a huge footprint,” said Luke Fletcher, a senior analyst at CDP, the international nonprofit that wrote the new report and works with companies to disclose financial risks of climate change on their bottom line.

The report illustrates the failure of polluting corporations to keep up with climate regulations and the financial losses they could suffer as carbon prices rise and the planet warms.

For decades, the steel sector has produced essential metal for construction, cars and food cans. However, it’s also responsible for 7% to 9% of all direct fossil fuel emissions, according to the World Steel Association, and is currently the largest industrial source of climate pollution.

Under a 2 degrees Celsius scenario where global carbon prices rise to $100 per metric ton by 2040, the companies on average face a 14% hit risk, ranging from 2.5% to 30% for individual companies, the report shows.

Leaders at the World Bank and International Monetary Fund have pushed governments to implement higher prices on carbon in order to force fossil fuel polluters to pay for the carbon dioxide they emit into the atmosphere. Cutting emissions alone, they say, is not enough to effectively combat climate change.

The EU’s carbon price, for instance, has more than tripled since 2018 and is expected to rise in upcoming years. ArcelorMittal, a multinational steel corporation headquartered in Luxembourg City, cited higher carbon prices in its decision to slash production in May.

Steel companies are not on track to reduce emissions or avoid financial losses from higher carbon prices. According to the report, while 60% of the companies have set emissions reduction targets, only two of them are aligned with a 2 degrees Celsius or below emissions target.

Those companies are SSAB, a Nordic- and U.S.-based steel company that aims to reach carbon neutrality by 2045, and South Korea-based Hyundai Steel, which aims for an 80% reduction in emissions by 2050.

“The pace at which the steel sector is reducing emissions is too slow for the transition to a low-carbon economy,” Fletcher said, “and it needs to deploy and commercialize radical technologies if it is to avoid looming carbon costs and remain competitive.”

There is also a geographic gap between higher and lower performing companies. The report showed that Chinese, Russian and U.S. companies lagged behind European and East Asian companies in developing low-carbon technologies.

“A lot of these regions don’t have stringent carbon pricing regulations,” Fletcher said.

“We found across the board that the companies doing well were setting ambitions and goals to reduce their emissions, looking toward the long term and embracing innovation.”

Some steel plants are working on steelmaking technology that would reduce carbon dioxide emissions and energy consumption, such as hydrogen steelmaking and electrolysis using clean electricity.

SSAB, for instance, is developing green hydrogen steelmaking technologies. ArcelorMittal is working on technology that uses electricity to reduce iron oxides, as well as technology that separates carbon dioxide from waste gases.

However, innovative technology couldn’t be implemented commercially until the 2030s and would raise the cost of steel production by 20% to 30%. Higher production costs could be a disincentive for companies to embrace new technologies, Fletcher said.

Still, more technologies to reduce carbon emissions are emerging, and the sector has also become a leader in recycling, as steel is now the world’s most recycled material.

“Companies are aware of the risks that these carbon costs represent, and they can reduce these risks by embracing cleaner technology and looking at their earnings profiles,” Fletcher said.