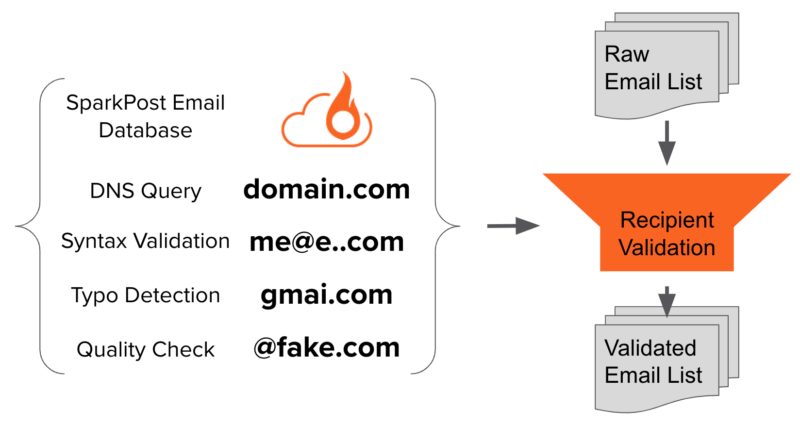 Email delivery firm, SparkPost, has announced new enhancements to its validation service, SparkPost Recipient Validation. According to SparkPost, the enhancements include additional data which doubles the number of bad email address it is able to detect. The feature identifies the bad email addresses using historical bounce data and analyzes the sending behavior of other SparkPost customers to allow customers to filters the bad emails.

“SparkPost uses typo detection, DNS checks, and especially historical bounce data from thousands of other customers, based on its sending 37% of the world’s B2C and B2B email,” said Charlie Reverte, chief product officer at SparkPost. “That way customers can remove bad emails from their lists before sending so they don’t hurt your sender reputation with ISPs.”

List management practices are a critical element to managed inbox optimization. Sending to bad email addresses and hard bounces will significantly hurt your deliverability. SparkPost’s capabilities could ease that process for marketers.

“Today’s inboxes are algorithmic: they work much more like your facebook feed than inboxes of 10 years ago,” Reverte told Marketing Land. “List management practices are crucial to getting good inbox visibility and staying out of the spam folder because inbox providers look very closely at your bounce and engagement rates.  If you’re not proactive in managing bad email addresses and unengaged recipients, you’re not going to get good visibility in the inbox and your competitors will.”

Many businesses likely have bots signing up via lead generation forms on their websites, often providing bad email addresses. Once a welcome email, for example, attempts to be delivered and returns a hard bounce, the result impacts their sender reputation, ultimately reducing deliverability to customers — and potentially losing legitimate prospects.


More on the news

I’ll be presenting on Managed Inbox Optimization during two sessions at MarTech East in Boston, September 16-18. I hope to see you there!

More about the MarTech Conference

Evaluate 100+ solutions in one place
Why marketers should embrace data privacy, rather than view it as an obstacle
To Top
error: Content is protected !!