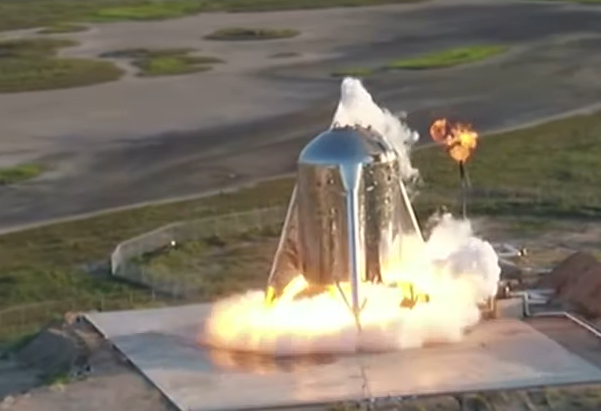 Seconds after the engine fired up, SpaceX stopped its first attempt to fly its prototype “Starship” rocket more than a few feet off the ground at the company’s facility in Boca Chica Beach, Texas on Wednesday.

The prototype rocket did not lift off from the ground, as SpaceX engineer Kate Tice noted while hosting a surprise livestream of the test. The rocket’s engine started but the prototype did not move and an enduring flame shot skywards near the top of the rocket. SpaceX was intending to “hop” the vehicle in a short flight of about 65 feet in the air.

“It appears as though we have had an abort on today’s test. As you can see there, the vehicle did not lift off today,” Tice said. “As I mentioned before, this is a development program, today was a test flight designed to test the boundaries of the vehicle.”

Known as “Starhopper,” the prototype rocket is the early version of the company’s Starship rocket. Starship, with an enormous booster called “Super Heavy,” is being built to achieve founder Elon Musk’s dream of transporting up to 100 people to destinations including the moon and Mars.

“Starship is a fully reusable system that is designed to provide cost effective and reliable launch services to our customers and serve as an interplanetary launch system,” Tice said.

“This specific test is one in a series of tests, designed to push the limits of the vehicle as quickly as possible, to learn all that we can as fast and safely as we can,” Tice said. She noted that Starhopper has passed several testing milestones already, including a test of the engine and its first “tethered hop” in April.

Despite a fireball erupting after an engine test last week, Tice said “everything looked good” after that test, “which brings us to our test hop today.”

The company is steadily raising funding for both Starship and its internet satellite network, called Starlink. So far this year, SpaceX has sought more than $1.3 billion across three funding rounds, CNBC reported in June. With over $1 billion already raised, SpaceX’s valuation has risen to more than $33.3 billion.

‘Our collective future is at stake’

Hurricane Dorian on track for Florida after strike in Caribbean