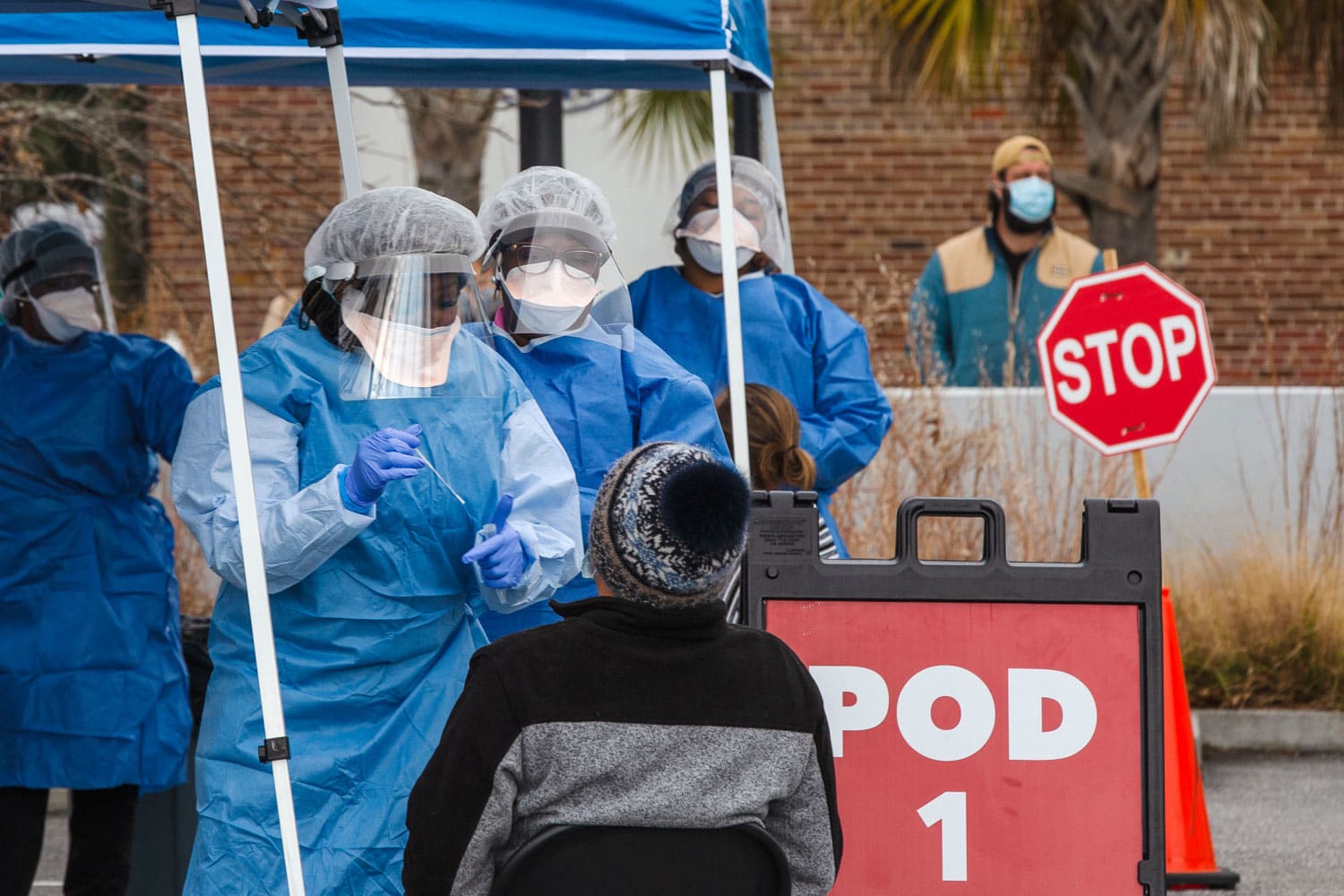 Healthcare workers from the Medical University of South Carolina administer free Covid-19 tests at a site in a parking lot between Edmund’s Oast and Butcher & Bee restaurants in Charleston, South Carolina, U.S., on Wednesday, Jan. 13, 2021.Micah Green | Bloomberg | Getty ImagesThe first Covid-19 cases in the U.S. of a new, highly contagious strain of the virus first found in South Africa have been detected in South Carolina, the state’s health department said Thursday.The South Carolina Department of Health and Environmental Control said the strain, known as B.1.351, was found in two adults with no history of travel or connection to one another. The Centers for Disease Control and Prevention notified South Carolina health officials late Wednesday that a sample that was tested at LabCorp was the B.1.351 variant, the health department said Thursday.The state’s own public health lab later “identified a separate case of the same variant” in a sample tested on Monday, the South Carolina Department of Health said in a statement. While the strain appears to be highly transmissible, it doesn’t appear to make people sicker, the health department said.”The arrival of the SARS-CoV-2 variant in our state is an important reminder to all South Carolinians that the fight against this deadly virus is far from over,” Dr. Brannon Traxler, the department’s interim director, said in a statement.Mutated strains of the coronavirus have migrated to the U.S. in recent weeks. Minnesota health officials on Monday identified the first U.S. case of a similar variant that was first detected in Brazil. The U.S. has also identified more than 300 cases with another strain first found in the United Kingdom, known as B.1.1.7, according to recent data from the CDC.The appearance of these new strains hasn’t come as a surprise to scientists. The U.S. is quickly trying to ramp up its surveillance efforts to track the new strains through genomic sequencing, which could be coming from abroad or “emanating from our own country,” Dr. Rochelle Walensky, the CDC’s new director, said last week.”CDC is early in its efforts to understand this variant and will continue to provide updates as we learn more,” the health agency said in a statement. “CDC’s recommendations for slowing the spread—wearing masks, staying at least 6 feet apart from others, avoiding crowds, ventilating indoor spaces, and washing hands often—will also prevent the spread of this variant.”Both strains of the virus found in the U.K. and South Africa share similar mutations, but experts say they developed separately. Although it’s no surprise the virus is mutating, researchers are quickly trying to determine what the changes might mean for recently developed lifesaving vaccines and treatments against the disease.The B.1.351 strain appears to be more problematic than the emerging variant found in the U.K., White House health advisor Dr. Anthony Fauci said on Wednesday. Fauci said during a press briefing that the vaccine-induced antibodies might be less effective in combatting that strain, though “it still is well within the cushion of protection.”Early findings published in the preprint server bioRxiv, which have yet to be peer reviewed, indicate that the B.1.351 variant can evade the antibodies provided by some coronavirus treatments and may reduce the effectiveness of the current line of available vaccines. On Monday, Moderna said its vaccine might be less effective against the B.1.351 strain and that it’s developing a so-called booster shot to guard against that variant “out of an abundance of caution.”Fauci, director of the National Institute of Allergy and Infectious Diseases, said in a CNN interview Wednesday that the new mRNA technology used to develop the Moderna and Pfizer-BioNTech vaccines — the only two so far to receive emergency authorization in the U.S. — can be easily tweaked to target the variants.Those booster shots wouldn’t need to go through the rigorous phase three clinical trials that required thousands of participants, he added.”You don’t have to do a 30,000 person trial or a 40,000 person trial,” Fauci said. “You work with the FDA and you could bridge information from one trial to another. Bottom line is we’re already on it.”‘Fueling Africa’s second wave’The World Health Organization warned Thursday that more contagious variants of Covid-19 are “fueling Africa’s second wave” and the variant first identified in South Africa “is predominant and powering record case numbers in South Africa and the sub-region.”According to the WHO, the B.1.351 strain has now been identified in in Botswana, Ghana, Kenya, the French Indian Ocean region of Mayotte, Zambia and 24 other non-African nations. As of Monday, Coronavirus infections in the region have grown by 50% since Dec. 29 when compared with the previous four weeks, the WHO said. Covid-19 deaths have also been on the rise, roughly doubling over that same period.The WHO said it’s working with the Africa Centers for Disease Control and Prevention to set up laboratories to conduct surveillance efforts in the Democratic Republic of the Congo, The Gambia, Ghana, Kenya, Nigeria, Senegal, South Africa and Uganda.The United Nations health agency said each country should send at least 20 samples to the labs, which will “help map the fast-evolving situation and best target responses at all levels.””The variant which was first detected in South Africa has spread quickly beyond Africa and so what’s keeping me awake at night right now is that it’s very likely circulating in a number of African countries,” Dr. Matshidiso Moeti, the WHO’s regional director for Africa, said in a statement.— CNBC’s Will Feuer contributed to this report.

More popular movies will be turned into TV shows in the streaming age
Toys R Us’ last two stores in the U.S. are reportedly closed for good
To Top
error: Content is protected !!