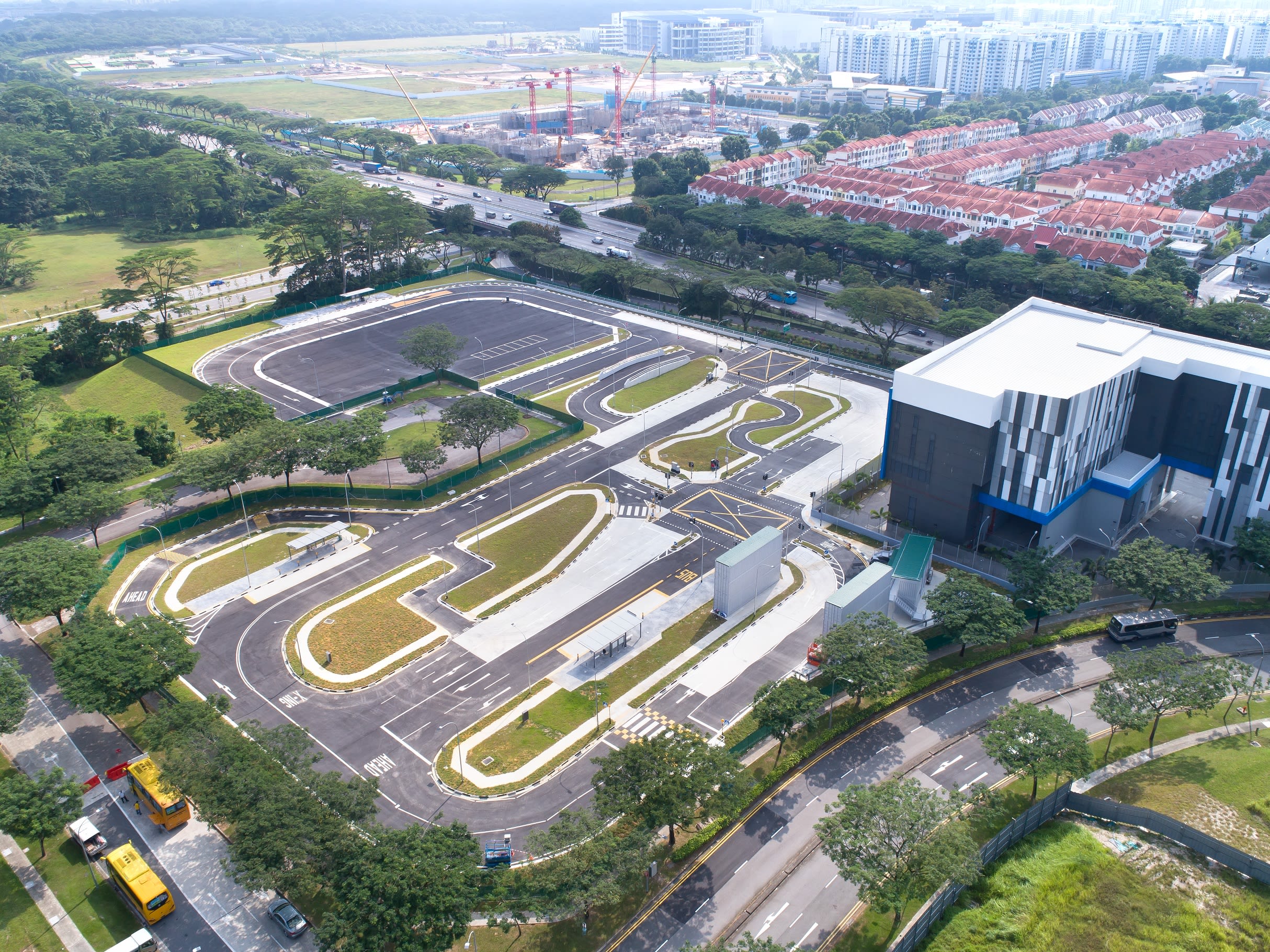 Aerial view of the Centre of Excellence for Testing & Research of Autonomous Vehicles (Cetran) in Singapore.Courtesy of Nanyang Technological UniversitySINGAPORE — The buggy takes off on the track, moving very slowly. No one is controlling it, but the wheel spins and the vehicle negotiates a left turn.As if led by a first-time driver, the driverless buggy jerks back and forth before halting abruptly when a pedestrian on the sidewalk gets closer to the road.This is where autonomous vehicles in Singapore are being tested — at the Centre of Excellence for Testing and Research of Autonomous Vehicles (Cetran). The buggy trial covered only a small distance of the 1.3-km track, where vehicles navigate street signs, traffic lights, climb a small hill and are tested in simulated rain and flooding conditions.Singapore is seeking to become a “smart nation” by using digital technology to boost the economy and improve government services. One such project is the development of autonomous vehicles, or AVs for short. It aims to get autonomous buses onto public roads in three districts around the island by the early 2020s.The coronavirus pandemic is unlikely to disrupt these plans, according to Satya Ramamurthy, head of infrastructure, government and health care at KPMG in Singapore.”We don’t see Covid-19 making the push towards (AVs) any less important,” he said, adding that self-driving vehicles provide “meaningful solutions” to labor challenges in the Asian financial hub.Additionally, Ramamurthy said there’s been a shift in preferences from mass public transport to private options in light of the coronavirus health crisis. Autonomous vehicles remain “very relevant” in reducing transmission risks, he added.The country appears to be making progress toward its driverless ambitions. In a KPMG survey in 2020 on how ready countries are for autonomous vehicles, Singapore came in first — up from second place in 2019.Risk scenariosBut experts say there are still some lessons to learn as Singapore continues to develop autonomous vehicles.They include how to deal with torrential rain, how to recognize when waiting passengers signal for buses to stop, and how buses can brake while ensuring passenger safety. There are also plans to test autonomous vehicles at night and on motorways.”How you evaluate every possible risk scenario is really the challenge from the testing perspective,” said professor Subodh Mhaisalkar, executive director of the Energy Research Institute at Nanyang Technological University. Scientists from the university operate Cetran alongside the Land Transport Authority (LTA), a Singapore government agency.An autonomous buggy at the test center Cetran (Centre of Excellence for Testing & Research of Autonomous Vehicles) in Singapore.Ana Nicolaci da Costa for CNBCOne of the country’s goals is to ease the pressure of a growing and aging population on roads by using autonomous vehicles to boost public transport.”We are a small country and land is always a constraint,” said Lam Wee Shann, chief innovation and transport technology officer at the LTA. “Meeting (the) diverse needs of our commuters is one of the challenges we face in transportation.”The idea is to have on-demand autonomous vehicles in the “first and last mile” of a commute, like the stretch between the train station to home, or from the train station to work, said NTU’s Mhaisalkar. That would help minimize the “pain points” of the commuter, such as uncertain and long waiting times for connections.In future, autonomous vehicles such as road-sweepers and vehicles carrying freight, could also work after-hours and at night, as the city seeks to ease road congestion, LTA said.Pilot deploymentAs Singapore prepares for autonomous buses to make their debut on public roads in the next few years, the government will be expanding the area where autonomous vehicles can be tested — from some individual sites currently, to all of western Singapore. This was in response to “industry feedback that a more varied testing environment will help accelerate technology development,” the LTA said last year.Self-driving vehicles must still be tested at Cetran before being authorized for trials on public roads.The scale of the pilot deployment, whether full scale or part of it, depends on the state of technology readiness, as well as whether the public accepts it as a mode of transport.Lam Wee ShannLand Transport AuthorityTechnology and public acceptance will also be factors determining whether Singapore is ready to launch its autonomous bus pilot program in the early 2020s, said LTA’s Lam.”The scale of the pilot deployment, whether full scale or part of it, depends on the state of technology readiness, as well as whether the public accepts it as a mode of transport,” said Lam. “The pilot deployment is going to be the first time we actually run AV buses as a public transport service to our people; we are not going to rush.”In the KPMG survey, Singapore led in categories on policy and legislation, as well as consumer acceptance, but came in 11th for technology and innovation.Attracting business?Singapore could attract business by bringing AV companies into the city-state, as well as create more high-skilled jobs in the transport sector, said KPMG’s Ramamurthy.For example, instead of a bus driver, the autonomous vehicles could have bus operators who provide customer service and who have the skills to take control of the vehicle if required.He added that the “upskilling” of drivers — or teaching workers new skills — should minimize any job cuts among locals.Driverless road sweepers at the test center in Singapore, known as the Centre of Excellence for Testing & Research of Autonomous Vehicles (Cetran).Ana Nicolaci da Costa for CNBCStill, LTA’s Lam said the government was mindful of “disruption” to public transport workers as a result of deploying autonomous vehicles and has been engaging with unions to help them understand where the state of technology is and the kind of new jobs AVs will bring about.Many of these issues would have to be ironed out before autonomous vehicles become the norm.”We are quite far from a mass deployment,” Lam said.