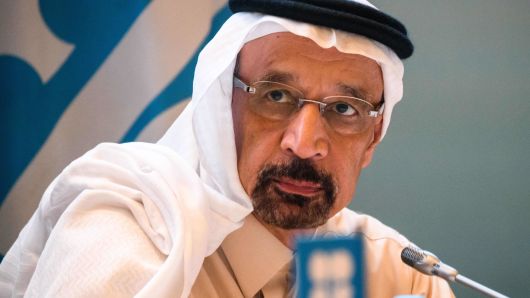 Saudi Arabia’s Energy Minister Khalid al-Falih attends a press conference at the end of the 13th meeting of the Joint Ministerial Monitoring Committee (JMMC) of OPEC and non- OPEC countries in Baku on March 18, 2019.

Saudi Arabia’s Energy Minister Khalid al-Falih said on Wednesday that the kingdom’s crude production would remain within levels outlined in OPEC-led output cuts but the top oil exporter would also be responsive to its customers’ needs.

Falih said “there will be very little variation” in the kingdom’s oil production in May from the past couple of months, and Saudi Aramco’s crude allocations for June would be made in a couple of weeks.

SoftBank to invest $1 billion for a 6% stake in payments firm Wirecard
corporate earnings, economic data in focus
To Top
error: Content is protected !!