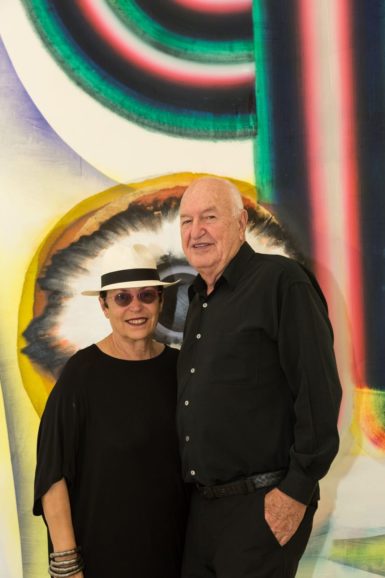 Portrait of Mera and Don Rubell.

One of Miami’s biggest contemporary-art institutions is reopening—and expanding—later this year.

The Rubell Family Collection, a private museum in the Florida city first opened by Mera and Don Rubell and their son Jason in 1993, is set to swing open its doors once again on December 4, just one day before Art Basel Miami Beach opens to public.

The museum’s new location will be at 1100 Northwest 23rd Street in the city’s Allapattah neighborhood. Through the move, the museum has grown significantly. Whereas its current location in Miami’s Wynwood district occupies 45,000 square feet, the new space, designed by Selldorf Architects, will now take up 100,000 square feet of space. As part of the relocation, the family’s institution is renaming itself—it will now be called the Rubell Museum.

Some 80 percent of the new building will be given over to 40 galleries that will be accessible to the public. Also on site will be a space for performances and special events, as well as a 40,000-volume research library, a restaurant, and a store.

“We were just looking for storage, and we wound up with this extraordinary space,” Mera Rubell told ARTnews. “It was just too good to be storage.”

The new Rubell Museum will host works from the family’s collection, which Don and Mera Rubell launched in 1965. The family now owns 7,200 works by over 1,000 artists, with high-end names such as Keith Haring, Jean-Michel Basquiat, Jeff Koons, Cindy Sherman, Rashid Johnson, and Cecily Brown represented in their holdings.

The Rubell family’s institution has been based in its current space, located in a former Drug Enforcement Agency building, since 1993. There, the museum has hosted a variety of important exhibitions, including “30 Americans,” a survey of contemporary black art that has since traveled to 15 venues across the nation, and a sizable Purvis Young survey.

Miami’s Allapattah neighborhood has been a site of recent redevelopment, and Rubell noted that, nearby the museum’s new site, there are going to be several vacant warehouses. Despite some experts’ concerns that the influx of new businesses could spur on gentrification in the city, Mera said, “It doesn’t really affect the residential—the residents can stay there. To have art repurpose these buildings is exciting for the neighborhood.”

Mera emphasized that, in its new space, the Rubell Museum will rotate its special exhibition programming more frequently while also hosting long-term displays of works in the collection. Some 65 percent of the exhibition space, she said, would be given over to these installs with lengthier runs. “That’s a big deal for us, because before, we’ve literally had to shut down the building in order to do installations,” she explained, adding, “It gives us a chance to show more art, and that’s what we love doing.”