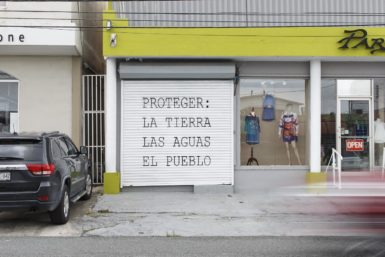 For the first time since opening in 2015, Embajada gallery, one of the most notable galleries in Puerto Rico, has an artist roster. Among the artists that the San Juan–based enterprise now represents are Gabriella Torres Ferrer, Dalton Gata, Jorge González, Daniel Lind Ramos, Claudia Peña Salinas, Manuel Mendoza Sánchez, and Chemi Rosado-Seijo.

“Our process is intuitive and organic,” Manuela Paz, Embajada’s cofounder, told ARTnews of the gallery’s method for adding artists to its roster. “Of course, we are keeping an eye on [our] mission, which is to promote Puerto Rican and Caribbean and Latin American artists within an international dialogue.”

Embajada is one of a handful of Puerto Rican commercial galleries that participates in major art fairs such as Frieze, NADA, and the Material Art Fair. Located in San Juan’s Hato Rey neighborhood, it is among the few galleries on the island with international visibility.

Christopher Rivera, the gallery’s other cofounder, said he feels it’s necessary to bring these artists to audiences outside Puerto Rico. “They have a very impactful way of working within their communities,” he said. “That’s very important for us.”

Joe Overstreet, Purposeful Painter Who Made Space for Artists of Color, Is Dead at 85 -ARTnews
Rubell Museum in Miami to Open in New 100,000-Square-Foot Space in December -ARTnews
To Top
error: Content is protected !!