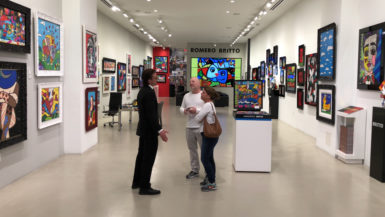 It’s hard to beat a good art-television crossover event, and last night saw a big one, with artist Romero Britto—whose relentlessly cheery cartoon-style works fill cruise-ship galleries all around the world—making an appearance on the hit television show The Real Housewives of New York, which is now in its 11th season.

In the episode, two of the show’s stars, Bethenny Frankel and Luann de Lesseps, bring a group of fellow housewives to the Wynwood district in Miami to take a tour of the area’s many murals—and to visit one of the shops where Britto hawks his art. However, there is drama: one of the wives, Ramona Singer, decides to take a cab elsewhere, saying she would prefer to do something other than look at art.

At Britto’s shop, where the artist was on hand, Frankel very generously gives each housewife a Swarovski crystal–bedazzled heart sculpture designed by the artist, reportedly priced at $8,000. Bummer for Singer! (In case you are curious about resale potential of such an object, Britto does indeed have an auction history, and his record stands at $250,000, for a portrait of John and Jackie Kennedy, American Dream, from 2014, that sold in 2015 in a Sotheby’s contemporary day sale.)

The group also pays a visit to the studio of local artist Peter Tunney, who makes a few sales to the visitors. (New York socialite Tinsley Mortimer picks up an Andy Warhol soup can–inspired piece, that she says she plans to turn into a purse.)

Later in the episode, Frankel speaks, in a sense, to the devotion required to build an art collection. Alluding to Singer’s decision to skip out, she says, if you do that, “you are going to miss out on some special treasures.” Words to keep in mind as Basel begins next week.