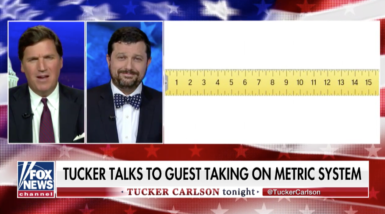 Tucker Carlson and James Panero in a segment called “Can the U.S. continue to stand alone against the metric system?”

James Panero, art critic and executive editor of the conservative journal the New Criterion, appeared on Fox News Wednesday night to discuss the metric system with Tucker Carlson, who has come under fire over the years for promoting white supremacist conspiracy theories and making misogynistic comments. As you may have guessed, Panero and Carlson are not fans.

From Carlson’s perspective, the metric system, if adopted by the United States, would bring the country under the “yoke of tyranny.” Panero spent most of his time on air outlining the metric system’s origins in the French Revolution, though most historians believe that its true founder was Gabriel Mouton, the vicar of St. Paul’s Church in Lyon, France, who proposed a version of the system in 1670.

Panero said that, with customary units in the U.S., “I can still cook the recipes of my grandparents. And it’s that connection to the past that the French Revolution and the revolutionaries have always tried to destroy.”

He went on to assert that the metric system is “totally made up,” and Carlson called it “Robespierre’s favorite standard of measurement.”

Carlson ended the segment on an isolationist note: “I’ll accept the kilometer when we accept the euro—never.”