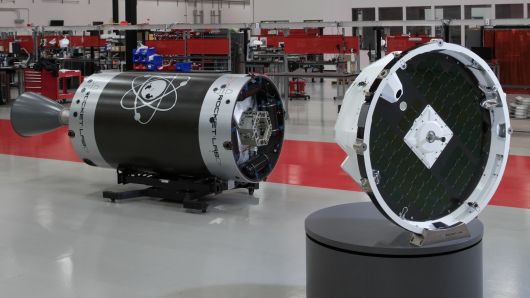 Rocket Lab’s “Photon” satellite platform, on the right, is shown at the company’s factory alongside an upper stage of the Electron rocket.

Rocket Lab’s primary business is building and launching small rockets, which send spacecraft about the size of a refrigerator into orbit. The company’s Electron rocket is priced at about $6.5 million to $7 million per launch but now, due to the expanded capabilities provided by Photon, Beck said the price “goes anywhere up” from there.

“Launch was the first bit that we needed to solve … but it always seemed crazy to me” that the rocket builder did not also build the hardware for a satellite, Beck said. Photon means satellite companies don’t need to “invest millions of dollars” in bringing together a team and manufacturing complex space hardware.

“Any customer that has built a spacecraft can stand back and now reassess whether they still need to build their own,” Beck said. “The real game changer here is the reduction in time and pain to generate revenue is enormous.”

The company calls Photon a highly-evolved version of the company’s “kick stage,” which Rocket Lab has successfully used four times to deliver payloads to specific orbits.