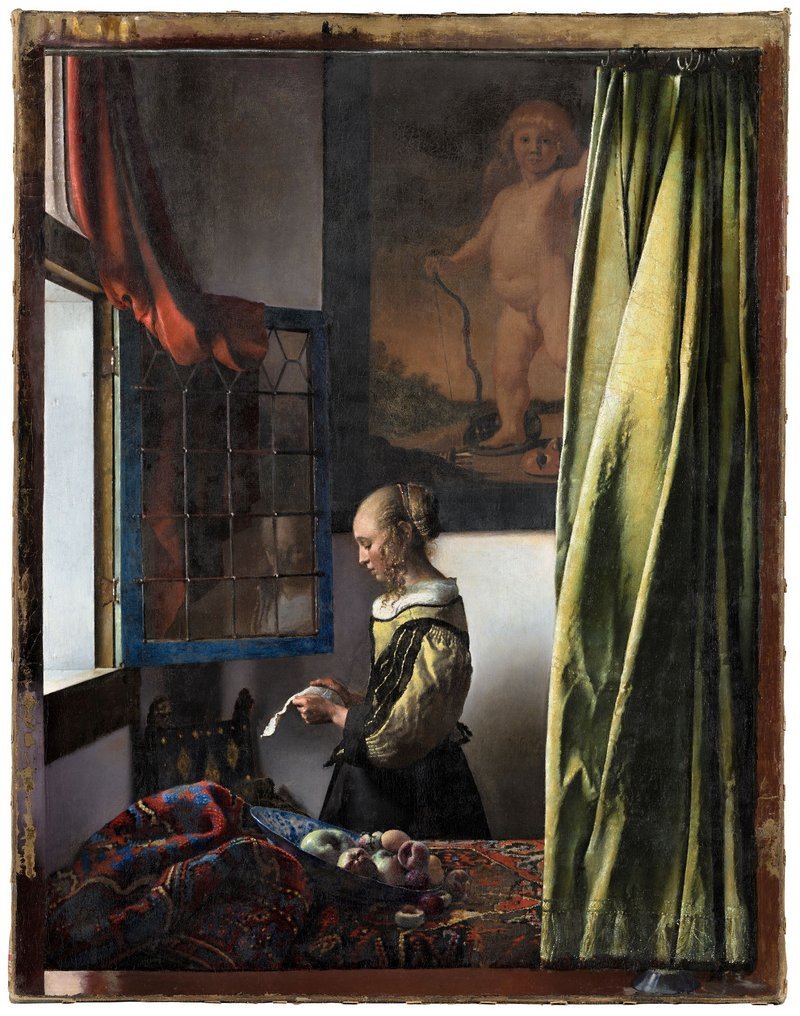 Two years ago, the Staatliche Kunstsammlungen Dresden in Germany launched a major restoration to make visible a Cupid buried beneath layers of paint in Johannes Vermeer’s Girl Reading a Letter at an Open Window (ca. 1657). The museum has since removed the overpainting from the famed work, which now shows an image of Cupid hanging on the wall behind the forlorn young woman.
Scholars believe that the newly revealed picture is meant to indicate that the woman is reading a love letter. Now, the public will get a chance to test that theory. The restored canvas will be on view to the public for the first time this September, at the museum’s painting gallery, the Gemäldegalerie Alte Meister.

Uta Neidhardt, senior conservator and curator of the exhibition, said in a statement that the newly revealed image offers an “occasion to rethink” the painting’s meaning.
The painting, completed sometime around 1657, was acquired for Dresden’s city collections in 1742 and has since been a centerpiece of the painting gallery. For years, the painting was misattributed, first to Rembrandt, then to Pieter de Hooch. It was labeled a Vermeer in 1880, after French art critic Théophile Thoré-Bürger came upon it in the gallery.
The existence of the concealed Cupid was first detected in 1979 during an X-ray analysis of the painting. Researchers suspected at the time that Vermeer himself had painted over the Cupid image, leaving a blank white wall behind the young woman. In 2017, the Staatliche Kunstsammlungen Dresden’s painting conservator, Christoph Schölzel, began a more comprehensive inspection of the canvas that revealed the overpainting was added sometime during the 18th century after Vermeer’s death.
“With the recovery of the Cupid in the background, only the actual intention of the Delft painter becomes apparent,” Stephan Koja, director of the Gemäldegalerie Alte Meister, said in a statement. “Beyond the superficially amorous context, it is a fundamental statement about the essence of true love.”
Girl Reading a Letter at an Open Window was previously displayed in a semi-restored state in 2019 in the Gemäldegalerie Alte Meister. The Cupid was only half-exposed, as researchers were still in the process of removing a thick layer of varnish that had darkened over time, lending a yellowish tinge to the cool colors of the painting. To carefully scrape away the layers of overpaint, Schölzel used a microscope and a scalpel, which helped preserve the original paint.

The fully restored painting will be the centerpiece of the show this fall. It will be joined by nine other paintings by Vermeer, including the Woman in Blue Reading a Letter (1663–64), on loan from Amsterdam’s Rijksmuseum, and the Lady Standing at a Virginal (1670–72). (Those paintings represent roughly a quarter of all the known canvases Vermeer ever produced.) Some 50 works of Dutch painting from the second half of the 17th century, including pieces by Pieter de Hooch, Frans van Mieris, and Gerard Ter Borc, will also be on display.