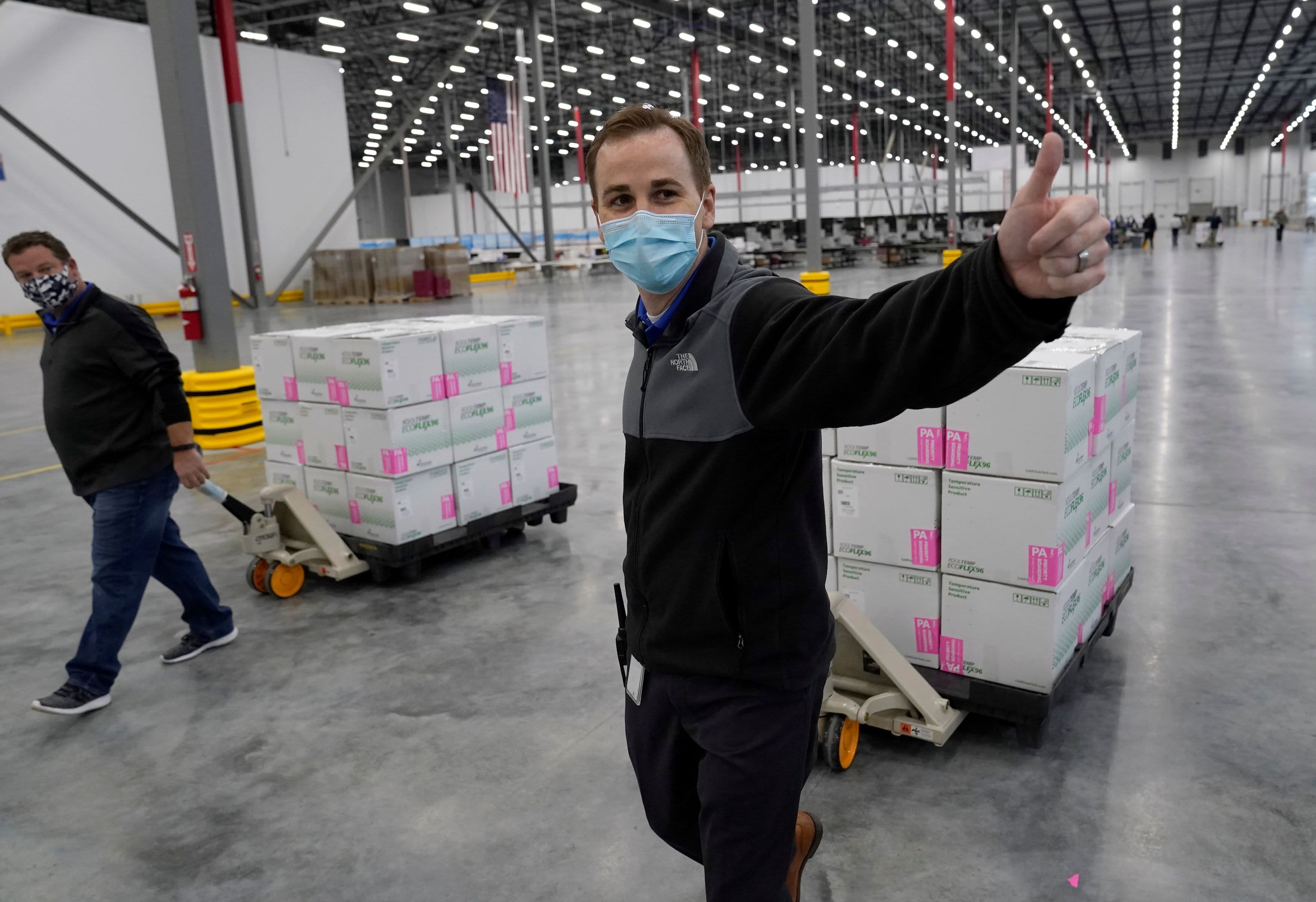 Boxes containing the Moderna COVID-19 vaccine are prepared to be shipped at the McKesson distribution center in Olive Branch, Mississippi, U.S. December 20, 2020.Paul Sancya | ReutersThe Biden administration’s plan to release nearly every available dose of Pfizer’s and Moderna’s coronavirus vaccines to states shouldn’t cause any supply issues down the road, a member of President-elect Joe Biden’s Covid-19 advisory board said Thursday.The advisory team has had numerous conversations with vaccine makers Pfizer, Moderna and Johnson & Johnson, among others, about supply issues, said Dr. Celine Gounder, who sits on the panel and is an infectious disease specialist at the NYU Grossman School of Medicine.Barring some unforeseen “manufacturing snafu,” the Biden administration is “confident” there won’t be problems getting people their second shots on time, she said.”That’s not something we’re too worried about,” Gounder told the Johns Hopkins Bloomberg School of Public Health during a webcast Thursday afternoon. “If you look at the timeline for production, they are actually going to be releasing more and more doses over time, so that really does open things up significantly.”Gounder’s comment comes hours before Biden is expected to unveil his plan to vaccinate the U.S. population and bring an end to the pandemic that has killed at least 385,503 Americans in nearly a year. Biden has been critical of the Trump administration’s vaccine rollout strategy, saying at the current pace “it’s going to take years, not months, to vaccinate the American people.”The pace of vaccinations in the U.S. is much slower than officials had hoped. As of Wednesday at 9 a.m. ET, more than 29.3 million doses of vaccine had been distributed across the U.S., but just over 10.2 million shots have been administered, according to data compiled by the Centers for Disease Control and Prevention. The number is a far cry from the federal government’s goal of inoculating 20 million Americans by the end of 2020 and 50 million Americans by the end of this month.Some state governors, including New York Gov. Andrew Cuomo, have complained about vaccine availability, saying the lack of doses has inhibited their ability to vaccinate people.The Trump administration on Tuesday adopted Biden’s plan to release most of the doses it had held back for the second round of shots of Pfizer’s and Moderna’s two-dose vaccines.Gen. Gustave Perna, who oversees logistics for President Donald Trump’s vaccine program, Operation Warp Speed, had previously said setting spare Covid doses aside was “good Army general officer planning,” making sure the right people can get the shots when needed.In an attempt to speed up the pace of vaccinations, the Trump administration also changed the way it allocates vaccine doses to states and the CDC expanded the vaccine eligibility to everyone 65 and older as well as to those with comorbid conditions, such as diabetes and heart disease.Some public health experts have questioned whether companies can manufacture more doses before people need their second shots.Gounder said Thursday that the administration still plans to keep “a small buffer” of doses in reserve.”We’re going to be releasing nearly all [doses] with a small buffer leftover because we want to accelerate the pace at which vaccinations is going,” she said. “This is really a decision about how to manage the supply. It’s not a recommendation about the dose of vaccination or schedule.”