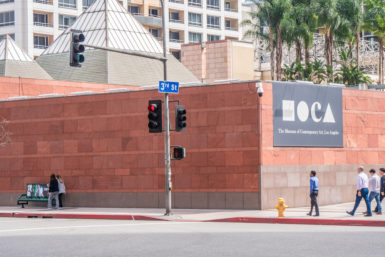 See what is on display in Art Basel’s thrilling Parcours section, with sculptures scattered around the city’s Old Town. [ARTnews]

Christopher Knight reviews the first free exhibitions at MOCA Los Angeles: “Following a tumultuous decade of fiscal and operational difficulties, MOCA may just be on a welcome—and timely—rebound,” he writes. [Los Angeles Times]

Chicago’s Art Institute new exhibit “Manet and Modern Beauty” features a rare look at the artist’s Jeanne (Spring) from 1881, which has remained in private hands for over a century until it was bought by the J. Paul Getty Museum in 2014. [Chicago Tribune]

As protests over Hong Kong’s extradition bill rage on, some 100 art spaces closed in solidarity, including the Hong Kong pavilion of the Venice Biennale. [South China Morning Post]

Lehmann Maupin’s lawsuit against former employee Bona Yoo, who the gallery accused of stealing trade secrets, has been dismissed. [ARTnews]

Françoise Gilot’s controversial memoir Life With Picasso is being republished by New York Review of Books Classics later this month. The now-97-year-old artist and former partner of Picasso says, “Sometimes people like you. Sometimes people don’t. But you are not going to fashion yourself according to other people’s wishes, whether they are negative or positive, you know?” [The New York Times]

Animal Collective’s Avey Tare wrote about art that inspires him, from paintings by Deborah Remington to Rocky & Bullwinkle cartoons. [ARTnews]

Rebecca Wei, Christie’s chairman of Asia, spoke about trends among emerging collectors in the region. “I would say the majority tend to look for art from their own country, with which they can associate emotionally, feel they understand, and can enjoy day to day,” she said. [Observer]

A handwritten-note from the desk Harvey Milk is going up for auction at Swann Auction Galleries’ “Pride Sale” later this month with an estimated value of $4,000-$6,000. The note is from the one day in 1978 that the lauded gay rights advocate served as mayor of San Francisco. [Hyperallergic]